LUCKY SEVERSON, correspondent: This is a Buddhist temple unlike any other. It is the heart and soul of the fastest growing Buddhist movement in Thailand and probably the world. It’s called Dhammakaya. Both the temple and the movement are controversial.

RACHELLE SCOTT (Associate Professor and Associate Head, Department of Religious Studies, University of Tennessee): Critics question the intentions of the temple. They think that the primary intention is to raise money to be big, to be global. 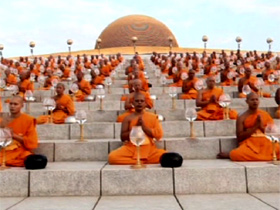 SCOTT: They want the Dhammakaya temple to be like Mecca is in Islam, a global center; they want to bring Buddhists from all over the world.

SEVERSON: Rachelle Scott is a scholar on the movement and assistant head of religious studies at the University of Tennessee. She says an unusually high percentage of Dhammakaya monks are college-educated and speak more than one language, which makes it easier for them to proselytize temple visitors. This is the assistant abbot, Phra Tanna.

PHRA TANNA: So basically once they look at the building and they see the shape, they say wow and they started to want to know more about the building, why it has that shape.

SEVERSON: One thing that draws them in is the flying-saucer shape of the building, and if they like what they see, the monks and their assistants will do what they can to bring them into the movement. That’s the part that doesn’t sit right with Sulak Sivaraksa, an esteemed Buddhist scholar in Bangkok. 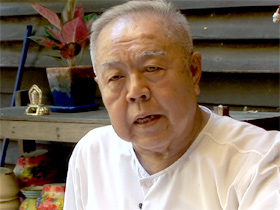 SEVERSON: The converts they provided seem quite pleased with what they’ve found here.

WOMAN CONVERT: I’ve reached happiness. I found the truth in myself.

WOMAN CONVERT: And once I’ve been here I think I learn much more than my academy education, master’s degree or PhD. I learned the truth in life, learned how to be with myself and happiness within.

SEVERSON: Another thing that sets the movement apart is the Dhammakaya method of meditation. In traditional Buddhism, it’s the monks who are usually doing the meditating. Here it’s everyone.

SCOTT: They employ a visualization technique whereby which one envisions a crystal ball outside of one’s body, and then one watches that crystal ball enter through the nose into the head, down to the navel and then rests two finger widths above the navel. As one develops the ability to concentrate in that way can facilitate states of happiness, bliss. 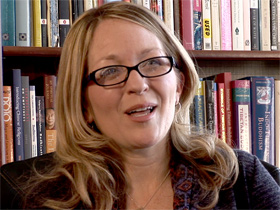 SEVERSON: And they believe the more people who meditate together, the greater the power.

WOMAN CONVERT: When you take a look at number of people, thousands of people sitting together quietly and meditate, how do you feel? You feel something very wonderful. So once we gather together, the more the better. We can bring the good thing to the world.

SEVERSON: There is a legend here that mass meditation prevented Bangkok from being bombed by the Japanese during World War II. They see meditation as a powerful tool for society and for the individual.

SEVERSON: The movement we know today began in the 1970s, although its roots stretch back to the beginning of the century and, some would argue, back to Buddha himself. But where other Buddhist movements have seen a decline in the number of young men 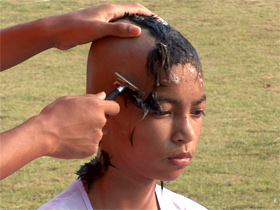 willing to get their heads shaved to become monks, Dhammakaya continues to attract.

(to Buddhist monk): Some of them seem very young.

PHRA SANDR: Yeah, yeah. You can actually become a novice from 7 years old, but usually in our temple they’re about 10 or something like that.

SEVERSON: Buddhist scholars say one reason Dhammakaya has been so successful is that it fits the times. Thailand has developed into a modern country at a breakneck speed. Traditionally most young men would become monks for a few months at least. Now the temptation is to get a job and make money. In fact, it’s the growing middle class in particular that Dhammakaya appeals to.

SCOTT: It’s not shy about saying if you come to the temple and you offer money, you’ll get this worldly benefit.

SCOTT: In temple publications it’s very clear that this worldly success, this worldly prosperity is one of the many rewards one gets as a result of giving money to the temple. 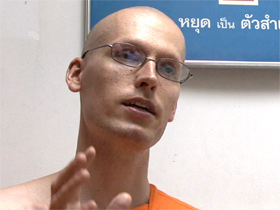 SEVERSON: Phra Sandr is from the Netherlands and has a master’s degree in organizational psychology.

PHRA SANDR: People often think that Dhammakaya only cares about donations, or cares about getting people to the temple, but that it is just an impression based on outer appearances. But that is not what Dhammakaya really is about. When people come here for a while they notice that there is also a very important inner core, where people are learning to practice character.

SEVERSON: Most of the money comes from donations, also known as “merit making.” It works like this: do a good deed or give money and you’ll be rewarded in this life and the next. Rachelle Scott maintains this is a longstanding Buddhist tradition and one Dhammakaya has refined to a fine art.

PHRA TANNA: If anyone would have this merit they will be safe in their transportation, for example. If a whole airplane that crashed, one people that could survive, that’s because he or she has the merit. This is what the Buddha taught, and we believe the same thing.

SCOTT: One of the programs was this idea of giving money on a regular basis would ensure wealth in this life and in future lives as well. So not just a millionaire today, but a millionaire in the future as well.

SULAK SIVARAKSA: What the Dhammakaya try to do, I feel, is a distortion of the message of the Buddha, because they want to be successful, and to be successful in this day and age you have to go along with capitalism and consumerism.

PHRA TANNA: Wealth is not a bad thing. It’s very useful if you know how to use it. It must be useful for yourself, for your family, for the society, and for the whole world.

SEVERSON: As Dhammakaya continues to grow, the criticism grows more muted. The movement now has centers in 30 countries with more planned and, we were told, almost 5 million followers on Facebook.

The Wat Phra Dhammakaya, north of Bangkok, Thailand, is the world’s largest Buddhist temple and one of the fastest growing groups within Buddhism. As many as one million followers can participate in corporate meditation in the temple courtyard. But Dhammakaya also has its critics, who question the motives of its leaders and ask whether nirvana is for sale at this temple unlike any other. “People often think Dhammakaya only cares about donations or cares about getting people to the temple, but that is just an impression based on outer appearances,” says Phra Sandr, a Buddhist monk from the Netherlands. “When people come here for a while they notice that there is a very important core where people are learning to practice character.”

Decline of Buddhism in Thailand