FRED DE SAM LAZARO, correspondent: The communist party flag still flies high in Vietnam. But on the ground consumerism and capitalism are thriving—at least in cities like Saigon and the capital, Hanoi, which have grown rapidly.

FLORIAN FORSTER (United Nations Organization for Migration): You see an enormous amount of mobility within the country, rural, urban migration happening at a large scale.

DE SAM LAZARO: However, Forster says the strong economic growth of recent years has not been enough to absorb millions of young entrants to the job market in this nation of 90 million.

FORSTER: We have currently about 400,000 Vietnamese migrant workers being deployed abroad at any time, with 80,000 leaving every year, and whenever you have migration, which is a positive driver and a positive force, then you have also the exploitation and abuse coming with it. And that leads to trafficking. 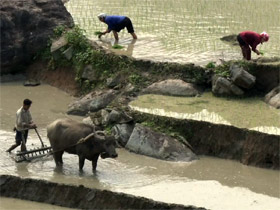 DE SAM LAZARO: The heart of both the sex and labor trafficking problem—and much of Vietnam’s poverty—lies in the rural hinterland, still home to two-thirds of the population. This is Vietnam’s back door—the rugged, mountainous, remote region along the northern border with China. It’s a porous border through which thousands of Vietnamese women, children, and some men are trafficked each year. Exact numbers are hard to pin down, and that’s just one of the challenges in getting a handle on this complex problem. China is a giant magnet. Its wages are higher, and it is a transit point to other countries. China is also an involuntary destination for many young Vietnamese women. China's one-child policy—combined with a cultural preference for male children—has created a shortage of brides. California-based Diep Vuong, originally from Vietnam, founded the Pacific Links Foundation, which helps victims who’ve managed to escape.

DIEP VUONG (Co-Founder and Board President, Pacific Links Foundation): The girls that we see they are given a choice: Do you want to marry somebody or do you want work in the brothels? And one of the girls told us she said, you know, they told us if we work in brothels we’ll be staying near the border, and so some girls say I’d rather stay here because it’s closer to Vietnam and that may be able to run back.

DE SAM LAZARO: Vuong brought me to visit 23-year-old Lan, who was able to run back.

LAN: I don’t know where I was taken, we were in the car ride for a day, and they wouldn’t let me out of the car, then I realized that I’d been tricked. 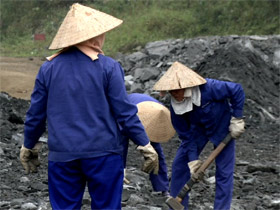 DE SAM LAZARO: Hers is a classic story of how traffickers prey on desperately poor people. Lan was working on a road-building crew. It’s back-breaking work in hot stifling weather, and it’s to her work-site that the recruiter came with a better offer: to harvest cinnamon for higher wages. She and two others took the bait, but Lan was the only one who managed to return to her village. The other two have not been heard from since. Lan said she was held in a home across the border in China before being taken to a place she thought was Beijing, where she encountered the police.

LAN: When we got to Beijing, there were a lot of policemen around, so I ran to them and asked them to help me. They showed me a computer screen, and I was able to convey to them that I was from Vietnam.

DE SAM LAZARO: But after clarifying a few questions, Vuong determined Lan wasn't describing Beijing, but rather, an airport. She’d never seen one before.

VUONG: You see airport pictures all the time, the Malaysian Airlines, and all that, and then you come across people who are actually at the airport and don't even know that they've been at the airport.

DE SAM LAZARO: Lan was fortunate in one critical way: her family welcomed her back. She’s since married and has a one-year-old son. Often victims must deal with stigma, shame, and rejection from their families.

HUE: My mother doesn’t care to see me anymore. In my village, there were some young women who had returned from China, and I remember looking down on them, and that’s how I 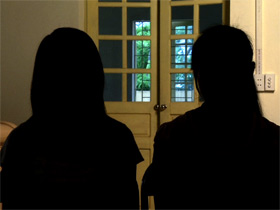 thought people were looking at me.

DE SAM LAZARO: Hue and Phuong—we were asked to shield the identities of trafficking victims—were vulnerable to peer pressure, and seemingly compelling requests for help.

HUE: There was this boy, he lived below us, and he told me that his brother had a bad accident in China. And he asked me if I wanted to go with him to take care of his brother.

PHUONG: My cousin told me he was dumped by his girlfriend and really depressed, and asked if I would go and hang out with him.

DE SAM LAZARO: But their friends lied to them. Each teenager was handed over to members of shadowy trafficking networks.

HUE: We were told that if we didn’t agree to be wives, we would be sold into brothels.

DE SAM LAZARO: Phuong agreed. Hue did not and was sold to a brothel, where she was held for several days but not yet put to work.

HUE: They were waiting to find a client for me. Luckily there was a police raid, and because we didn’t have papers the police took us away. 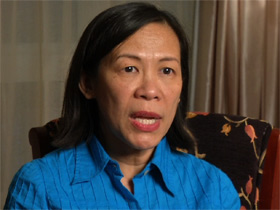 VUONG: The Ministry of Public Security had said that–they–of all the people they arrested as trafficker, 60 percent of them had been trafficking victims themselves.

DE SAM LAZARO: Vuong described one encounter she had with a 17-year-old who was severely beaten in captivity and released on condition that she recruit more young women, which she agreed to do.

VUONG: And she said, well, I told them, you know, they will work at this restaurant and so she didn't say that they would have to serve as prostitutes.

DE SAM LAZARO: So why would she feel compelled to feed this trade then, if she was by now free?

VUONG: I think, well, I think that, I don't know, do you ask of the abused woman who's abused by her husband why she goes back to her husband, or why she let her husband beat up on their children knowing that the harm she suffered is terrible enough?

DE SAM LAZARO: For young women unable to return to their families, Vuong's group provides safe haven. They learn basic life skills like cooking and can complete their schooling. About 4,000 young women have received scholarships with money Vuong raises through private donations. That enables them to go to school and where possible train for job skills. One partner is another nonprofit called Know One Teach One or KOTO. Its restaurants and culinary schools in Ho Chi Minh City and Hanoi train disadvantaged youth.

DE SAM LAZARO: For her part, fifty-year-old Diep Vuong, who fled Vietnam after the war, plans to keep pushing to strengthen this country's anti-trafficking laws.

VUONG: I became a boat person when I was 16, and I spent three days at sea and I arrived in Singapore realizing for the first time that I am stateless, and all the vulnerabilities that I saw during those times, I don’t want to see it on anyone. Being a Buddhist, in some ways–not very devout. I feel that, you know, there are times to do things, and clearly there was a time for me to study, there was a time for me to take the crossing of the sea to understand how vulnerable people are, and so there’s a time to do something and just do it.

DE SAM LAZARO: In 2013, Vietnam arrested nearly 700 alleged traffickers and identified some 900 rescued victims. Most experts agree there are deficiencies in both anti-trafficking laws and their enforcement and that those numbers represent a small fraction—Vuong says a tenth, perhaps, of the true figures.

For Religion & Ethics NewsWeekly, this is Fred de Sam Lazaro in Hanoi.

Vietnam’s modernized cities create an appeal for the newly educated and workers from rural areas. Across the border in China, a shortage of young brides has led to a system of deceiving Vietnamese into forced labor and marriages. “Whenever you have migration, which is a positive driver and a positive force,” says Florian Forster of the United Nations Organization for Migration, “then you have also the exploitation and abuse coming with it. And that leads to trafficking.” The California-based Pacific Links Foundation offers safe haven for young women who escape human traffickers on the Vietnam-China border . “The girls that we see, they are given a choice,” says the foundation’s co-founder and board president Diep Vuong, “Do you want to marry somebody or do you want work in the brothels?”