TIM O’BRIEN, correspondent: The case was brought by Hobby-Lobby, a national chain of craft stores owned by a devoutly Christian family. The family objects to provisions in the Affordable Care Act that require them to provide insurance coverage for contraception methods that they view as tantamount to abortion—such as the “morning after pill.”

STEVE GREEN (President, Hobby Lobby, Inc.): This is an issue of life. We cannot be part of taking life, and so to be in a situation where our government is telling us that we have to be is incredible.

O’BRIEN: Hobby Lobby relies heavily on a 1993 law called the Religious Freedom Restoration Act, landmark legislation that states that the federal government “shall not substantially burden a person’s exercise of religion” unless it is “the least restrictive means of furthering a compelling government interest.” The court is expected to use the Hobby Lobby case to determine just how much religious freedom the law actually restores—and for whom. 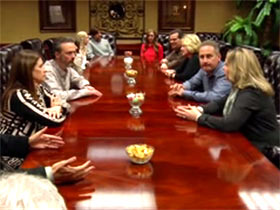 When the case was argued last March, the court’s more conservative justices appeared supportive of Hobby Lobby, but others questioned whether corporations like Hobby Lobby have any religious freedom at all:

Justice Elena Kagan: “The Congress has made a judgment, and Congress has given a statutory entitlement, and that entitlement is to women and includes contraceptive coverage, and when the employer says, ‘No, I don’t want to give that,’ that woman is quite directly, quite tangibly harmed.”

At the heart of the case: just how far does the Religious Freedom Restoration Act reach?

Justice Sonya Sotomayor: “Is your claim limited to sensitive materials like contraceptives, or does it include items like blood transfusions, vaccines?”

Not specifically mentioned in the court’s arguments, but very much on the line in this case: gay rights. While many cities prohibit discrimination based on sexual orientation, accommodating gays and lesbians may violate the religious convictions of some employers and landlords. What happens then?

When Congress passed the Religious Freedom Restoration Act, it explained that courts were to strike what it called “a sensible balance between claims for religious liberty and the interests of government.” “A sensible balance”: Easier said than done, as Monday’s decision in this divisive case is all but certain to demonstrate.

Editor’s Note: On Monday, June 30, a deeply-divided U.S. Supreme Court ruled that some for-profit corporations cannot be required to provide their employees contraception coverage which violates their religious beliefs. Watch our video of reactions to the ruling outside the court.

The reach of the Religious Freedom Restoration Act and the Affordable Care Act will both be tested by the Supreme Court’s decision in the case brought by craft store chain Hobby Lobby. The decision is expected Monday, June 30, and many say it’s the most important religion case in years. Hobby Lobby is owned by a devout Christian family. Its president, Steven Green, has said the mandate that corporations provide insurance for contraceptives such as the morning after pill is like requiring the family to “be part of taking life.” The justices have heard the arguments and now must determine whether there is a reasonable balance that can be struck between religious employers and the new health care law.