FRED DE SAM LAZARO, correspondent: It’s not unusual to see two, three, even four newborns crammed into the same crib at this busy hospital in Hanoi. They’re the luckier ones. For those with lungs infected or not fully developed because they were premature, the struggle—quite literally for air—is that much harder. Still, the prognosis for such fragile infants is far better today than it was about a decade ago, says the unit’s supervising doctor Ngoc Diep Pham.

NGOC DIEP PHAM: Before 2000, the mortality rate of the neonatal intensive care unit was fifteen percent. Last year it was less than two percent.

DE SAM LAZARO: Antibiotics have helped as has staff training but a big reason she says is that in recent years they’ve been able to install reliable locally made equipment to help babies breathe called continuous positive airway pressure, or CPAP. 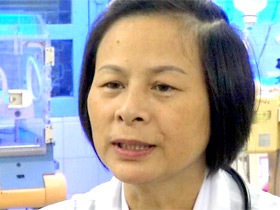 PHAM: Normally CPAP machines from America would cost us a lot of money, 2,500 dollars.

DE SAM LAZARO: Not only did they have to rely on imported equipment—bought or donated—but it also broke down. Right outside the neonatal intensive care unit of this Hanoi hospital, is some sophisticated equipment that lies unused and discarded. It’s imported, its high tech and sophisticated but its completely unsuited for settings in which the electricity may not be reliably available and where spare parts aren’t available.

PHAM: For the amount that it costs to buy one machine from America we can buy two, maybe three CPAP machines that are made here.

DE SAM LAZARO: The cheaper, more usable machines are now made in Vietnam, tailored to local conditions. Unlike in the west, hospitals here don’t have oxygen or compressed air piped in, for example, so these machines have a portable pump.

NGA TRANG (to Fred): This is an aquarium pump.

TRANG: Yes. This is the diaphragm...it has rubber inside, no oil, so the air is very clean.

DE SAM LAZARO: Nga Trang says the filter was added for especially dusty conditions. Trang and her husband started this company called MTTS with a few engineer friends eleven years ago. Their big break came with a partnership with the California-based East Meets West Foundation, which invests in so called appropriate technology. Spokeswoman Allison Zimmerman says this machine was a promising idea because it was home grown. 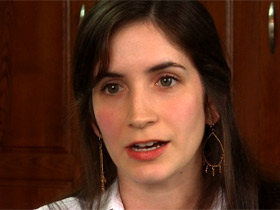 ALLISON ZIMMERMAN (East Meets West Foundation): What needed to happen was an engineering company that was willing to work with hospitals, with doctors and nurses to identify what they needed, as opposed to developing a solution outside, whether it’s in a Western country or whether it’s in a lab somewhere. It took a special type of company that’s willing to create a medical device that is affordable and that doesn’t require consumables and consumables are very expensive.

DE SAM LAZARO: The big consumable for CPAP machines is tubing—discarded after each patient in the west. Here tubes are disinfected and reused here for as long as a year—for savings in the thousands of dollars. That lower price point has brought the equipment into smaller rural hospitals like this one. Dr. Ngo Minh Chuong says his neonatal unit can now save babies like this one as tiny as 1.6 pounds.

DE SAM LAZARO (to Ngo Minh Chuong): What would happen before you had this equipment here, would that baby not have survived?

NGO MINH CHUONG: We would have to transfer to a higher-level hospital in 100 percent of these cases.

DE SAM LAZARO: That meant a two-hour road journey to Hanoi. It was unaffordable for many families in this impoverished region who had to foot the bill And, to an already overcrowded Hanoi hospital—if they got there at all.

CHUONG: If the road is bumpy it can cause the baby to choke. Or if the ambulance is stuck in a traffic jam it can also lengthen the transfer time, which can also lead to death.

DE SAM LAZARO: Here too, the mortality rate has come down—by two thirds since 2009. Life for doctors and patients is far better. Ten-month-old Bao Nam is as healthy as he is fidgety in his mother’s arms—it’s hard to imagine he weighed less than two pounds at birth. 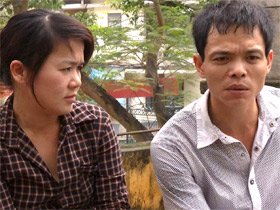 MOTHER: I was very anxious.

FATHER: Like anyone else whose baby is not well, we were very worried. At one point I thought I was going to break down. For the first week we couldn’t see the baby at all.

DE SAM LAZARO: In addition to CPAP, the joint enterprise also makes infant warmers and a portable phototherapy device explained here in training sessions by the partnership’s medical director Dr. Chien. About sixty percent of all babies are born with jaundice, which can lead to severe brain damage. It’s now easily treated with ultraviolet light; in the past babies were exposed to the sun—something that frequently had its own complications, like sunburn. The Vietnam-made so called Firefly not only provides phototherapy indoors but by the mother’s bedside.

ALLISON ZIMMERMAN: It’s great if you can keep them with their mother and their mother can breast feed, the mother can do kangaroo care when the baby’s not in the phototherapy machine, so it’s designed, so it’s small for that reason. When you have lots of babies lined up in a crib with a phototherapy over it, then that increases risk of infection. By putting just one baby in the Firefly, it decreases risk of infection.

DE SAM LAZARO: A third party in the venture is the private charity Design That Matters, which also focuses on appropriate technology. In this Hanoi lab, engineers like Mathew Blyde are tweaking the circuit boards of the infant warming device.

MATHEW BLYDE (Design That Matters): We’re just trying to improve the reliability a little bit so we’ve added some extra circuitry to make it more well protected, particularly in environments where the electricity supply might not be so reliable or might have spikes and dips.

DE SAM LAZARO (to Blyde): You want it to be able to withstand spikes in electric power?

DE SAM LAZARO: Besides working to improve their reliability, the partners' big goal is to make this enterprise financially sustainable. The devices are now being exported to neighboring countries in Asia, with plans to expand to West Africa and they hope, Europe, which could significantly boost revenues, which they say will be ploughed back into expanding into poor countries.

For Religion and Ethics NewsWeekly, this is Fred De Sam Lazaro in Hanoi.

For years, there was little hope for sustaining the lives of premature infants in Vietnam, due to the lack of technology suited for rural and remote villages. Solutions from the West were ineffective and remained unused by hospitals and nurses. Now, engineers native to the country have come together to build breathing machines and other devices that are designed specifically for their needs. A partnership with the California-based East Meets West Foundation is helping turn the tide in the infant mortality rate.