LUCKY SEVERSON, correspondent: It is not easy catching up with Father Michael Lapsley. The Anglican priest is constantly traveling round the globe searching out people with traumatized memories, especially veterans. Here he is at the Franciscan Renewal Center in Scottsdale, Arizona, to conduct what he calls a “Healing of Memories” workshop.

FATHER MICHAEL LAPSLEY: The greatest passport I have personally to work across the world is what I’ve lost. When people see me, they know I’ve suffered loss, and even though their loss may be very different, they’re still able to identify. So ironically the hands that I’ve lost become a major asset in doing this kind of work.

SEVERSON: He grew up in New Zealand, was sent as a young priest in the 1970s to South Africa long before the system that institutionalized racial segregation—apartheid—was abolished. 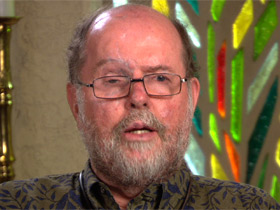 FATHER LAPSLEY: Apartheid traumatized me, it damaged me, it messed me up. I stopped being a human being and became a white man, because suddenly every single aspect of my life was decided by the color of my skin.

SEVERSON: He says he acquired “a faith problem.”

FATHER LAPSLEY: The system of apartheid was carried out in the name of the Gospel of Christ, and yet it was the very opposite of the faith I’d learned at my mother’s knee in childhood in my church.

SEVERSON: Lapsley became so public in his outrage that the white supremacy government kicked him out of South Africa. He became a chaplain to the armed wing of Nelson Mandela’s African National Congress, a move that secured his name on the white regime’s security forces’ hit list.

FATHER LAPSLEY: I began to look at scripture from the point of view of an oppressed people. I began to look again at the words of Jesus when He describes his own mission to preach good news to the poor, liberty to the captives.

SEVERSON: It was not a message the South African government could abide by. One day, while living in Zimbabwe, Lapsley opened what turned out to be a package bomb.

FATHER LAPSLEY: I had looked death in the face. I’d survived an assassination attempt. In the aftermath of the bomb I had a sense that God was with me. And of course in the first four months after the bombing, I was as helpless as a newborn baby. I could do nothing for myself. I still have no hands. I still only have one eye; my ear drums are still damaged. I’ll always need someone to assist me for the rest of my life. 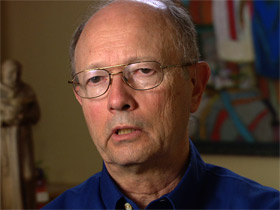 MIKE WOLD: He had a choice to make, and after he was bombed, am I going to go to a kind of bucolic little parish out in Australia, or am I going to jump right back into this furor and see what I can do? And it takes character to do that.

SEVERSON: Mike Wold was in the Navy during the Vietnam War. Now he travels around the U.S. helping Father Lapsley set up his Healing Memories workshops. He says Lapsley needs helping hands.

WOLD: It took a big toll. It wasn’t just the hands, the eye again. It was physical, you know. He needs more rest. This is a difficult thing for him to travel around the world and do this.

SEVERSON: We were not allowed to attend any of the workshops. Privacy and confidentiality are of almost sacred importance. Those allowed inside must share their own story and listen to the others, like Bob Phillips. He was a combat engineer in Vietnam and talks about his first encounter with Father Lapsley.

SEVERSON: Phillips says he has been lonely and tormented as long as he can remember. He suffers from anxiety, depression, and what he calls “re-experiencing flashbacks.” He’s been treated for PTSD. 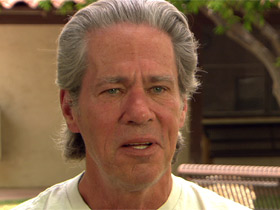 SEVERSON: Bob Phillips came to the workshop out of curiosity.

PHILLIPS: I thought, anybody who suffered what he suffered and he can be out there doing this, he’s got something to teach me.

WOLD: Everyone does what we call a life map, because many times the hurt isn’t just from the combat experiences, it’s after and before.

REV. MARGARET FELL: My first workshop was one of the most powerful and life-changing experiences of my life.

SEVERSON: Margaret Fell is an Episcopal priest who now helps out Father Lapsley in the workshops along with Sheila Laughton, an Air Force veteran. Fell is not a veteran, but she’s been dealing with her own hurt.

REV. FELL: My father died first at 58 of a heart attack, and my mother had a very difficult time with it and committed suicide three years later, and it had initially a devastating effect on the family.

FATHER LAPSLEY: What’s been surprising to some people in our work with veterans, that often the major trauma—not always, but often—is not war. It’s, in fact, things that happened in early childhood.

SEVERSON: But it was war that traumatized David Campbell, the Gulf War of 1991. His hell began after he and his squad leader dropped grenades down an Iraqi bunker. Campbell was caught by the blast.

DAVID CAMPBELL: He looked back, and I was laying face down, and he rolled me over. I just had blood all over my face, no heart-beat, no breath, no pulse, no nothing. 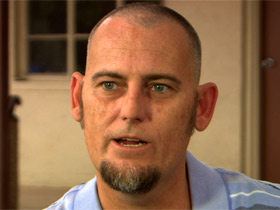 SEVERSON: Campbell survived, only to get into a terrible car accident back in the States. And because of some apparent exposure to mustard gas in Iraq, his doctors say, his bones can’t heal.

(to David Campbell): You’re going to lose your leg?

CAMPBELL: Right. All my joints are dying, so there’s nothing we can do to save them at this point.

SEVERSON: He hasn’t been able to sleep with his wife at night because of his screaming and cussing, trapped in his nightmares. The workshop, he says, helps.

CAMPBELL: First and foremost it gives me the feeling of not being alone. I’m not the only one out there suffering. It’s not just me, that I have these problems that I’ve got to deal with alone.

FATHER LAPSLEY: People become connected by the commonality of their pain, and I would say that pain is transcended.

CAMPBELL: Father Lapsley completely understands. Just because he wasn’t holding a rifle and being shot at doesn’t mean he wasn’t in combat in his own way. He was in his own combat, and so that is a war that we all understand.

PHILLIPS: We told a few stories back and forth, and we knew that you knew kind of thing. And it doesn’t take much to pass the secret word back, the “secret handshake.” I don’t know the secret handshake, but I know when I’ve just gotten one.

SEVERSON: Lapsley conducts workshops with veterans from wars around the world, places like Africa, Sri Lanka, and Iraq and Afghanistan. He says there’s a lot of need for healing in the U.S.

FATHER LAPSLEY: If you’re part of a country like the United States that goes endlessly to war, that is going to impact upon you, and the chances are you will have people within your immediate or extended family who have been damaged by war.

SEVERSON: At the end of the workshops they hold a ritual burning of their notes, of the memories that have been burdening them. Not that they will be gone, but maybe a little easier to live with.

Father Michael Lapsley is an Anglican priest who was sent to South Africa during the institutionalized racial segregation of apartheid. He became a chaplain to Nelson Mandela’s African National Congress and a target of the white supremacy government. One day Lapsley opened a package that turned out to be a bomb. He lost both hands and one eye in the attack on his life, but his faith survived. He now uses his wounds to connect with those who have experienced trauma and help them find healing.

Pilgrimage of Remembrance and Healing