JUDY VALENTE, correspondent: She’s been called a “prairie mystic.” The well-known spirituality writer Parker Palmer has said her songs are “attuned to the still small voice of the soul.” Others have described her as “a soaring songstress” and a “minister of the wide-eyed gospel of hope.”

With her 14 albums and numerous world tours, Carrie Newcomer has carved out a unique niche as a folksinger who is also an international emissary for peace and tireless advocate for living a more contemplative life.

CARRIE NEWCOMER: I would have to say that my most profound and consistent spiritual practice is songwriting—that idea of sacramental living, of seeing the world as sacrament, seeing life as a sacrament of compassion and forgiveness. 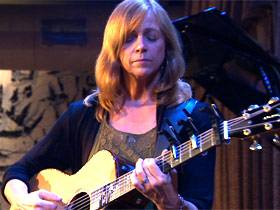 VALENTE: Newcomer’s music is hard to categorize. But her lyrics, which often emphasize the sacred in the ordinary and social justice, are rooted in her Quaker faith. She grew up in small-town Elkhart Indiana, the daughter of an Italian Catholic mother and a father of Amish ancestry who attended a Methodist church. On a mission trip to Costa Rica during college, she visited a small Quaker community.

NEWCOMER: I went to my first silent Quaker meeting in the middle of the rain forest, and there was something in that experience that my heart just said, “Ah, yes!” Something in the silence.

VALENTE: She dispensed with her plan to become a visual artist and focused on music, writing songs that capture the beauty and simplicity of daily life.

NEWCOMER: People will often ask me, you know, you make your life in sound, you’re a musician and a songwriter, and you go to a silent Quaker meeting. And it makes all the sense in the world to me. Some of my best language has come out of the silence, when I’ve taken the time to listen to my heart, to listen to something beyond myself.

I do use spiritual language sometimes in my work, but I do it very carefully. In a lot of, let’s say, contemporary Christian music, you get eight crayons to paint with. That’s all you get. But I’m kind of like a 48-crayon kind of gal theologically. 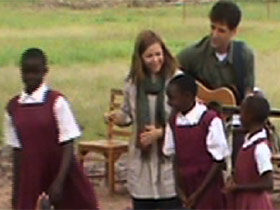 VALENTE: She says the Quaker expression “let your life speak” spurred her to look beyond the performance stage to a life of social activism.

In 2012, she performed in Kenya to raise international awareness of the need for additional schools, hospitals, and clinics in that country. Twice in recent years she toured India as a cultural ambassador for the American Embassy in Delhi. Her visits led to a musical collaboration with Amjad Ali Khan and his sons, three masters of the traditional Indian string instrument known as the sarod.

NEWCOMER: It’s not the first thing you think of putting together: Indiana folksinger, Indian classical sarod. Yes, that will work.

One of the songs on the collection is called “Everything is Everywhere,” and the song started with an email I sent to a friend. India is a very intense place. Everything seemed to be coming at me at once. So I started writing, just basically typing out images—people’s faces, smells, food, the look of the ocean, the scarves, the women, and all the beautiful colors. I ended the email with “everything is everywhere,” and that started the song.

VALENTE: She and her fellow musicians donated the proceeds from her album “Everything Is Everywhere” to the Interfaith Hunger Initiative, an Indianapolis-based group that seeks to feed the hungry in both that city and in Africa. 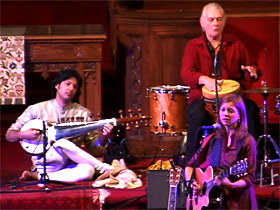 NEWCOMER: There were, you know, a variety of reasons that I went to India and Africa and later the Middle East. Part of the results, I think, of those experiences was this affirmation of this connectedness that I sense between people. I’m so powerfully moved by the thread that pulls between us, the things we recognize everywhere.

VALENTE: Instead of moving to either coast, Newcomer chose to remain rooted in her native Indiana, and that, she says, has made all the difference in her music.

VALENTE: She often explores the connection between creativity and the spiritual life in presentations and workshops. Here, she addresses a conference of women in ministry.

“My friend Faith she teaches at Candler school of theology in Atlanta. She plays a song and asks them if it’s a religious song, and then she lets them fight … which just makes my little Quakerly heart happy.”

VALENTE: Newcomer says one of her greatest achievements is writing a song that has become an anthem for social justice activists. She wrote it after listening to an interview about the importance of folk music to the American civil rights movement.

NEWCOMER: So it’s done in call and response: “Let our hearts not be hardened to those living on the margin. There is room at the table for everyone.”

VALENTE: Newcomer has several new projects. She’s just published a collection of poems and essays, her first, called “A Permeable Life.” A play based on one of her songs is scheduled for production next year at Indiana’s Purdue University. She says if she’s learned anything on her goodwill tours, it is that kindness will save the world. Not necessarily grand gestures, but simple small acts of compassion that she says are like the country cousin who sings in the kitchen and does the dishes before she’s even asked.

Singer-songwriter Carrie Newcomer’s music is rooted in her Quaker faith, and it often emphasizes the sacred in the ordinary. “Some of my best language has come out of the silence” of Quaker meetings, she says, “when I’ve taken the time to listen to something beyond myself.” Her songs as well as her social activism try to fulfill the old Quaker saying to “let your life speak.”

Poetry and the American Religion