KIM LAWTON, correspondent: At the Islamic Center of Greater Miami, Wilfredo Amr Ruiz and his fellow Muslims are breaking their daily Ramadan fast with water, dates, mangoes and other fruit. Ruiz was born in Puerto Rico and raised a Catholic. But he says in 2002, after the birth of his twins, he began searching for a new spiritual path. The following year, he converted to Islam.

WILFREDO AMR RUIZ: What attracted me the most was the simplicity of its theology. Islam is very simple. God is the creator, that’s it.

LAWTON: Today, Ruiz is an attorney with the Council on American-Islamic Relations in Miami. And he’s part of one of the fastest growing segments of Islam in the US: Latino Muslims. More and more Hispanics are embracing Islam, in part, Ruiz says, because they find a cultural familiarity that stretches back centuries, to the Moors in Spain. 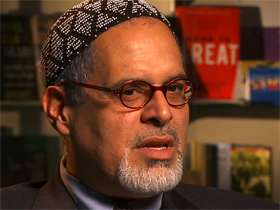 RUIZ: Latinos soon reconnect with a hidden past. They say, “Islam is not really that foreign to us. Islam is us. It’s part of us.” Four thousand words from Spanish come from Arabic: Camisa, pantalón, tomate, ensalada.

LAWTON: Scholars estimate there may be as many as 250,000 Latino Muslims in the US. According to one major study, between the years 2000 and 2011, the percentage of those attending US mosques who were Hispanic jumped from 6 percent to 12 percent. And experts say the numbers are much higher today.

RORAIMA AISHA KANAR: After going to, Catholic school for 12 years, my faith needed a little bit more depth in it, and I was able to find it in Islam.

LAWTON: Most Latino converts come out of Christianity, especially Catholicism.

NUSAIBA GUERRERO-MACIAS: The Trinity was very confusing to me. I didn’t understand how God was a man or how man could become a god.

NADIA ECHEVRRIA: I just felt that the minute I put my head down to the ground, I felt like I was really talking to God.

LAWTON: Ruiz says many Latinos like that in Islam, there are no intermediaries with God, such as priests. 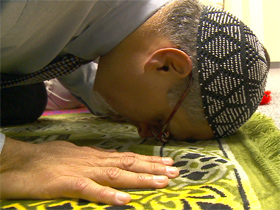 RUIZ: You don’t need of another human being really to fully practice Islam. Even if you’re alone in an island, your religion will be complete, if you’re Muslim.

LAWTON: Hispanic Muslim converts can face a host of challenges, not least of which is the reactions from family and friends. Ruiz’s mother didn’t speak to him for months.

RUIZ: She was hurt probably. Why? Because she was the one that moved us to be in a Catholic school, be raised as Catholics, she herself was such a devout Catholic that probably she felt like…hurt, ‘Look, I did everything for my son to be a Catholic, good Catholic boy, and now he turns to be a Muslim.’

LAWTON: Ruiz’s wife Edimar Capella grew up in a Puerto Rican Presbyterian family. Her family has been more accepting.

EDIMAR CAPELLA: I joke with my mom and I tell her that ‘you raised me as a Muslim, you just didn’t know it.’ Because a lot of the values, most of them, I learned at home. And for them it was like my pathway. That’s her pathway, let her follow it.

LAWTON: Some Latinos have difficulty adapting to Islamic standards such as no pork-products or alcohol.

RUIZ: In Latino culture it’s: ‘a party without alcohol? What do you do?’ I have people asking me, “what do you do in a party if there’s no alcohol?” 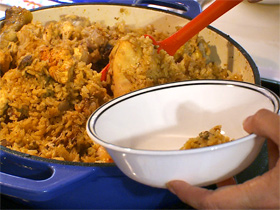 CAPELLA: A lot of our recipes I had to work around and find a way of keep the taste, keep the flavors, but still- I wanted them to taste like Puerto Rican food, like Caribbean food, but without the pork and it was a challenge. And I think I was pretty successful.

LAWTON: A more serious challenge for Latino converts can be countering misperceptions about Muslims.

RUIZ: I believe the challenge of adding another element of discrimination, like if we don’t have enough, right?

LAWTON: Ruiz says it can be a struggle trying to differentiate themselves from images of Islamic extremists often portrayed in the media.

LAWTON: There also can be challenges from within the Muslim community.

RUIZ: Even though most of the Muslims do see the Latinos very welcoming, when it comes to Latinos now taking leadership position in their community, they are facing more challenges, right? Because they say, ‘how can you be a leader or be an imam? Your mother tongue is not Arabic, how much Arabic do you know, or how much you know of the Muslim culture?’ 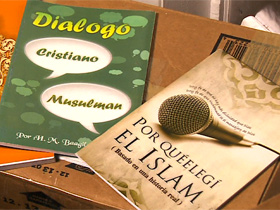 SOFIAN ZAKKOUT, AMANA: I have a guy from Ecuador- I give him Quran, and he was very happy. “I’ve been looking for it for two years.” And I have a guy, Cuban. I give him Quran, he start to dance in the street. Free Quran. Because they hear about the Quran, but they never seen it because it’s not easy to find it. But we find it, we have it.

LAWTON: On the wall of AMANA’s Miami office, Zakkout keeps a sampling of conversion certificates with Latino names.

ZAKKOUT: If I want to put all the certificates, a copy of all certificates, we need all the rooms and all the walls to cover it because we really have a lot!

LAWTON: At recent national conventions, the Islamic Circle of North America has been holding special session in Spanish for converts.

NAHELA MORALES, ICNA: Many of them don’t speak English, so it’s very important for them to go to these conventions and acquire the knowledge just as any other Muslim. 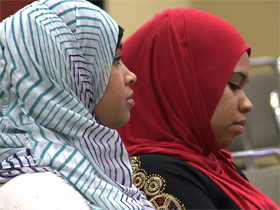 LAWTON: Nahela Morales coordinates Hispanic outreach for ICNA’s Why Islam project. She attends the North Hudson Islamic Center in New Jersey, where about 30 percent of the congregation is Latino. During the World Cup Games, she led a team to Brazil where they passed out literature and talked to people about their faith.

ICNA says more than 50 percent of the Latino converts they see are women. Many choose to wear a head covering, or hijab.

KANAR: It reminds you of who you are and what values you have and, and I don’t see that as oppression. I see that as a favor to me to be able to do the right thing all the time.

LAWTON: Roraima Aisha Kanar emigrated from Cuba when she was five years old and converted to Islam when she was 23.

KANAR: My father, when we came from Cuba, taught me to love this country for opening their arms to us and at this time, as a Muslim, I’m still cherishing it because I am free to be a Muslim.

LAWTON: Ruiz, who served as a Navy chaplain, says Latino Muslims bring much to the American Muslim community.

RUIZ: You can keep your own cultural expressions and be equally American, right?

LAWTON: Latinos, he says, can also teach the largely immigrant Muslim community about political organizing and standing up for their rights. And he says because they face so many questions, Latino coverts tend to be better educated about Islam than many from predominantly Islamic societies.

RUIZ: I need to learn, not to a level to satisfy only my curiosity but my family’s curiosity as well, right? And I better be ready to answer their questions because otherwise I might not look good saying, “Hey, how you embrace a religion and you don’t know this about your religion?

LAWTON: At the end of the day, Ruiz believes any challenges Latino Muslims face diminish with the joy he says they find in Islam.

RUIZ: Islam, what brings to most of the people is peace. People feel at peace first with themselves, of who they are and their way they have chosen, and a peace knowing what is… what is the purpose of life?

LAWTON: And that’s something they want to spread throughout the Hispanic world. I’m Kim Lawton in Miami.

We visit the Islamic Center of Greater Miami to look at the rising number of Latino Muslims in the US—as many as 250,000, according to estimates. Some of the converts say that in Islam they have found theological simplicity and “no intermediaries with God.” The Islamic Circle of North America reports that more than half of US Latino converts are women. “I just felt that the minute I put my head down to the ground, “ says Nadia Echevrria, “I was really talking to God.”

Day of the Dead