SEVERSON: In the Shenandoah Valley of Virginia, Chris “Comes With Clouds” White, who is of Cherokee descent, and Jack Hranicky, a retired archaeologist, have found something which could turn out to be monumental. Evidence of a pre-historic Native population in North America. Evidence that, for Chris, has a strong spiritual meaning.

CHRIS WHITE: I think it happened for a reason that we found it. When I was building the house, I’d take a break, from working up there, come down and sit by the creek … and a small still voice came to me and said, “the land is important.” And I’ve always kept that in my mind and now I know why.

SEVERSON: What Chris found were stone circles, which are difficult to see at first. Archeologist Hranicky says when the stones were originally put in place, this area was all grassland. 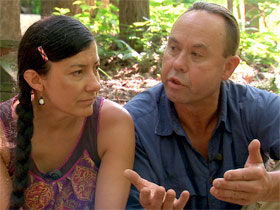 SEVERSON: Chris, and his wife Rene "White Feather," both believe that the circles they see on their property reflect an important connection that’s basic to their spiritual tradition.

RENE WHITE: There’s a circle, but there’s always a center to every circle. And at that moment what I was thinking about was that we believe creator God is in the center.

SEVERSON: Ever since the discovery, Hranicky has been convinced this is a very, very old - and very significant - site.

HRANICKY: When we start studying these and mapping these various features, we discovered, hey, these are not random. The humans stacked these rocks in this place. Mother Nature didn’t create them.

SEVERSON: Hranicky sent a small section of jasper, a quartz-like stone, that appeared to have been burned in a fire, to a lab for ‘luminescence dating’ - which is considered by many to be the most reliable form of dating. The lab result seemed to confirm his suspicion. The piece of jasper was 10,470 years old, making it thousands of years older than any other find in North America.

HRANICKY: I published back in the ‘70s that people were in Virginia 25,000 years ago and can you believe my colleagues said, “Oh, Jack, you’ve been tipping the bottle again.” It’s taken me fifty years to get to this spot.

SEVERSON: Dr. Ed Krupp is the director and curator of the Griffith Observatory in Los Angeles.

DR. ED KRUPP (Griffith Observatory): Am I surprised that some kind of structured monument is that old in North America? I would say, “yeah, I am,” because I don’t know anything else that is that old. 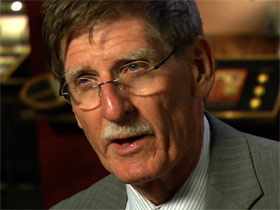 SEVERSON: Astronomer Krupp is considered an expert in ‘Archaeo-astronomy’ - and has visited over two thousand ancient and prehistoric sites worldwide. He says if the Shenandoah site checks out, it would be important.

KRUPP: We’re actually beholden to all of these ancestors, all around the planet. They are the people that helped make our world the way it is for us today, whether we’re in China, North America, Europe or whatever.

SEVERSON: Rene ‘White Feather’ is from the Lumbee tribe of North Carolina.

RENE WHITE: We’re reluctant sometimes to say, “we are owners, we own a Paleo-Indian site.” We don’t want to say that because we feel like it’s something we’re custodians of.

CHRIS WHITE: Us all being related by virtue of being created and respecting that - that represents a circle. The circle of life - that we’re born … we have a youth, we get old, we die … but we believe that there’s something beyond that where our ancestors are, so that’s a circle.

SEVERSON: Stone circles in pre-historic sites have been discovered right across the globe - in West Africa – Egypt – Ireland, in fact throughout the British Isles there are hundreds of stone circles. And then of course there is Stonehenge, the granddaddy of them all, which was built around 3,000 B.C. And like all these pre-historic sites … who put them there, and why, we don’t really know.

DR. ED KRUPP: I don’t think you’re ever going to have a confident sense of certainty about the prehistoric past and, and prehistoric monuments for the obvious reason, we don’t have the owner’s manual. 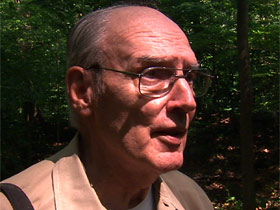 SEVERSON: Hranicky says from this rock, it’s possible to see the summer and winter solstices marked out clearly - and both the spring and fall equinox.

JACK HRANICKY: When we first discovered this, it didn’t take long til I knew the sun was coming up over that part. I knew the equinox is there. I’d already measured this site as an absolute East-West orientation.

SEVERSON: It's difficult to imagine that this Virginia site was created by nature. Also difficult to understand how humans could stack these boulders in place. The stones sitting on top appear to have been crafted by human hands. The bottom boulder alone would weigh as much as two thousand pounds.

CHRIS WHITE: If you look right here you’ll notice that this is shimmed to make it level. This bottom rock is milled flat. It’s not natural. It’s milled flat. And to get this level, to get the elevation they wanted they had to shim it, which is amazing.

JACK HRANICKY: Somebody had it in his head the technology, the astronomical physics of this planet to be able to come out here and say, “Okay, let’s move these things around so this does this particular thing. I want to make a clock out of this.”

CHRIS WHITE: So at noon every day, doesn’t matter if it’s summer, spring, winter, this channel will illuminate at noon. It looks like we have a couple minutes to go. It starts to illuminate, you know, ten minutes, twelve minutes before, then as the sun passes this way it’s in that channel.

SEVERSON: And lo and behold, ten or twelve minutes later, the sun passes through the channel. The connection that this could represent, between ancient peoples and the universe they observed around them, strikes a spiritual chord with Rene White.

RENE WHITE: When people come here they feel an incredible positive energy here when they come. They feel good vibrations.

KRUPP: Each group of people is culturally very distinctive. They’re gonna do things their way, for their reasons, but the broad picture behind this is an attempt to integrate human behavior to the cosmos, the greater cosmos. That’s really what sacred space is. That’s why we get geometry and astronomical alignment built into it.

SEVERSON: Chris ‘Comes with Clouds’ and Rene ‘White Feather’ have expressed their deepening spirituality by starting a church that meets periodically under the trees, by the stones. Anyone can attend. The Whites feel an obligation to share what they consider to be a sacred site. Archaeologist Jack Hranicky plans to share his findings with his professional colleagues for peer review in the upcoming months.

Chris “Comes with Clouds” White, of Cherokee descent, discovered a pre-historic stone circle near his home that carries a significant spiritual meaning for him. “We’re born, we have a youth, we get old, we die, but we believe that there’s something beyond that where our ancestors are, so that’s a circle.”