BOB ABERNETHY, host: Joining me now are Kim Lawton, managing editor of this program, and Haris Tarin, the director of the Washington office of the Muslim Public Affairs Council. Haris, welcome. What is your – I know you have some concerns about the president’s policy. What is your biggest concern?

HARIS TARIN (Muslim Public Affairs Council): The biggest concern is that it not only be a military response in approach to ISIS. It has to be a social, an economic, education-based response. There are 6.1 million internally-displaced Syrian refugees in Jordan, in various countries around the region. And 50 percent of them are children. These individuals are ripe for being brainwashed by ISIS and Al Qaeda, and we must respond to threats like that as well. 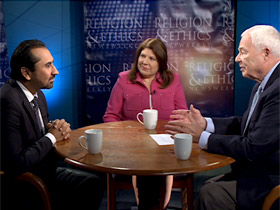 TARIN: Well, I think we have to work with our Middle Eastern partners. But I think America has to take leadership on this issue because we have the ability to really bring people together in the region. A lot of time the various countries in the region have different agendas, or they can’t come together and really find an [overarching] goal to address ISIS. And so our leadership is critical, and I think that one thing that the president said which was important was we will work with other countries in the region.

ABERNETHY: Well, if they come forward and want to work with us.

TARIN: I hope so. I hope that they’re taking this threat seriously because it is a real threat to the people of the region.

KIM LAWTON, managing editor: What about from the religious perspective? What’s the responsibility, the role for U.S. Muslims in this in a non-governmental way? 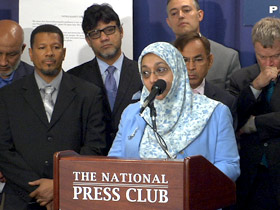 TARIN: What I think U.S. Muslims are doing, their feeling is that ISIS again has hijacked their faith. We saw this on 9-11, we saw this repeatedly with Al Qaeda. ISIS is again using religion to put forth political and social goals in the region. And I think American Muslims are coming out in staggering numbers. The leadership across the country has come out saying, “This does not represent us. This is not who we are.

And we will stand against you using our faith to push a political agenda in the region.”

TARIN: Yes. Communities around the country are making sure that the Internet is not a place where young people are being influenced. Because the message of ISIS is black and white. It says the West and America is at war with Islam. And so what our communities are doing, our institution has launched a program called Safe Spaces, where we are making sure that our young people are civically engaged and are not vulnerable to the black and white message of ISIS and groups like it.

ABERNETHY: Do you think that this new policy of the United States can work? Can it really be carried out, or is there a danger that it really will inspire a lot of Muslims to think that this is the West against Islam, and not participate?

TARIN: That’s why, Bob, I mentioned that there cannot be a military response only. If it is a military response, it can potentially make things worse on the ground, because ISIS unfortunately runs or rules a land the size of Maryland. And what we have to do is make sure that we approach this in a comprehensive manner: socially, economically and with partners on the ground.

ABERNETHY: Our time is up, I’m sorry. Many thanks to you, Haris and Kim.

As the nation marks the anniversary of the 9/11 attacks and President Obama outlines his strategy to defeat Islamic State militants, ISIS, American Muslim groups this week joined together to reaffirm their condemnation of violent extremism waged in the name of religion. Washington office director of the Muslim Public Affairs Council discusses the US response to ISIS and the efforts of American Muslims to respond to potential future threats.