KIM LAWTON, correspondent: It’s the tallest church in America, and in many ways, the Riverside Church in Manhattan was the country’s original Protestant megachurch. The soaring neo-Gothic cathedral was built in 1927 by industrialist John D. Rockefeller Jr. Over the decades, the interdenominational congregation has hosted many prominent preachers, people like Harry Emerson Fosdick, Martin Luther King Jr., William Sloane Coffin, and James Forbes.

DIANA BUTLER BASS (Author and Scholar): The people who have stood in that pulpit reads like a who’s who of twentieth-century world Protestantism. 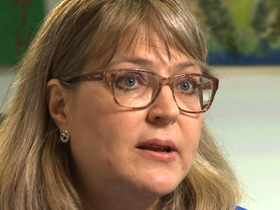 BASS: To simply have her name and that pulpit put together in the same sentence says this is an important leader.

LAWTON: In 2014, three of the nation’s most influential mainline Protestant congregations called female senior pastors for the first time: Rev. Shannon Johnson Kershner at Chicago’s Fourth Presbyterian Church; Rev. Ginger Gaines-Cirelli at Foundry United Methodist Church in Washington, D.C., and Butler at Riverside, which is affiliated with the United Church of Christ and the American Baptist Churches USA.

BASS: It is hard to imagine as recently as even twenty years ago that these historically important churches would have wound up hiring women, much less sort of three women coalescing at the same time.

LAWTON: Butler grew up in Hawaii, the eldest of five children.

BUTLER: I felt the call to ministry very early. I grew up in a home of very devout parents, and I felt a calling to be part of the church. I loved it. But I never saw a woman in leadership.

LAWTON: She attended Baylor University, where she took some theology classes and then decided to go on to seminary. 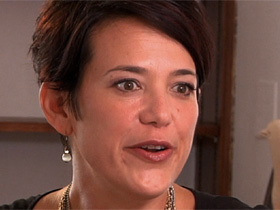 BUTLER: When I graduated from seminary I couldn’t find a job at a church. And so I took a job running a homeless shelter for eight years in the city of New Orleans, and that’s where I say, I always say I learned how to be a pastor there.

LAWTON: Butler eventually did get an assistant pastor job in New Orleans, and then in 2003, she was called to be senior pastor at Calvary Baptist Church in Washington, where she was for the last decade. She says her style as a pastor is collaborative rather than authoritarian.

LAWTON: Butler says she wants to develop a church setting where she and her congregation members can wrestle together with difficult questions.

BUTLER: What does the Bible mean in our day and age? Does it mean anything? Or does God exist? Questions like that that people are wondering. And then to get to a personal level: I am in pain, my child is sick, where is God in all of this? I need to ask those questions, and I need to have a safe place where I can just say I don’t know the answers.

LAWTON: She’s open about her own struggles, including a painful divorce and the challenges of being a single mother to three children, ages 20, 17, and 16.

BUTLER: I want to be in a community of people who see me as a real person who is asking these questions, who is living through points of pain and fear and questioning just like they are. 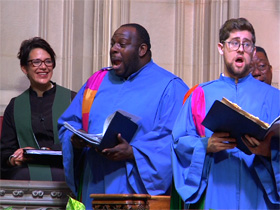 LAWTON: According to Duke University’s new National Congregations Study, only eleven percent of American congregations are led by women. Many of the nation’s largest Christian denominations hold the theological position that women should not be pastors. Even among those that do allow female ordination, many women pastors report ongoing discrimination.

LAWTON: Ironically, declining numbers in mainline denominations appear to have made new inroads for female pastors.

BASS: Because as the denominations lost prestige and men went to other careers, women who felt callings to these careers suddenly had pathways opened up that they never had before. I suspect that when history of this time is written in another fifty or one hundred years, it might look like the women actually saved these denominations.

LAWTON: Bass says, like women in many other professions, women in religious leadership are often still judged on the basis of gender. 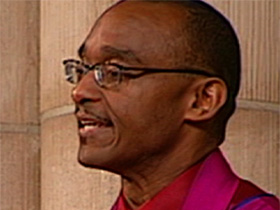 LAWTON: Butler will face scrutiny as she tackles the specific challenges at Riverside. The congregation has been without a fulltime senior pastor for the last five years. The previous senior minister, Brad Braxton, resigned in 2009, less than a year after his installation, amid internal divisions over his leadership style and compensation.

BASS: When a congregation goes through that kind of leadership crisis, it’s never pleasant, and it wears away at the fabric of the congregation.

LAWTON: Although Riverside has more than 1,600 members, those numbers are down significantly from just a few years ago. Another complication is the multicultural make-up of the congregation.

LAWTON: But perhaps the biggest challenge will be crafting a vision for the congregation in a society that is vastly different from Riverside’s glory days as the national voice of social justice.

BASS: It once was the case that all William Sloane Coffin or James Forbes or, back in the old days, Harry Emerson Fosdick had to do was simply get up and say something and the media would throng there and say, “Oh, my gosh, Fosdick says this.” But it won’t be quite that way with Amy. Religion doesn’t have that space in culture anymore, especially in a city like New York.

LAWTON: Butler says she’s hopeful about the possibilities of what Riverside can become in this new environment.

BUTLER: Probably if you and I were going to build a church from scratch today, we wouldn’t build a big cathedral like this. But here we are in the middle of this powerful city, and I want to cast a vision around which a community of people can gather and invest and change the world.

LAWTON: Despite surveys documenting rising numbers of Americans who do not want to affiliate with institutional religion, Butler says she’s not worried that this will mean the demise of churches.

LAWTON: How Riverside—and Butler—negotiate this new era could provide a model for all mainline Protestantism.

Historic Riverside Church in Manhattan has been known for the prominent voices that have occupied its pulpit, including Harry Emerson Fosdick, Martin Luther King Jr., William Sloane Coffin, and James Forbes. Now the influential mainline Protestant congregation has called a woman, the Reverend Amy Butler, to lead the congregation as its first female senior pastor.