BOB FAW, correspondent: When you are one of the world’s most acclaimed violinists, with a three-million-dollar Stradivarius and a mastery of tone and technique that is unrivaled; when world-wide performances keep you on the road more than 200 days a year and you still find time to record CDs, conduct and compose as well as mentor young, aspiring musicians, along with helping raise three sons of your own; when you are as successful as Joshua Bell, it is perhaps not surprising that this virtuoso says the music he plays, the music he makes, reveal what he calls “a sense of divine order in the world.”

JOSHUA BELL: I mean, everyone’s definition of what God means can vary. But music is something that really takes you to that----sublime is a great word. That thing that is greater than we are. The beauty, the magic of the universe. Bach, for instance, probably one of the great recruiters to religion, I would think, because it's when you listen to Johann Sebastian Bach, the music you think—you can only think that there is something, something great out there. There is no other explanation for his music. For me music has been in a sense my religion, and it is what brings me closest to God or truth or whatever you want to call it. 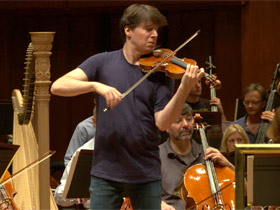 FAW: Rehearsing here with the National Symphony Orchestra at Washington’s Kennedy Center, Bell describes himself as “Jewish, in a cultural way.” But his musical identity can best be described as universal, embracing so many composers from so many eras.

(speaking to Joshua Bell): You were quoted at one point for saying a great piece of music gives one the sense of divine order.

BELL: We live in a very chaotic world that sometimes we----it just seems like a mess. One of the reasons why we listen to music and to great classical music in particular is that everything is in an order and in a place and has a beauty that you see in nature, that you see and that people look for when they look for God.

FAW: Bell performed recently for anyone who wanted to come at Washington’s Union Station. It was seven years ago at a Metro station that he famously played incognito and more than 1,000 people walked by too busy to stop for or notice the beauty.

BELL: That was not a great experience for me as far as finding the connection between the audience, it didn’t happen. It’s funny how many ministers and rabbis and even someone from the Muslim faith told me the other day that it was used as an allegory, as an example of how we should pay attention to the beauty in the world. It’s funny how it's caught on in the religious community, I have had so many people come up to me and say, oh, my pastor talked about your story in the subway this morning.

FAW: Bell says he was influenced by the separate, diverse faiths of his parents.

BELL: My father was actually was an Episcopal priest as a young man. Became a psychotherapist, a psychologist. My mother is Jewish, so I grew up in a mixed background. But the common denominator was certainly music, and that was sort of emphasized in my household as music being sort of the spiritual force. 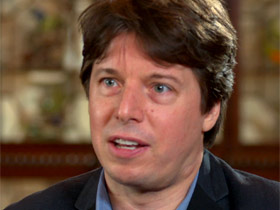 FAW: A child prodigy, Bell says he’s grateful for the support his parents gave him, particularly his Jewish mother who made sure he worked hard at his art.

BELL: A lot has to do with the work ethic as a child and having a very dominant, in my case the dominant the very stereotypical Jewish mother. But one of the stereotypes is sort of true that you need a parent to practice with your child at a young age.

FAW: Your music is—I don't want to say a kind of ministry to those who hear it but you see yourself as having a role to developing others. Why? Where did that come from?

BELL: At a certain stage in one's life to you start to think that it's time to start giving back the other direction. You're receiving all the time. I felt I was receiving from people my whole childhood. My great teachers and patrons and people that have fostered what I am doing, and so at a certain point you start to think, okay, it's time to start giving back.

HBO Master Class: So there is no question. It is absolutely 100% confidence.

FAW: To Joshua Bell, mentoring young people is very important. He’s featured here in an upcoming (October 14) HBO documentary called Joshua Bell: A Youngarts Masterclass and he often works with schools where he believes music should be a major part of the curriculum.

BELL: I think music should be the basis of an education and everything should be sort of tied into that because it really incorporates so many aspects of learning, having music in their lives it helps them learn about language, about cooperation, about beauty.

FAW: Do you have a kind of ritual or a mindset or something you say to yourself before you step on to the stage—whether it's a prayer or not? 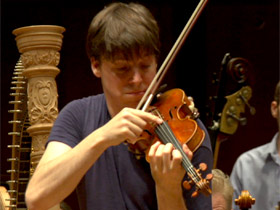 BELL: My mantra before I go on stage. I have a, it's kind of, it's a sort of a meditation, my—trying to get to peace with myself and focus myself, rid myself of negative thoughts, things that are really not important.

FAW: When you are performing are you thinking about the next phrasing? Is your mind one step ahead of where your hands are?

BELL: I’m thinking ahead and trying to master my own mind because I—things creep in, doubts creep in. Part of my responsibility is finding the truth inside that music, the sincerity, not looking for gimmicks, and looking inside myself and finding what I experience as the truth in the music.

FAW: Forty-six, no longer the wunderkind, Joshua Bell says he will never stop performing, because for him music provides endless opportunity and challenge.

BELL: It’s inevitable that physically there are things that start to decline, get a bit slower, a bit rustier. But the nice thing about music is that you can keep growing in an artistic way throughout your life.

FAW: And there’s something more, says Joshua Bell. A gift like his, he concedes, confers a solemn responsibility.

BELL: I guess there’s a certain, one senses, a certain obligation that when you’re given a gift, I guess I think of it that way. When you’re given this gift of not just the ability and the capacity but also the gift of everything around in my life. There is more to life than whether I make a mistake on stage or not. That music is about a sort of magical experience, and I also think how lucky I am to be doing this, to help bring beauty to people.

FAW: Joshua Bell, then, at the pinnacle: still reaching, still learning, and ever mindful that music like this is a pathway to something greater.

For Religion & Ethics NewsWeekly this is Bob Faw in Washington, DC.

A world-famous violinist, Joshua Bell is the son of a mother who is Jewish and a father who was an Episcopal priest. But Bell says the emphasis on great classical music in their household was “the common denominator” and “the spiritual force.”