LUCKY SEVERSON, correspondent: It’s called Opportunity Village. It's transitional housing for the homeless, and it’s unlike almost any other in the country.

ANDREW HEBEN (Co-Founder, Opportunity Village, Eugene, Oregon): They’re like cute little miniature houses, and I think it’s something that the average person can relate to.

SEVERSON: Andrew Heben is an urban planner recently out of college and author of a book about tent cities. He spearheaded the design of Opportunity Village and calls the miniature houses "bungalows."

HEBEN: While it may not be much, just having a small place to call your own is a pretty important thing no matter how small it is.

BRYANT: It’s a heck of a lot better than sleeping under a bridge.

SEVERSON: This is Pastor Dan Bryant, senior minister of the First Christian Church in Eugene, Oregon. He’s the president of the board at Opportunity Village. He also has individual shelters for the homeless on church property and a clothing bank within the church. Pastor Bryant takes helping the disadvantaged very seriously. 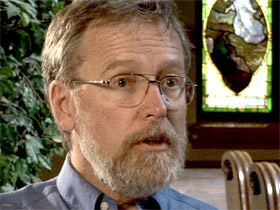 BRYANT: If we don’t in some concrete way help people to have a decent life here on earth we are not fulfilling the gospel. It’s that simple.

SEVERSON: Turns out that Eugene, population about 200,000, has a high per capita rate of unsheltered homeless.

BRYANT: Read the gospels. I mean, the largest by far topic that Jesus and the gospels, Paul addresses, are problems of the economy, of wealth and poverty. We’re tired of waiting for government to fix the problem.

SEVERSON: Pastor Bryant believes that the public should shoulder the burden to house the homeless, but that it is also a special calling for people of faith, who stepped in with contributions and labor to build the village. Conventional development of low-income housing costs on average about $200,000 per unit.  They are a little larger, of course, and they have indoor plumbing, electricity.  But all the little houses here, all thirty of them added together cost less than half of one federally funded unit, and they didn’t cost taxpayers a single dime.

SEVERSON (to Andrew Heben): Are these all the same size?

HEBEN: There's eight by eights and eight by tens.

SEVERSON (to Andrew Heben): For some people that would be the size of a walk-in-closet.

This is Laura King. She lost her job and has been living in Opportunity Village for about a year.

LAURA KING: We’ve got our own bathhouse, we’ve got our own laundry facilities. We’ve got a community gathering area. The individual units don’t have electricity or plumbing, and that’s not like living in your own apartment, but that’s okay.

HEBEN: Got to learn how to share food here so we got two fridges here, thirty people. 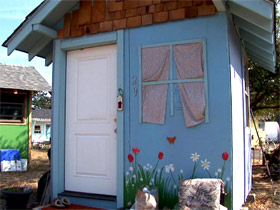 SEVERSON: The village has a community kitchen where residents can cook their own meals. It may be outdoors, but it’s spotless.

BRYANT: The cost comes down to three dollars a night per person, and one of those three dollars is paid by the villagers themselves. They all pay thirty dollars a month for their utilities, for the water, and electricity and Internet service even. So we are running this facility for two bucks a head a night.

SEVERSON: Individual units don’t have electricity, but that’s a small problem for people who have been sleeping in dark, shadowy places. People like Robin.

ROBIN: What I’ve got now is, I’ve got it hooked up, my lights hooked up. So I have lights running off of eighteen-volt batteries.

KING (speaking to villagers): Those people that think this would be a good idea, can we get a show of hands?

SEVERSON: This is another unique aspect to Opportunity Village that organizers say was influenced by the Occupy Movement.

SEVERSON: There’s an outside board of directors that includes faith leaders, but it’s the residents themselves who make the rules and enforce them. The community doesn’t take kindly to violence or too much drinking. Violators get three strikes, and then they’re out. This is Katherine. She likes that residents have a say. 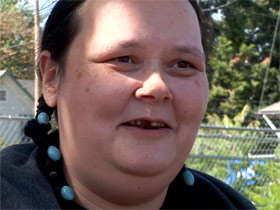 KATHERINE GRIFFITH: It gives you the chance to have a voice. You know, you don’t feel like nobody’s listening to you. You feel like you have some control over your life.

SEVERSON: Father Brent Was, of the Episcopal Church of the Resurrection, is on the village board. He also has individual shelters in his church parking lot. Father Brent tells his congregation that the message of Christ is that they should gravitate toward places of suffering, like the village.

REV. BRENT WAS (Rector, Episcopal Church of the Resurrection, Eugene, Oregon): It gives another set of lenses for us to see what God really looks like.  God is not contained within the church,  God is not all beautiful, you know, silver and brass and fine wine at a table, at a beautiful Eucharist, with an organ and all. God is alive in the world, and we need to encounter God in all the places that we encounter the world. Down at the village is another opportunity to see the face of Christ reflected back to you.

SEVERSON: There’s some well-worn faces here, but there are plenty that look like your neighbors. Tony, for instance, lost her job and then everything else. Now she’s employed as a caregiver.

TONY: It’s my own little place where I can regroup and get my paperwork ready and get ready for work, and we have showers here that we share and wash our clothes here, and I’m able to get to work and look clean and presentable.

SEVERSON: Some residents are on government disability, others have jobs.

BRYANT: Half of our villagers have income.  They could afford a place to live if there were affordable places. But there aren’t.

KING: What you’re looking at is trying to come up with first month, last month, a security deposit. It’s a chunk of change that's just insurmountable to where you feel defeated.  You feel like there’s no way you’ll ever be able to scrape together all that money all at the same time.

SEVERSON: No one gets into Opportunity Village without first checking in. It's a refuge from a world that can be very violent, even in a university town like Eugene.

GRIFFITH: And then when you get in here, it gives you a chance to take a breather and say okay, so now I’m somewhere safe, and I can start worrying about next week and next month and next year instead of what am I eating in a few hours, because I have nothing.

SEVERSON: Katherine and Ron Griffith moved in here after she lost her job and the roof fell in.

GRIFFITH: I kept saying it couldn’t get any worse, but then it kept getting worse. I tell people at the beginning of April of last year, I had a three-bedroom home and everything that goes with that.  My two adult children were living with me, and I had a mother, and we thought everything was good. By the end of May I had none of that; it was all gone by the end of May.

SEVERSON: But then things started to get better. She and Ron were married at Opportunity Village on Halloween by Pastor Bryant, who was dressed for the occasion.

GRIFFITH: We didn’t have any music or anything, so everybody hummed the Wedding March when I walked down the aisle.

SEVERSON: Now Katherine has a job, and she and Ron live in an apartment downtown.

SEVERSON: The village has been such a success the city extended its lease. The next project will be called Emerald Village. There the bungalows will be twice as big. These will be for the homeless who have a job but don’t make enough to rent or own a place of their own.

In Eugene, Oregon, local faith groups, religious leaders, and volunteers have created Opportunity Village, a community of small houses for the unsheltered homeless. Each house is no more than ten feet wide and was built with donated materials. Villagers pay just a dollar a night, and there is no cost to taxpayers.