BOB ABERNETHY, host: We want to look more closely now at some of the ethical considerations involved as the U.S. ramps up its response to the Ebola crisis. With me is our managing editor Kim Lawton, and joining us from Newton, Massachusetts is Professor George Annas, chair of the department of health law, bioethics, and human rights at the Boston University School of Public Health.

Professor, welcome. What should we be thinking about in terms of the ethical considerations as we try to deal with the Ebola situation?

KIM LAWTON, managing editor: How do you make that balance? What principles should we consider as we decide how many resources get put here and how many get sent over to West Africa? 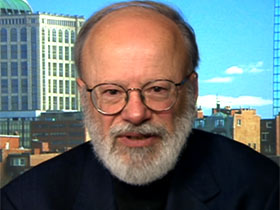 ANNAS: Well, we do have a primary obligation to our own citizens, but nonetheless, it's trivial in the United States compared to the epidemic in West Africa, and we're nowhere near anywhere where we have to allocate resources between the U.S. and West Africa. We can afford to do both quite well.

LAWTON: Here in the U.S., one of the things we're hearing as the anxiety level has heightened this week, people are talking about mandatory quarantines; they're talking about travel bans. You know, is it morally okay to restrict or violate people's civil rights in order to stop an outbreak?

ANNAS: It is morally okay to ask people, as we're doing, mostly now voluntarily, to stay home and not go in large crowds or public transportation. If they have possibly been exposed to Ebola, if they have actually been exposed to Ebola, like the nurses, for example, in Dallas, then it's perfectly reasonable to ask them not to travel around and not to expose anybody else. And obviously, if they have Ebola, then it's perfectly acceptable to isolate them to treat them. No one that I know of wants to spread Ebola; no one who has Ebola doesn't want to be treated. These are not things you have to force people to do. These are things that they'd be happy to do, if they had the proper, accurate, scientific information about how to protect themselves and others.

ABERNETHY: Are you concerned, professor, that people are getting the information they need and that hospitals have the things they need?

ANNAS: Yes, it's quite clear that they don't and are playing catch up now, both in terms of the personal protective equipment and in terms of the actual protocols and training to actually be able to use the equipment in a safe way. So, we're learning. We're on a fast learning curve. I think the hospitals are learning, but the idea that everybody was all prepared for this is fanciful.

LAWTON: And as the officials, public health and government officials, are doing this response, what ethical advice would you give them? What ethical issues should they keep in mind?

ANNAS: Well, the most important thing in any epidemic or any threatened epidemic is to maintain the trust of the public, and you can only do that by scrupulously telling the truth. If you know something, and you don't know something, admit that you don't know it, but that you're going to try to learn it. You should never say that all our hospitals are prepared, and they can all deal with Ebola, when that's not true.

ABERNETHY: Many thanks, Professor George Annas of Boston University, and Kim Lawton.

We talk with George Annas, professor of health law, bioethics, and human rights at Boston University’s School of Public Health, about ethical issues, epidemics, and the Ebola virus.