JUDY VALENTE, correspondent: Every day, Jordan Becker lifts weights at the gym, hoping to build up his biceps and chest muscles. It’s been a long journey from where Becker started, pictured in this photograph at age 4.

JORDAN BECKER: My sisters and my mom always tell me that they had to pay me to wear dresses. Now at the time I didn’t know that meant anything significant, you know, that I wanted to be a male, but looking back in hindsight, it started very young.

VALENTE: Like many transgender individuals, Becker says he felt he was born trapped inside a body that was, for him, the wrong gender.

BECKER: From a very young age, I always knew I was different. I came out as a lesbian, and it was good for a couple of years, you know. I felt like I really belonged. But then as time went on I just kind of noticed that something still felt—a part of me was missing.

VALENTE: Transgender isn’t the same as being homosexual or merely cross-dressing. It’s a far more complex phenomenon known clinically as “gender dysphoria,” a severe discontent with one’s assigned sex. Transgender people often take hormones and have surgery to become more like the opposite sex. A little over a year ago, Becker began injecting testosterone. He had his breasts surgically removed. 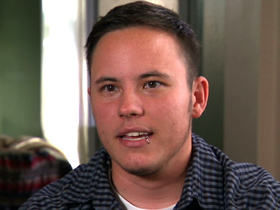 BECKER: My only regret is throughout this entire process is not starting it sooner.

VALENTE: Emboldened by the new Amazon Online series "Transparent" and "Orange is the New Black" on Netflix, which features a transgender actress, transgender individuals are increasingly speaking out about their needs and their lives. An Episcopal priest recently came out as transgender, and a community of Carmelite nuns in Canada just accepted a novice with both male and female physical characteristics. The novice, Tia Michelle Pesando, has written a book called Why God Doesn’t Hate You.

OWEN DANIEL-MCCARTER (Transgender Activist, Chicago House): Even in the past 14 years, it is an incredible change in the visibility of transgender people in the media, the number of transgender activist organizations, people who are trying to change the law, and the medical system for trans people. It’s remarkable.

VALENTE: Some studies estimate about one percent of the U.S. population is transgender, but there are no definitive statistics.

DR. ROBERT GAROFALO (Chief of Adolescent Medicine, Lurie Children’s Hospital of Chicago): It’s something that occurs with a much greater frequency than many of us think in this country and in this world. I think many of these children and many of these families live in isolation, and you don’t see them.

VALENTE: And there is little medical research about what causes some people to want to change their sex.

DR. GAROFALO: That’s the million-dollar question. Pinning it down to like, you know, genetics or hormones or environment has been very difficult, so there’s really no answer at this point. 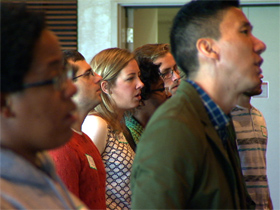 VALENTE: After spending the past decades struggling with how to minister to gays and lesbians, and whether to ordain gay clergy and allow same-sex marriage, churches now face a new moral frontier: how to respond to transgender people.

REV. EMILY MCGINLEY (Associate Pastor, Urban Village Church, Chicago): I think that it is something that churches should look at if they are seeking to be intentionally welcoming and hospitable places for folks who stand on the margins of society.

REV. MCGINLEY: If the first is a given that God creates all, right, and that God doesn’t make mistakes, then the question shouldn’t be “then what’s wrong with me?” The question should be what’s wrong with us that we can’t, that we don’t have space for folks to transcend and expand our understanding of what it can be to be female and what it can be to be male.

VALENTE: McGinley says many pastors still call it a sin to try to change one’s sex.

REV. MCGINLEY: This disconnect that you have within yourself is a result of some kind of brokenness either that you have participated in or that has been inflicted on you.

VALENTE: How should churches be responding?

REV. MCGINLEY: There’s a lot we can learn from our transgender brothers and sisters. But I also think that churches are very unlikely, en masse anyway, to explore the topic, because it’s mysterious, and it threatens our ideas of fixed boundaries of identity. 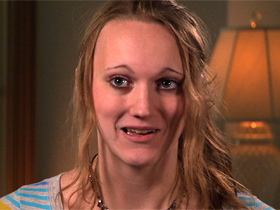 VALENTE: Consider Ande Biggs, who began life as Andrew, a boy. Most boys are born with a single X and Y chromosome. Biggs was born with a Y chromosome and two female X chromosomes, a condition known as Klinefelter’s Syndrome. As a teen, Biggs was attracted to males and was labeled a homosexual.

ANDE BIGGS: I’m not a gay man, however I do—I am interested in men. It’s a very difficult thing to explain to someone whenever they see a boy and that boy is telling them, “Hey, I like other boys, but, you know, I’m not a homosexual.”

VALENTE: Though Biggs, now 19, was certain from a young age she was meant to be female, she says it was a difficult decision to actually begin injecting female hormones.

BIGGS: I had received the prescription, I had the paper, I just had to go to the pharmacy and get it filled out. It took me five months to mentally prepare myself, to know that I am—I love myself enough to do this, like this is something I’d be doing for myself.

LAURIE MURRAY: Seeing him go from hating himself to loving who she is, to sit here and hear her say she loves what she’s doing, she loves her life—for a parent that’s just awesome, because years ago he didn’t.

VALENTE: Transgender people experience high rates of homelessness, unemployment, and depression, often the result of discrimination. They are more likely to be arrested. More than half of all transgender individuals report having considered suicide. Jordan Becker says he sometimes lay in bed at night wondering, why does God hate me? He contemplated suicide twice before deciding to begin his male hormonal treatments. 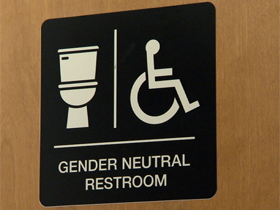 BECKER: I tried drowning myself in a toilet. That was the lowest point of my life.

VALENTE: Society seems to be moving much faster. The school of the Art Institute of Chicago, where a significant number of the students identify as gay or transgender, provides gender-neutral bathrooms and housing. Additionally …

BREE WITT (Associate Director of Public Relations, School of the Art Institute of Chicago): We recently had a change to our student health insurance policy where we’re now able to cover hormone therapy and gender reassignment surgery for our students.

VALENTE: The federal government now allows individuals to officially change their sex on social security cards and passports, and many states allow change to driver’s licenses and birth certificates. However the military, which now accepts gays, will not allow openly transgender people within its ranks. Jordan Becker spent 6 years in an army military police unit but had to leave the service last year when he began taking hormones.

BECKER: I can still shoot a weapon. I can, you know, still drive a Humvee. I can still protect my friends, my soldiers, so it’s not—it’s not a good feeling that I was working, I was protecting my freedom and America’s freedom and—but in return, under regulations, I was not accepted.

DR. GAROFALO: A fifteen-year-old transgender girl born a boy, and they wanted me to give estrogen to—and I was, like, are you kidding me? Like no way. Is it ethical to do that? I didn’t get any training in medical school about this. I had no idea. This was totally new. And then I got to know her, and I spent time with her, and really over the course of months my entire mindset changed from, like, is it really ethical to give this girl hormones to, like, would it really be ethical to not?

VALENTE: Reverend McGinley says it’s a tough issue for churches, because it forces us to reassess what it means to be a person—something transgender people insist goes beyond gender and anatomy.

DANIEL-MCCARTER: I feel like being a transgender person is a gift I was given. It’s something I consider very sacred. It’s allowed me to see the world in very different ways.

BECKER: Why waste your time judging me? I’m a normal person. It doesn’t matter what’s in my pants or under my shirt.

VALENTE: Like Jordan Becker, many transgender people live with hope. Becker says an insight came to him one day, like a light bulb turning on, that God doesn’t hate him but has created him for a special purpose.

We report from Chicago on how churches are responding to transgender people, especially as they become more and more visible in popular culture. At the Urban Village Church in Hyde Park, Rev. Emily McGinley’s ministry reaches out to transgender individuals.