BOB FAW, correspondent: In the backyard of their Minneapolis home, Native Americans Jackie and Kirk Crowshoe perform what they call a healing song. For many, what Native American rituals and ceremonies mean—what Indians believe and why—has seemed a mystery. But in these books it is expertly revealed and explained by this rumpled, 68-year-old white man, award-winning writer and spiritual teacher Kent Nerburn.

KENT NERBURN: My job was to watch, to record, and to serve in some capacity—to do what you have to do to make them open their hearts and to get their stories out that they want to tell.

FAW: Calling himself “a guerilla theologian who tries to find the spiritual in everything,” Nerburn has spent a career writing engaging and enlightening books about Native American people. In this trilogy he uses actual dialogues he’s had with Native Americans which are then spoken by fictional characters in what Nerburn calls “spiritual storytelling.”

NERBURN: My goal is to be present to their emotional reality and put it in people, in the voices and characters of people that are real people, and then try to make it so it speaks from honest emotions. My job is to present a truth that you will embrace more fully if you believe it as you read it. 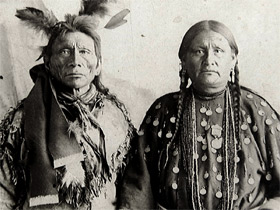 FAW: Nerburn says he felt an obligation because of what happened in this country to the Native Americans. It was nothing less than cultural genocide, he told parishoners at St Joan of Arc Catholic Church in Minneapolis.

NERBURN (speaking to congregation): These are an occupied people who were marked for extermination, relocation, starvation, military slaughter, and finally by re-education that ripped the heart out of their traditional ways.

FAW: So Nerburn began to explore—and listen—to Native Americans like Jackie Crowshoe, a Turtle Mountain Chippewa, and her husband, Kirk, a Nez Perce who initially was very skeptical about what this white outsider wanted.

KIRK CROWSHOE: My folks having been in the boarding schools, and when the boarding schools shut down my generation being adopted out into non-Indian homes. The abuses I experienced in those non-Indian, in that non-Indian home. Coming to terms with all of that I had little faith in or trust in particularly white men. And so of course I’m going to think that he’s only looking for some way to exploit us, exploit our culture for his own purposes

FAW: What made Native Americans like the Crowshoes open up and eventually trust Kent Nerburn is that this white outsider really did listen. 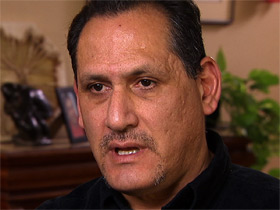 KIRK CROWSHOE: He listened, and what I mean by that is he intently heard me. There was something about his spirit when I talked to him that was very gentle, authentic.

JACKIE CROWSHOE: I think Kent is—he is such a remarkable man, but I think it is because of his, you know, study, you know, his theology, his—he’s able to come to this place because of his spirituality.

FAW: As he listened, what Kent Nerburn found was far removed from the Hollywood stereotype of bloodthirsty primitives who instead see everything in nature as living.

NERBURN: For native people, the land is alive. The events on the land are alive, the wind is alive. This degree of the land being alive and the land having its own spirit and its own story and its own teachings—it’s just part and parcel of the native way of seeing the world.

FAW: Kirk and Jackie Crowshoe explain how, for them, there is no distinction between the sacred and the everyday and that the simplest objects, like an eagle feather, are reminders of something greater.

FAW: Because of what he learned, Kent Nerburn told that Catholic congregation they—and all non-natives—would do well to embrace what Native Americans believe.

NERBURN (speaking in church): We believe that what the Creator has given us is enough, that the place he put us is where we belonged. For us the world was a mystery to be honored, not a puzzle to be solved. 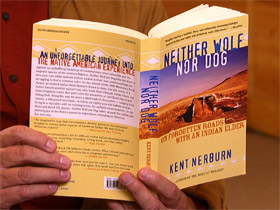 NERBURN (reading aloud): You named us savages, so that made us savages. You named where we lived “the wilderness,” so that made it a wild and dangerous place. Without even knowing it, you made us who we are in your minds by the words you used.

FAW: A one-time reporter and sculptor with a PhD in art and theology, Nerburn says he became more sensitive because Native Americans have given him a gift. As he puts it, “Their world and their way of seeing have enriched my world and my way of seeing.”

NERBURN: What these books do is they speak to the common humanity of us all, while trying to acknowledge the uniqueness of the cultural manifestations. I want these books to be healing books. They’re teaching books, healing books.

JACKIE CROWSHOE: Does it make my spirit happy that Kent is able to do something that many people, non-natives, can embrace and appreciate and understand and relate to, and who many Natives can say, “Thank you, that was done very respectfully. Well done.” That brings me hope, absolutely.

FAW: Ultimately, what he has learned and what he has written has brought Kent Nerburn the relief he was seeking.

NERBURN: You didn’t cause this, but your job is to take responsibility for the knowledge and to do something with it. FAW: Did you find a kind of forgiveness writing these three books?

FAW: “The shame in your blood’ was diminished?

NERBURN: It was diminished. I got lucky. I got to write these books. I got to know the people. I got to become the voice of the voiceless. So that’s my way through this, and in the learning maybe you get some peace. But that’s really all you can do.

FAW: For Native Americans, then, the landscape is marred with sadness and loss. But in this song of healing, as in the work of Kent Nerburn, there is also an echo of redemption and hope.

For Religion & Ethics Newsweekly this is Bob Faw in Minneapolis.

Kent Nerburn tries to find the spiritual in everything. An award-winning writer and spiritual teacher, he tells the stories of Native Americans so they speak, he says, “from honest emotions.” His job “is to present a truth that you will embrace more fully if your believe it as you read it…Their world and their way of seeing have enriched my world and my way of seeing.”