MATTHEW BARBER (University of Chicago): In under two days, over 300,000 Yazidi people were displaced from the Sinjar Mountains. As those people began to stream into the area where I was living, I recorded a lot of stories from survivors about what they had witnessed and what they had seen. The suffering that people recounted for me was really unbelievable, killing that they saw in the streets, fleeing and being separated from their families, not knowing where their relatives were.

MURAD ISMAEL (Yazidi Human Rights Advocate): A people that is more than 4,000 years old, being subject to religious persecution for no reason, only for their religious beliefs, and they are being persecuted on that identity. Our women, our children and men were defenseless, and we became victims of one of the largest, one of the largest atrocities of the modern world.

BARBER: The Yazidis are a very special religious community because they’re one of the only remaining religions in the Middle East with non-Abrahamic origins. The Yazidi religion has absorbed elements from many religious traditions in the Near East, but within their religious framework, are preserved some very ancient beliefs that no longer survive in any other religion. The reason that ISIS attacks the Yazidi community in this way is because they view them as pagan and polytheistic because they’re outside of the Abrahamic religions that have a written scripture. The Yazidis having an oral tradition, they have oral tradition and hymns, the fact that they have been accused unjustly of being devil worshippers, all of this constitutes an idea about them that serves as the justification that ISIS uses to attack 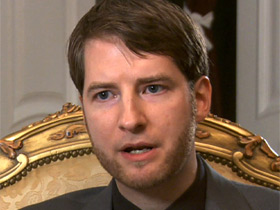 ISMAEL: We knew there were hatred against us, but we did not know it would be to this extent, that people would see us not as human beings. The very people that we co-existed with for thousands of years, shared the same community, visited each other, were friends. We never thought that people would turn on us and would put the guns on our heads and the heads of our children and our women and our girls.

BARBER: Upon the initial attack, even before ISIS had reached the city itself, as Yazidi civilians were trying to flee in their cars, they were stopped by the ISIS jihadists who would pull the families out of the car, first determine what their religion was. If they were Sunni Muslim, they were told to return to the city. But if they were Yazidi, the men were separated from the women, the women were loaded into trucks, and they were carried off. So it was a premeditated, sexually motivated campaign to enslave large numbers of women.

ISMAEL: They’ve taken about 7,000 Yazidi hostages. I was on the phone when two Yazidi women committed suicide because there were people outside trying to buy them for hundreds of dollars. I have a picture of an 11 years Yazidi girl who’s being forced to enslavement to a terrorist who is 70 years old. That Yazidi child can be your child.

BARBER: ISIS released a public document, an article explaining the rationale behind their slavery project. They proudly declared that they were reviving the institution of slavery that they believe never should have fallen into disuse. And they’re conducting the program according to their interpretation of early Islamic slavery norms. They actually believe that slavery is a healthy, spiritual institution because it prevents men from committing sexual sins. By having a sexual alternative to wives that men can sleep with, they won’t be tempted to sleep with maids or other women and therefore, they remain sexually pure. The Yazidi delegation that’s visiting Washington this week is asking the USgovernment to take action to help free those women quickly.

ISMAEL: We still have thousands in places that can be rescued, so we still have hope. As a human society, we can’t close our eyes on this problem. I know the Middle East is burning. I know that. We are tired of wars. I know we are tired of getting involved in any other conflict. But we must get involved when the problem touched the lives of a half million people, a peaceful minority, a minority that worked for peace throughout our history, a minority that supported the modern world. We deserve, we deserve peace. We deserve to exist in our land.

BARBER: ISIS believes that Yazidis should no longer exist within what they call “Muslim lands.” ISIS actually stated in their public document about their slavery project that God will hold Muslims accountable for allowing the Yazidis to have remained in the Middle East for this long. That the area that they call “Muslim lands” should not be home to a polytheistic, pagan group that’s outside of the Abrahamic, monotheistic trajectory.

A delegation of top Yazidi religious and cultural leaders came to the US this week (October 24-31) seeking help for their community in Iraq, which has been devastated by ISIS extremists. ISIS considers the ancient religious minority to be pagan. More than 300,000 Yazidis have been driven from their homes and need humanitarian aid. In addition, the delegation says it has documented nearly 7,000 names of Yazidi girls and young women who have been kidnapped by ISIS and forced into sexual enslavement. The delegation met with a variety of American political and religious leaders. Watch excerpts of interviews about the Yazidi crisis with Matthew Barber, a University of Chicago scholar who recently lived in Iraq, and Murad Ismael, a Yazidi human rights advocate. Managing editor Kim Lawton interviewed them after a meeting organized by the International Association for Human Values, founded by spiritual guru Sri Sri Ravi Shankar.