FATHER THOMAS FITZGERALD (Holy Cross Greek Orthodox School of Theology): Epiphany or Theophany basically means “appearance” or “revelation.” So when we talk about the Epiphany or Theophany of Christ at the Jordan River, we’re thinking about the appearance of Christ. Christ has come to identify himself with us. Christ has come to reveal the Holy Trinity to us.

LAWTON: Father Thomas FitzGerald teaches church history at Holy Cross Greek Orthodox School of Theology in Brookline, Massachusetts. He says Epiphany celebrations are especially meaningful at the Jordan River between Israel and Jordan, the place where the Bible says Jesus was baptized. 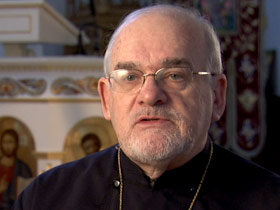 LAWTON: On Epiphany, Orthodox churches around the world hold a special worship service.

LAWTON: For Eastern Orthodox Christians, Theophany is particularly a time to celebrate the Trinity, the belief that God is three entities: Father, Son, and Holy Spirit. They take this from the Gospel accounts of Jesus’ baptism. 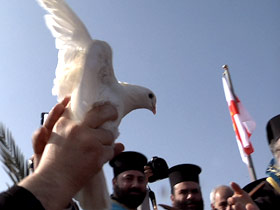 FITZGERALD: When Jesus goes into the water to be baptized, there’s the voice of the Father from heaven declaring that this is the beloved son, and the Spirit appears in the form of a dove. So we look back upon this important event as an expression of God’s revelation. God reveals himself as Father, Son, and Holy Spirit.

LAWTON: Some Orthodox churches still include doves as part of the service. Another common tradition is to hold at least some part of the Epiphany service outside.

FITZGERALD: In many places that are close to lakes or rivers or streams or even oceans, the practice is to go to that place and also have a blessing of those waters, as a kind of reminder to us that Christ was baptized in the water, but also as a reminder that the creation is valuable, the creation is good. It’s through the midst of the creation that we draw ourselves closer to God.

LAWTON: Sometimes a cross is thrown in the water by the priest and then retrieved by the faithful. In certain places, this can be a chilly endeavor. 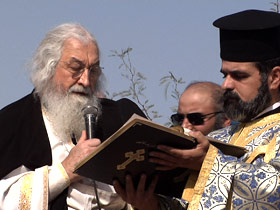 In the Orthodox tradition, Epiphany is also known as the Feast of Lights. It’s a time, FitzGerald says, to reflect on the idea of Jesus coming to be the light of the world.

LAWTON: FitzGerald says for him, and for millions of Orthodox Christians, celebrating that Jesus was baptized just as they were baptized is a profound reminder that He came to identify with all people.

FITZGERALD: He identifies himself with the poor, the needy, the sick, the afflicted, those who are living on the boundaries of society. And he’s come in some sense to be the Lord of all, not simply the Lord of the wealthy, the rich, the, the privileged, but to be the Lord of all those people who are willing to turn their lives over to Christ, to the Lord, and be followers of Christ.

LAWTON: I’m Kim Lawton at the Jordan River in Jordan.

For some Christians, celebrating the Feast of the Epiphany means marking the manifestation or appearance of Jesus. Western churches emphasize the visit of the wise men to the infant Jesus. But Eastern Orthodox churches focus on Jesus’ baptism in the Jordan River.