AMY SCHOMBS: I was raised as a Conservative, in a Conservative Jewish home. Steven, when I met him, was the 7 pm head usher at church, and we were sort of in the same place spiritually,but just happen to be in different religions. We spent a lot of time contemplating our decision to get married, and we talked with a rabbi, we talked with a priest, and we actually got married in a temple with a bishop’s dispensation, and that made us both feel good.

AMY SCHOMBS: We both wanted to keep our own religions and our own identity for ourselves, so we knew from the beginning that we didn’t want our children to be just one of our faiths. 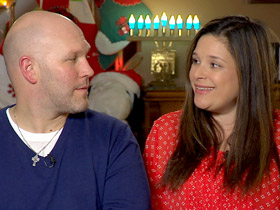 ROLLIN: You were both comfortable with that?

STEVEN SCHOMBS: We were going to teach them both, and then when they were adults leave it up to them to decide what they want to do.

ROLLIN: But the process wasn’t as easy as they thought.

AMY SCHOMBS: The hardest part was before we found a community that would accept us as two different religions, because when we would go to temple to celebrate holidays, Steven would be uncomfortable. When I would go to church I would be uncomfortable. Everyone would kneel. As Jewish woman, I don’t kneel. So we were never fully comfortable where we were, and we really wanted a place that we could worship, because worshipping was important to both of us.

ROLLIN: They found what they were looking for in an organization called the Interfaith Community, founded by Sheila Gordon about 25 years ago, who herself is in an interfaith marriage. 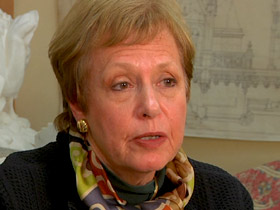 SHEILA GORDON: Our organization really is trying to help families and children adapt in a world that is changing very rapidly. We have to figure out how people can bring two religions to one family.

ROLLIN: The Interfaith Community, which has about 500 members and operates mostly in the New York area, tries to educate both parents and children. They celebrate both Jewish and Christian holidays. They hold classes and run field trips supervised by Christian and Jewish educators. On this day, a group of 12- and 13-year-olds went on a retreat and visited both Jewish and Christian places of worship. Among other sites they visited was the famous Cathedral Church of St. John the Divine in New York City, where they participated in a prayer service. Later on, they gathered to reflect on what they saw at a Jewish Sabbath service.

BOY: As you were following the Torah, people would stop you and shake your hand. You didn’t know who that person was, but they made you feel welcomed.

DEBRA FRICANO(Jewish Educator): The prayer shawl that people wear have some things at the bottom. They are knots, strings called tzit tzit, and it’s used as a reminder for how to be our best selves.

ROLLIN: And how are these kids dealing with their two religions? 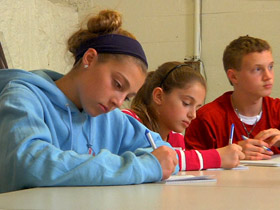 BOY: The more religion you practice, the more you’re closer to God. So that’s what I think is pretty cool about it.

GIRL: When people ask me what religion I am, I’m like oh, I’m Jewish and Catholic. And they’re like, "Awesome, you get double the presents then," and I feel like no one actually sees past the fact that I maybe get double. Like no one thinks really further than that. Like, "Oh, you get to experience more religion. You get to learn more."

ROLLIN: So you don’t feel any pressure that you have to decide at some point?

BOY: I feel a little, because if you do choose, like you’re letting one parent down and the other one like in their favor, but I don’t know. I don’t think I’m gonna choose.

ROLLIN: Guilt about letting one parent down is only one of the aspects of embracing two religions that troubles Rabbi Reeve Brenner. 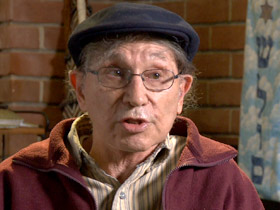 RABBI REEVE BRENNER: The child is being educated to believe Jesus was the Messiah, resurrection, virgin birth, sin transmitted from generation to generation, a God that dies, believe in him and you get the next world. And then you’re told the rest of the week that’s not what Jews believe. If that’s not confusion I don’t know what is.

ROLLIN: Amy Schombs has another view.

AMY SCHOMBS: Aren’t all the values that we hope to raise our children in the same regardless whether they are Jewish, Catholic, Muslim? Whatever it is, we hope to raise good children and good people, and what a world we would have if everybody understood other religions.

ROLLIN: Even with his doubts, with the hope of keeping some Judaism alive, Rabbi Brenner has officiated at interfaith weddings for many years.

RABBI BRENNER: If some human being can bring themselves to agree to want to bring up Jewish children, whether they’ve converted or not, we should be marrying them, interfaith marrying them, and outreach in every which way we can.

ROLLIN: According to a recent Pew poll about Jews in America, interfaith marriage rates have risen dramatically in the last 50 years. Among Jews who have married since the year 2000, nearly 6 out of 10 have a non-Jewish spouse. Twenty percent of their children are being raised Jewish, 25 percent partly Jewish, and one-third are not being raised Jewish at all. And Jews who are the children of interfaith marriages are more likely to intermarry as their parents did. 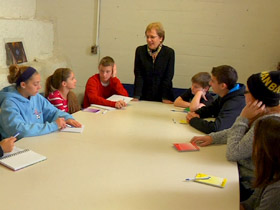 ROLLIN: Which religion do most children eventually choose, if they do choose?

SHEILA GORDON: The greater numbers seem to be to choose, if they choose, is to choose Judaism, nd I have theories about why that happens, but that’s what the pattern is.

GORDON: One is, of course, the Jews are a small population, so there’s a, a stronger feeling that you’re preserving something that wouldn’t be preserved otherwise.

ROLLIN: In the Schombs family, Ian, the eldest of the four children, has chosen Judaism and has begun to prepare for his bar mitzvah.

IAN SCHOMBS: I felt when I went to a real church and a real temple that I just felt that I fit in more with the Jewish temple, and even during services I just feel more connected.

ROLLIN: And how does Ian’s Catholic father feel about his son choosing Judaism?

STEVEN SCHOMBS: I feel OK with it. After all I married my wife, who’s Jewish, and she married me, who’s Catholic. We respect each other’s religion, and I feel like...I don’t know, I feel like I’m part Jewish just because our family does these things together, and I really don’t think that there is a wrong way to do it. 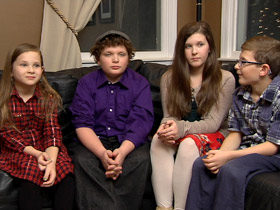 ROLLIN: Hailey, seven, is the youngest of the Schombs children.

HAILEY SCHOMBS: I think I will stay both religions.

ROLLIN: Why do you think so?

HAILEY SCHOMBS: They are both really fun, and it’s just really hard to choose.

EVAN SCHOMBS: I think I will probably stay both, because when I’m older I think I want my kids to feel the same way I do, like celebrating both holidays.

AMY SCHOMBS: I think that it would have been really easy as an interfaith couple to make a decision not to do anything as we raised our children, because then we wouldn’t have all these hurdles that we had to overcome, but for both of us, we felt that religion was important. We both felt that it was important to have a place in your heart to go to in times of sorrow or in times when you felt you need prayer.

ROLLIN: As more and more families choose to raise their children in two faiths, religious institutions may become more accepting of this choice and be more welcoming to families who have two religions rather than one.

How do interfaith couples decide which faith their children should adopt? “We both wanted to keep our own religions and our own identity for ourselves, so we knew from the beginning that we didn’t want our children to be just one of our faiths,” says Amy Schombs, who is Jewish and whose husband is Catholic.

Faith and Family in America, Part Two: Religion and Parenting