BOB ABERNETHY, host: The international community continued to mourn the victims of last week’s terror attacks in Paris amid concern about growing hostility toward minorities. In France, security officials guarded synagogues and tried to assure Jews that they are safe. In many quarters, there is renewed debate about Islam and extremism. Many Muslim groups condemned the violence, but also urged more public respect for religion. Pope Francis waded into the controversy, saying while no one should ever kill in the name of God, people also should not provoke or insult the faith of others.

Joining me now are Kim Lawton, our managing editor, and Haris Tarin, director of the Washington office of the Muslim Public Affairs Council. Haris, welcome back here. What has this week meant for Muslims in this country? 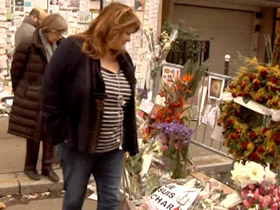 HARIS TARIN (Muslim Public Affairs Council): Well, what I think that it’s done is that it’s reignited the debate around Islam and violence again. And American Muslims are having to come out and say that this type of violence and extremist ideology does not represent who they are or what they believe or even the 1.6 billion Muslims across the world who practice their faith peacefully on a daily basis.

KIM LAWTON, managing editor: But are there specific responses? Are there, you know, practical things that the U.S. Muslim community can do within this environment?

TARIN: There are. The first thing that the American Muslim community can do is engage fellow citizens, really understand, really help people understand who they are, what they believe, and where they’re coming from. There’s a lot of misunderstanding. Four out of ten Americans, only, know a Muslim. If that number increases, I think the misunderstanding, the misinformation, will also decrease.

ABERNETHY: Is there something that you can suggest here that the United States government can do to wipe out or control the people doing this violence? 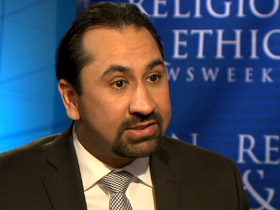 ABERNETHY: And can Muslims themselves take care of the people doing these terrible things?

ABERNETHY: But are they effective? Are they doing it?

TARIN: They are, I think they’re dying on a daily basis and they’re doing it. And they’re the only ones who can actually win this battle because it is about an extremist ideology that they are going to have to stand up against. So in places like Syria, Iraq, Pakistan, Afghanistan, they’re the ones who are taking on the fight and dying, and it’s working. And there’s Muslim scholars who are coming out on a daily basis and pushing back against this ideology.

LAWTON: How is the situation in the U.S. different from what we’re seeing in Europe where we’re seeing a real heightening of all these tensions? 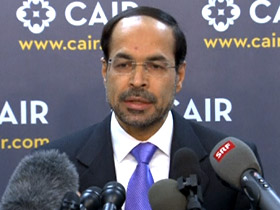 TARIN: Well, I think in America, there’s a different model of engagement and integration. American Muslims are demographically more integrated, socioeconomically, they’re engaged in the civic political process a lot more. And there’s more institutions that are doing the type of work of integrating into the civic and political process in America.

LAWTON: And we’ve seen renewed debate about insulting religions and whether there should be laws that outlaw defamation or blasphemy. Where do you come down, because a lot of Muslims support that kind of thing?

TARIN: I think our perspective and the Islamic principles of this is that there should be no laws. The Quran actually challenges the opponents of the prophet to debate him, and the Quran quotes them saying “madman” and “magician,” people were calling him these types of names. But the Quran does not in any way sanction violence or any type of retribution for that.

LAWTON: And do you see though, this, what is your message to your fellow Muslims around the world who are pushing to say, “We shouldn’t insult religion”?

TARIN: The message is engage in debate. The best type of response is discourse, debate and conversation, not any type of violence or action.

ABERNETHY: Thanks to Haris Tarin of the Muslim Public Affairs Council, and to Kim Lawton of this program.

Muslims around the world are “the only ones that can actually win this battle because it is about an extremist ideology that they are going to have to stand up against,” says Haris Tarin, director of the Washington office of the Muslim Public Affairs Council.

Muslims in the UK