JUDY VALENTE, correspondent: Reminders of turmoil still mark the streets of Ferguson. Memorials left at the site where an unarmed African American teenager was shot last summer by a white police officer. Buildings burned or vandalized during the sometimes violent protests that followed both the shooting and a Grand Jury’s decision not to indict the officer involved. Barricades surrounding the Ferguson police department.

But as this traumatized city prepares for the national Martin Luther King holiday, there are also signs of hope. Several months after Michael Brown’s shooting, Ferguson remains a city searching for healing. Through a variety of initiatives, some church leaders are trying to become bridge builders. 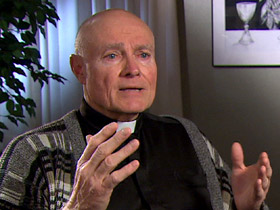 FATHER ROBERT ROSEBROUGH (Blessed Teresa of Calcutta): When I came to prayer one morning the thought occurred to me that Ferguson has become the new Bethlehem where Jesus leans into our humanity once more.

VALENTE: As a young seminarian in the Sixties, Father Robert Rosebrough marched against segregation with civil rights activists in downtown St. Louis.

Now the pastor of Blessed Teresa of Calcutta parish not far from where the shooting occurred, “Father Rosy” as he’s known, says it’s time to complete Dr. King’s vision. He notes that laws changed during the 1960’s, but not necessarily, hearts.

FATHER ROSEBROUGH: We have not seen each other as brothers and sisters, working and walking together as one family.

VALENTE: You have challenged your congregation to go on a three-year process. 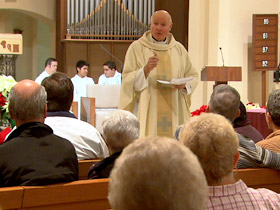 VALENTE: What are you asking them to do?

FATHER ROSEBROUGH: I’m asking them to risk and share their vulnerability.

VALENTE: A key word these days in Ferguson is “dialogue.”

REV. STARSKY WILSON (St. John’s United Church of Christ): When you look out on the streets and protest lines you see a very diverse community working together, acting together.

VALENTE: St. John’s was a host church for the “Black Lives Matter Freedom Riders” who came from twenty states last fall to lead peaceful demonstrations. Several St. John’s members are now trained in techniques of non-violent protest.  Reverend Wilson is also vice chairman of the Ferguson Commission, a group appointed by the governor and tasked with addressing the complex issues of poverty, lack of affordable housing and educational opportunity in the African American community. 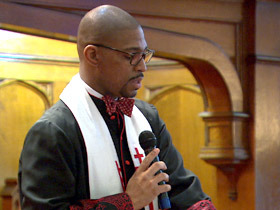 REV. WILSON: We recognize that what we saw on August 9th was an exposure of the socio-economic challenges, the deep divisions that persist in our community and that is gonna require a longer-term commitment.

VALENTE: While the street demonstrations increased tensions, especially those that turned violent, Rev. Wilson says they are a spark for igniting change.

REV. WILSON: The critique of someone else’s tactics based upon one’s own desired behavior, or one’s own principles of behavior, is the essence of privilege. Work through the system. Register to vote. Run for office. These are all things that work really well for middle class people who are in the mainstream in America, but they don’t work very well for 18 year-olds who are poor, who come out of an unaccredited school district in Ferguson, or the many Fergusons throughout this country. People ask me when do you think the protests are gonna stop? And my answer is that the protests will stop when reforms begin. 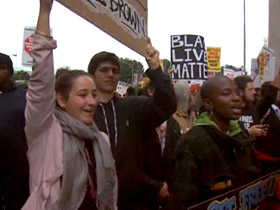 VALENTE: The Reverend Mike Trautman, pastor of the First Presbyterian Church, says the turmoil was a wake-up call for many in his congregation, who chose to live in Ferguson because of its diversity.

REV. MIKE TRAUTMAN (First Presbyterian Church): The people who stayed here stayed because there was something that they gained from being in a racially mixed community. I began to reach out to many of my African American colleagues. Because I needed to listen to their story. I needed to listen to their, what they were talking about and it was amazing to me that, to listen to how many of them who are people of means and education, who are treated like strangers in their own community.

REV. TRAUTMAN: Here is a kind an opportunity, a living laboratory by which we try intentionally to work through toward that beloved community that Dr. King invited us to. 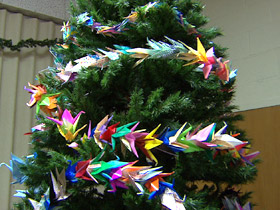 VALENTE: Trautman says his church has received expressions of support for the people of Ferguson from Presbyterians all over the country like this handmade chain of thirteen hundred paper cranes from a congregation in California. The cranes are symbols of peace.

What about the police, their needs? That’s a question that concerns Deacon Mark Byington of the Catholic Archdiocese of St. Louis, who is himself a former Dallas police officer.

DEACON MARK BYINGTON: The common phrase that I continually heard was "us and them." Us and them. Within the faith community, it’s "we." And that if I see you’re a creation of God and I’m a creation of God, well then, I can’t do anything in a sense willfully to harm you.

VALENTE: Byington plans to lead a non-denominational weekend of reflection for area police officers at this Jesuit retreat center overlooking the Mississippi River.

DEACON BYINGTON: I really hope to help officers come back to center so they have peace in their own selves.

VALENTE: Byington says the retreat will provide officers with what no amount of training at the police academy can give: silence, solitude and a chance to process their feelings. 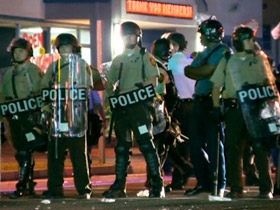 DEACON BYINGTON: The key thing for those three things is silence, to get rid of all the noise that goes on and if you’ve ever ridden in police car, a squad car or a unit, you’ll understand that it’s constant noise, the radio, the car itself, if you’re working with a partner, you’re continually having to dialogue with. There’s no time in a sense to think.

VALENTE: Sergeant Trevor Wild is a 19-year police veteran. Last August, he was called in from nearby Franklin County to help in Ferguson.

SERGEANT TREVOR WILD: Rocks and bottles and things, and everything was in such a melee it was hard to discern one thing over the other. Personally, I’m in uncharted waters. You know, I’ve never experienced anything in my law enforcement career like we, like you know, the protesting.

VALENTE: So far, forty police officers from among the hundreds that serve Ferguson and the surrounding jurisdictions have expressed an interest in Deacon Byington’s retreat.

SERGEANT WILD: I think that the nucleus of people will draw more people. And I think it will take off because stress accumulates and this is a way to get rid of that.

VALENTE: Back at St. John’s United Church of Christ, Reverend Starsky Wilson still worries that all of these efforts won’t be enough unless additional churches get involved.

REV. WILSON: Across the country, even with the faith leaders who are engaged, they still find themselves, we still find ourselves, at a minority, and that’s for black and white churches, to be clear and to be fair.

VALENTE: On a positive note, Reverend Wilson says the role churches have played is making an impression on young demonstrators who may previously have had no experience of church.

REV. WILSON: I now hear young people who don’t come to church and I see in a hundred forty characters or less on Twitter them speak about Jesus as a radical revolutionary cat who would be standing with them in protest.

VALENTE: In his famous letter from Birmingham’s city jail, written in 1963, Dr. King said some communities mistake a lack of tension for a kind of negative peace. He equated true peace with the presence of justice. It is that true peace many in Ferguson are seeking.

Black and white religious leaders in Ferguson, Missouri, are trying to help their divided community heal. “Here is an opportunity, a living laboratory by which we try intentionally to work toward that beloved community that Dr. King invited us to,” says Rev. Mike Trautman, pastor of First Presbyterian Church.