LUCKY SEVERSON, correspondent: If it’s 5:00 pm on Sunday, and it’s the Zia Carlo Brew Pub in Texas, it must be time for church.

In no way is this meant to make light of worshipping. It’s just another way. Pastor Phillip Heinze is a senior pastor at the Calvary Lutheran Church in Fort Worth, Texas. He started worshiping in a pub four years ago when he realized that attending church for some people is frightening.

PASTOR PHILLIP HEINZE: We had a couple of young men come, and they say the most difficult thing for us was walking through those doors—that for us church just is a scary place. That was probably the conversation that informed me the most. I said, well, let’s try a new church in place that’s not so scary. 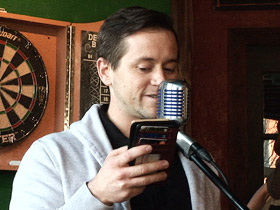 PASTOR ETHAN BEILER: You are welcome and accepted and loved here, and I say this confidently, because that’s exactly what Jesus did and said.

SEVERSON: This experiment has been so successful the Calvary Lutheran Church ordained Pastor Ethan Beiler as a full-time minister for this and another church-pub in Fort Worth.

Although the music may not sound like a church choir, this is a church service.

“Our Father, who art in Heaven, hallowed be thy name...”

PASTOR HEINZE: And that, for me, is one of the most powerful moments to hear the Lord’s Prayer, prayed in this place.

PASTOR BRYAN BERGHOEF: Welcome friends, to Pub Theology DC. It’s great to have you with us tonight.

SEVERSON: Here in Washington, you can find Pastor Bryan Berghoef of the Christian Reformed Church of North America meeting with folks from varying denominations, or none at all, in a back room of the famous Bier Baron Tavern. 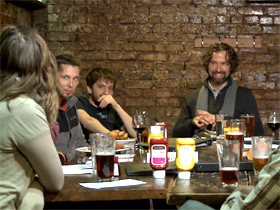 PASTOR BERGHOEF: Our group has no prayer, no worship, no preaching—just open conversation.

SEVERSON: The first topic of discussion: would God intervene for one team or the other in the Super Bowl.

ATTENDEE: This whole thing for me brings up the overall question is God an interventionist? When you answer that then the rest of this resolves itself.

PASTOR BERGHOEF: People love getting into topics that really stretch the mind, whether it’s about free will or good and evil or is there an afterlife and if so what is that like? People want to engage those things and I think increasingly in a setting where the conversation can explore the edges that perhaps certain faith traditions have sort of not allowed.

PASTOR STEVE HOLLEY: My congregation comes to this church on Sunday mornings, and we don’t serve beer. The strongest thing we serve is coffee.

SEVERSON: If the number of churches in pubs continues to grow, Pastor Steve Holley says it will not be with the help of the Immanuel Bible Church in Springfield, Virginia. Holley is the pastor of ministries at this nondenominational megachurch. He says his congregation would oppose mixing religion with alcohol. 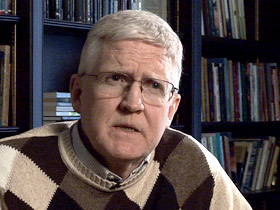 PASTOR HOLLEY: You know, the Scriptures ask for us to be sober-minded, to not walk in drunkenness, but to really focus on the goodness and grace of God. And I think when your minds are desensitized, when you use alcohol to try to combine that in some sort of worship environment, I just don’t see how that is helpful.

PASTOR HEINZE: We’ve been doing this since 2011. I cannot remember any occasion where any of the folks that we had—coming here for pub church have ever been over-served.

PASTOR BEILER: Grab some more beer, grab some pizza, sit down and enjoy.

SEVERSON: Pastor Beiler’s thought is similar to one expressed by Pope Francis. He’s quoted as saying, “We need saints that love the Eucharist, that are not afraid or embarrassed to eat a pizza or drink a beer with their friends.”

PASTOR BEILER: “The body of Christ given to you.”

SEVERSON: Not quite as many in the congregation as usual. It’s Super Bowl Sunday. But most people here are participating in Communion. 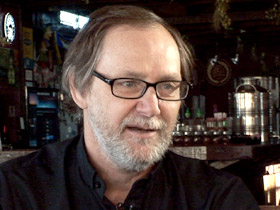 PASTOR HEINZE: We’ve done three baptisms here at Zio Carlo, which is, again, a powerful kind of experience to have a baptism in a public space. We baptized a mother and her son who had never considered that. Now she’s moved on to go a traditional church because she has kind of found the Lord.

SEVERSON: Surveys have shown that among Christian denominations, many are losing members, young folks in particular. In fact, it was some of the older generation in Pastor Heinze's congregation that encouraged him to preach in a pub.

PASTOR HEINZE: What they want us to do is figure out a way to get their grandkids into it, not just into the pew, but into faith. It’s not about the pew; it’s not about the church. It’s about do you trust God and believe in Jesus as the one who gives you the ability to live your life in a different way?

SEVERSON: It’s a message that rings right for Chris Cook and Ashley Richardson, engaged to be married. Neither has been attending church for some time.

CHRIS COOK: Not probably since I was in high school. 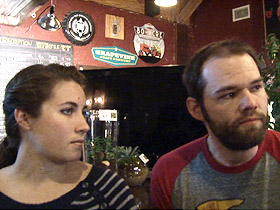 ASHLEY RICHARDSON: I went to a few different churches, but I never really found a family at any of them.

SEVERSON: The couple has asked Pastor Beiler to marry them, and they think they’ve found a church.

RICHARDSON: I don’t know that I would have the confidence to go into a church that’s traditional just because it’s—

COOK: You feel a little bit out of place.

PASTOR HOLLEY: One of the things that you don’t want to lose sight of is the glory of God and his gospel, and I think that when you try to move entertainment, which is what I would consider that is, into the church you lose sight of the real purpose of the church of advancing the gospel of Jesus Christ to the world.

SEVERSON: Pastor Holley believes church-pubs are a passing fad that won’t stand the test of time.

PASTOR BERGHOEF: I don’t know if it’s an answer or a next thing, but I think it just speaks to people’s hunger. So I think it’s a complement, really, not necessarily a replacement to our traditional churches or synagogues or religious local congregations, but I think it’s a supplement. 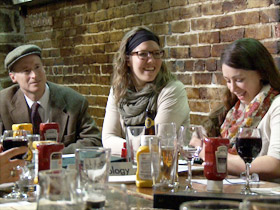 SEVERSON: At Pub Theology in Washington, most believe that traditional churches are too rigid and confining. Chris Chataling Samson, a pastor at a Presbyterian church, says he can understand why people are leaving.

PASTOR BEILER: But I think there is a great number of new missions that are starting out throughout the United States, throughout the world that will look very, very different from what we’ve been used to over the past couple of decades.

SEVERSON: This particular pub mission may be only a fad, but don’t tell that to Katie Samson.

KATIE CHATALING SAMSON: If anything, everybody has been really excited about it. They’re, like, beer, religion, faith: talking about it together in a community—this is such an awesome idea. Why don’t we do this for church all the time?

SEVERSON: It’s estimated there are upwards of 130 church pubs in the US, many more in Europe, and that the number is growing. For Religion & Ethics NewsWeekly, I'm Lucky Severson in Fort Worth, Texas.

Pastor Phillip Heinze began holding church services in a bar when he realized that attending a regular church was uncomfortable for some people. “They say the most difficult thing for us was walking through those doors—that for us church just is a scary place. That was probably the conversation that informed me the most. I said, well, let’s try a new church in place that’s not so scary.” There are a growing number of religious services and conversations in pubs, but the trend has its critics.