DAN LOTHIAN, correspondent: Hanif Qadir knows first-hand how easily radicals can claim young hearts and minds. Twelve years ago he traveled from Britain to Afghanistan to help women and children caught up in war, but was reeled in by the Taliban.

HANIF QADIR (Active Change Foundation): I wanted to do something positive, but by getting involved with them I was slowly drawn into radical thinking, radical views, and then slowly being sucked into looking at other options of doing positive work, and that even meant violence.

LOTHIAN: The depth of that violence is on display across the internet. Extremist groups like ISIS spew disturbing rhetoric and proudly carry out beheadings. It’s often done in the name of religion.

PROFESSOR ALI ASANI (Harvard University): People have tended to focus very much on, okay, this has to do with Islam, but it is ultimately an Islam that is interpreted by criminals.

LOTHIAN: However the Qur’an is interpreted, radicals are finding new recruits in the US and around the world, and social media is expanding their reach. Professor Ali Asani, who heads Harvard’s Islamic studies department, says the appeal may defy logic, but to the right audience it makes sense. 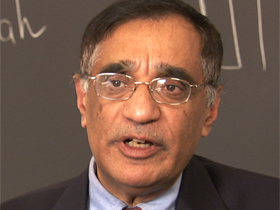 LOTHIAN: Some argue many of these young recruits lack a deep understanding of Islam—religious illiterates who are searching for a cause greater than themselves.

PROFESSOR MIA BLOOM (Center for Terrorism and Security Studies, University of Massachusetts at Lowell): They really don’t have the ballast to be able to say, “No, I don’t think that’s what the Sura al-Tawba says.” They don’t really have the knowledge-base to be able to fend off that kind of manipulation of the religion that these groups are doing to convince them that this is the way that they can be the best Muslims they can be.

LOTHIAN: But some of the foreign recruits join the fight in Syria and Iraq with their eyes wide open. True believers in radical Islam. Professor Asani says they’re also lured by money, housing, wives, and a sense of belonging.

LOTHIAN: And it’s not just young men. Three teenage girls from Denver, Colorado were detained in Germany after apparently trying to join Islamic militants in Syria. It’s reported dozens of French girls have also run away from home to sign up with ISIS.

Mia Bloom, professor of security studies at the University of Massachussetts, Lowell, has been investigating the recruiting of Western girls.

BLOOM: At some level there may be this utopian ideal of being a Muslim, living in a Muslim society. But I think for the most part what they’re saying to the girls is everything is going to be taken care of for you. 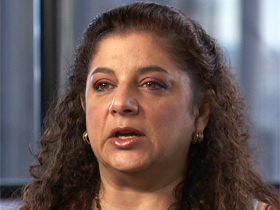 LOTHIAN: So it’s kind of a two pronged appeal to these girls. It’s one of religion, but it’s also one of we can give you things, right?

BLOOM: We’ll pay your expenses once you get here; we’re going to arrange your marriage. You know, in the afterlife sitting by Muhammad you’ll be a hero to your community.

LOTHIAN: Few of the young women end up on the front lines. They typically cook, clean, and take care of kids. They support the violent radicals behind the beheadings of Americans and many others. Aren’t these young girls frightened by the videos that we see out there, the violence? Does that not turn them off?

BLOOM: They may think either that it’s propaganda, and they don’t believe it, or they may actually be attracted to the fact that these groups are powerful and that they are able to stand up to the United States and Britain.

LOTHIAN: A new report by Richard Barrett, who led the UN’s al-Qaida and Taliban monitoring team, says through electronic media ISIS “pays considerable attention to its image and tries to balance pictures of horror—intended to demoralize its enemies—with a softer image to encourage its friends.” As the US carries out airstrikes in hopes of defeating ISIS, Barrett’s report claims that “about 15,000 foreigners have joined the Islamic state since 2011.”

LOTHIAN: Imam Talal Eid with the Islamic Institute of Boston warns against this radical ideology, even when he’s speaking to educated students in quiet suburbs.

IMAM EID: After the sermon the students will come to me and say, why you are telling us this? We know it. Are you afraid of us? None of us here is having this kind of mentality, and you keep reminding us. I said, I tell them I feel that I have to say these things.

LOTHIAN: But with about three million Muslims in America, Imam Eid wants the public to have some perspective.

IMAM EID: I would not tell you that this movement is not serious. It’s dangerous because they kill people. It’s not that much difficult to get one out of ten thousand people. That’s what they are getting.

Recruitment Video: “We have brothers from Bangladesh, from Iraq, from Cambodia, Australia, UK.”

LOTHIAN: Professor Bloom wants to shed more light on tactics being used to recruit those young people, not only in this country but overseas. She’s co-writing a book titled Small Arms: Children and Terrorism.

BLOOM: To figure out, are there ways that we can interrupt the process to prevent children from being involved?

LOTHIAN: And Active Change Foundation, a British organization, is denouncing the violent actions of ISIS as it works to keep more young men and women from becoming radicalized. The man behind this group? Hanif Qadir, who described earlier how he was sucked in by radicals in Afghanistan.

Islamic terrorist groups like ISIS and the Taliban are finding some success appealing to young Muslims from Western Europe and the United States. They use the internet and social media to convince uneducated or marginalized men and women they will be rewarded by Allah for joining their cause. While some recruits are drawn by their own extremist beliefs, others are lured in much more deceptive ways.