FRED DE SAM LAZARO, correspondent: The masses start at 6 a.m. and continue uninterrupted until 9 p.m. seven days a week at the Basilica of Our Lady of Guadalupe. This building, erected in the 1970s, is the fourth structure in a complex that dates back 500 years, when believers say Mary, the mother of Jesus, appeared here.

MONSIGNOR JORGE ANTONIO PALENCIA (Basilica of Our Lady of Guadalupe): Since the apparitions of Our Lady that happened in 1531, this place has become a place of worship, and Our Lady has accompanied the nation across the foundation, through the independence movement, then through the revolution movement.

DE SAM LAZARO: All told some 20 million people come here each year, some on their knees for the last leg of the pilgrimage. They come from across Latin America and the world, though most are from Mexico, praying for help with their needs and in thanks for favors received.

For me she’s everything, the most important saint in our religion; she’s our mother.

She helps me study.

She fell five months ago and couldn’t walk. Our Lady helped her recover. 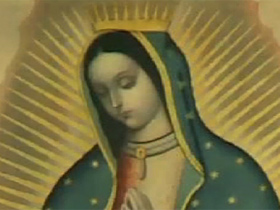 DE SAM LAZARO: Her story—some say legend—is richly displayed in statues and art around the complex. In 1531, the Virgin Mary appeared before Juan Diego, an Indian who had been converted to Christianity by the conquering Spanish. She asked that a chapel be built here. The request was relayed to the bishop, who in turn asked Juan Diego to bring back a sign to confirm the divine apparition.

MONSIGNOR PALENCIA: And the sign that was given to him were Castilian roses that at that time were impossible to be found in America. But that was not only the sign. From the clear white tilma of Juan Diego, which was the robe—we say the coat, he was bringing the roses inside the coat. When he opened the tilma, the image that you are looking in the back of me, the original one appeared.

DE SAM LAZARO: That original cloth and image, kept behind glass at the basilica’s altar, has endured now for 500 years—the symbol, church leaders say, of unity relevant until today.

MONSIGNOR PEDRO RIVERA DIAZ (Basilica of Our Lady of Guadalupe): The Virgin was a woman, a Jew, the mother of Jesus, Catholic but with a Muslim name. Everything about her symbolizes unity.

DE SAM LAZARO: And unity was sorely needed at the bloody birth of this nation in 1521, after the Spanish conquered it from the Aztecs.

BERNARDO BARRANCO (Center for Religious Studies of Mexico): It was not only a military conquest; it was a religious and cultural conquest also. She represented comfort for the people who were humiliated and conquered by the conquistadors.

DE SAM LAZARO: But just exactly who she was is an interesting question, says religion scholar Bernardo Barranco. He says one reason the Virgin of Guadalupe may have worked as a unifying—or pacifying—force is that this was the site of a temple to Tonantzin, a mother figure among Aztec deities long before the Spanish arrived. In New Spain, as Mexico was first called, the Virgin’s image—cloaked in Indian garments —may well have represented Tonantzin, albeit Christianized. Barranco says the Guadalupe shrine certainly helped the Spanish cause of converting the Indians.

BARRANCO: Christianity was imposed over the generations, and at the same time the image of Tonantzin starts to fade away and the Christian Virgin is seen more. The new Virgin has more indigenous characteristics in cultural terms. It is a “Mexicanization” of the Virgin.

DE SAM LAZARO: Through the years, questions have been raised about the authenticity of the Guadalupe story. Some scholars note that the first written record of Juan Diego’s existence is found more than 100 years after the 1531 apparition.

MONSIGNOR DIAZ: I’m not only a religious person. I’m also a scientist, a chemist, and some of the evidence we have is not easy to explain away.

BARRANCO: The biggest question was, was he making a saint out of someone that didn’t exist? There was a heated debate. They consulted stories, bibliographies, historians, academics, and at the end they decided to leave it up to faith. Historically they can’t prove the nonexistence of Juan Diego, and the religious can’t prove his existence. It ended up being a leap of faith.

DE SAM LAZARO: And in the end he says it doesn’t really matter whether or not the apparition really happened. Ninety percent of Mexicans have an unshakable faith in the Virgin, her image a cloak of protection for them through life. On December 12, the Virgin’s feast day, church officials estimate two million people will congregate in what is the Catholic world’s single largest pilgrimage destination.

For Religion & Ethics NewsWeekly, this is Fred de Sam Lazaro in Mexico City.

Roman Catholics, Eastern Orthodox, and some other Christians commemorate the belief that the Virgin Mary was bodily taken into Heaven at the end of her earthly life. This celebration of Mary marks what is called the Feast of the Assumption. A shrine to Mary in Mexico City is the most popular Catholic pilgrimage destination in the world. Some 20 million people a year are inspired to come and pray and thank her for her help. “This place has become a place of worship,” says Monsignor Jorge Antonio Palencia of the Basilica of Our Lady of Guadalupe.