KIM LAWTON, correspondent: Southeastern Turkey shares a 500-mile-long border with Syria. On this day, the view into Syria looks quiet, peaceful even. But just a few miles from here, Syrian government forces, rebel groups and ISIS are waging a brutal battle for control. So far, nearly 1.6 million Syrians have sought safety in Turkey, and more are coming every day.

SAVAS METIN, Kimse Yok Mu: They escaped from this conflict with their own clothes. They couldn’t bring any kind of stuff, their belongings, together with them. They just escaped. They left everything behind.

LAWTON: Since the beginning of Syria’s civil war in March 2011, nearly 11 million people have been forced to flee from their homes. Almost eight million are displaced inside Syria, while three and a quarter million have ended up in neighboring countries. Daryl Grisgraber focuses on the Middle East for the advocacy group Refugees International.

DARYL GRISGRABER, Refugees International: We’re really talking huge numbers of people at this point, about fully half the population of pre-war Syria needing humanitarian assistance and really being dependent upon that. It’s just been very hard to keep up with both the needs and the numbers. 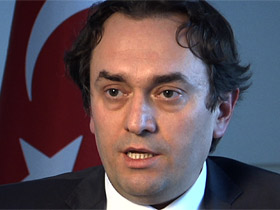 LAWTON: Savas Metin is general secretary of Kimse Yok Mu, a Turkish nongovernmental aid organization that is part of a civic movement started by Islamic scholar Fethullah Gülen. The group works in 113 countries around the world, and is also helping in the burgeoning refugee crisis in Turkey.

METIN: I put myself into their place. I would be in the same situation. I would be the one who escaped from the war, from this conflict, and they came here, and you know Turkish hospitality. They came to our country and it is our duty to help them.

LAWTON: Here in the Southeastern city of Kilis, just on the border with Syria, officials say there are more than 100,000 Syrian refugees. That far outnumbers the local population. Kimse Yok Mu sponsors a refugee feeding program here that distributes 4,000 meals every day except Friday. People wait in line, sometimes for hours, to have their buckets filled with food for their families. Kimse Yok Mu volunteer director Mehmet Demir says many of the refugees had middle class lives in Syria, but are now forced to survive on charity.

MEHMET DEMIR, Kimse Yok Mu (through translator): There is definitely a need for food. “If we didn’t need it,” they tell us, “we wouldn’t be waiting here.”

GRISGRABER: About three quarters or more of the population in Turkey, of the Syrian refugees, are not in the camps at all. They’re what we call urban refugees, so they’re living in host communities, maybe they have friends and family who are helping take care of them, but many of them have to rent hotels or rent apartments. And if you don’t have money for that, you pitch a tent in a public park or you live in an abandoned building.

LAWTON: In addition to its feeding program, Kimse Yok Mu distributes boxes of food, blankets and other supplies to these urban refugees. This man, his wife and their small daughters live in one room of a house where five other refugee families have also rented rooms. They came to Kilis a year and a half ago. 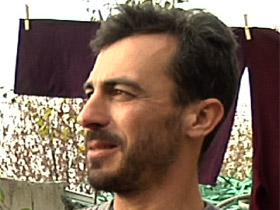 UNIDENTIFIED MAN (via translator): He said, you don’t know when the bombs will come to your house and kill you and kill your family so that was a problem for me, so I came from there to here.

LAWTON: Many of the refugees can’t find work. The demand for housing has driven up rent prices, so people are paying large amounts of money for small spaces that are ill prepared for winter. Sabah’s family, including her five children, live in this drafty shed, which floods every time it rains. Her husband can’t find a job. She says she doesn’t want to go back to Syria, even after the war is over. She says with all the bombing, there’s nothing to go back to. Hussein and his family came here last year after his home and business in Aleppo were destroyed by bombs. He has a job making office furniture, but says it’s not enough to support his eight family members, including baby Fatima, who was born six months ago in Turkey. Kimse Yok Mu has continued working with Syrian refugees despite recent political differences between the Turkish government and some of the group’s supporters. Many Kimse Yok Mu volunteers say they are motivated to help by their Islamic beliefs.

MEHMET KESMENOGLU, Kimse Yok Mu (through translator): This shows our religious side, as in the saying of the Prophet Muhammad: “He who sleeps on a full stomach while his neighbor is hungry is not one of us.”

LAWTON: While most urban refugees are in border areas, more and more are making their way to other parts of Turkey, especially to big cities like Istanbul. At the Roman Catholic Holy Spirit Cathedral, Spanish-born Salesian Father Andres Calleja Ruiz leads special programs for refugee children and youth from Syria, as well as a growing number whose families are fleeing ISIS persecution in Iraq. Because the children don’t speak Turkish, it’s difficult for them to attend local schools. 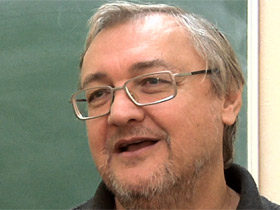 FATHER ANDRES CALLEJA RUIZ, Salesians of Don Bosco: We teach them English, of course, but also mathematics, geography and sports, music, dancing. To make them to feel that they are children like any other children. And to liberate themselves a little bit from their traumas. And above all to open their eyes and their heart to a future.

LAWTON: Most, but not all, of these children come from Christian families. Church leaders in Iraq and Syria are urging them to consider coming back to repopulate ancient Christian communities that have been decimated by the violence.

CALLEJA RUIZ: They are very much concerned because practically, Christianity is like bound to disappear in this region. And they are concerned because it was born here, Christianity. After two thousand years of Christian life with churches, with monasteries, with crosses everywhere, it seems that now, all of the sudden, this is becoming part of history.

LAWTON: Many of the refugee families stay in Istanbul only a short time before moving on. While they’re here, Father Andres says the mission of the church is to create an environment of love, where religious and ethnic affiliations don’t matter.

LAWTON: Although Turkey and the other neighboring countries initially welcomed the flood of refugees, the sustained crisis is taking its toll. In some areas, tensions have been rising between refugees and locals.

GRISGRABER: You can imagine having an extra million people puts a strain on local markets and the ability to get food, on the, on the employment market, the labor market, for example, on the water resources, on the sanitations systems, on the infrastructure, like roads, on hospitals. And so all of the host communities are definitely feeling the strain and have been asking for help for quite some time.

LAWTON: Donations to humanitarian groups haven’t been keeping pace with the needs. So far, Turkey has limited the number of permits to international nongovernmental aid organizations that are working with refugees in other countries, preferring to handle the crisis internally. That may have to change, as there’s no sign of things letting up anytime soon, for Turkey or any of the host countries. Grisgraber says the international community needs to work harder for peace.

LAWTON: In the meantime, despite the challenges, many say there is a moral imperative to keep trying to help. I’m Kim Lawton on the border between Turkey and Syria.

Almost half the population of Syria has been displaced by the violent conflict between the government, rebels, and ISIS. Nearly 1.6 million Syrians have fled to Turkey, and they rely on support for their basic needs from the government and civilian volunteers, many of them motivated by their Muslim faith. Kimse Yok Mu is one Turkish nongovernmental aid organization that sponsors a refugee feeding program near the Turkish-Syrian border.