LUCKY SEVERSON, correspondent: About a billion Muslims around the world answer the call to prayer each day. So when Duke University, founded by Methodists and Quakers, announced that it would broadcast the call once each Friday from its Gothic church bell tower, it was hailed as a positive step toward religious and cultural diversity. This is a Duke PR video:

IMAM ADEEL ZEB (Muslim Chaplain, Duke University): Duke has provided the Muslim community with the Muslim life that is far more comprehensive than many other universities in the entire U.S.

SEVERSON: Then Duke, in a turnabout, cancelled its plan. That was one in a series of episodes at three North Carolina universities that has caused Muslims in the region to be fearful of an upsurge of Islamophobia. Imam Khalid Griggs is the Muslim chaplain at Wake Forest University: 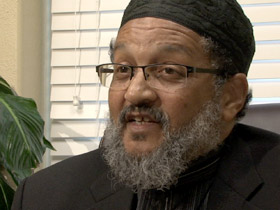 IMAM KHALID GRIGGS (Muslim Chaplain, Wake Forest University): You know, actually this is the worst period for Islamophobia since 2001. This is a very cancerous formation that is rooted in racism and bigotry, anti-immigration feelings, and it’s so un-American.

SEVERSON: And then there are those like Donald Woodsmall, a Wake Forest-educated lawyer and businessman who is worried about what he thinks is the true intention of some Muslims living in the U.S.

DONALD WOODSMALL: Let’s say I get an email from someone, and they say, “You’re a bigot.” I simply say, “All I’m doing is repeating facts.” That’s all I’m doing, I’m just like the little boy who’s saying the king doesn’t have any clothes on.

SEVERSON: Woodsmall says the “king” in this case is Imam Griggs and his belief in Sharia law and personal jihad, which is why Woodsmall emailed 24,000 Wake Forest alumni asking them to withhold donations to the university.

WOODSMALL: And what I’m asking for is a debate on sharia and whether it’s compatible with American constitutional principles. That’s my goal.

SEVERSON: Michaelle Browers was one of the first supporters of the imam. She’s an associate professor of political and international affairs at Wake Forest. 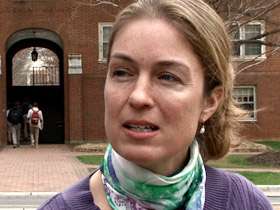 PROFESSOR MICHAELLE BROWERS (Wake Forest University): And it wasn’t until someone left a bucket of urine outside his door that we realized that it had gone up from verbal harassment, fabrications told about Imam Griggs, to actually physically harassing him.

SEVERSON: And then the president of Wake Forest, Nathan Hatch, took a stand firmly behind Imam Griggs and against Donald Woodsmall’s demand.

PRESIDENT NATHAN HATCH (Wake Forest University): He has offered a frontal attack against Imam Griggs and his associations and what he believes, and Imam Griggs doesn’t stand for that. I mean he has been in this community for 30 years. We know that he is a man of peace. We know the influence, the positive influence he has in his mosque and on students, so we just think those criticisms are deeply unfair.

WOODSMALL: When Charlie Hebdo happened in Paris, that same week 2,000 women and children were killed in Nigeria by Islamic fundamentalists, and then I asked him, how many people have to die around the world at the hands of sharia supremacists before you would feel comfortable debating this subject on the Wake Forest campus?

SEVERSON: Imam Griggs says he does support sharia law, as do all practicing Muslims in one form or another, depending on the culture and country. 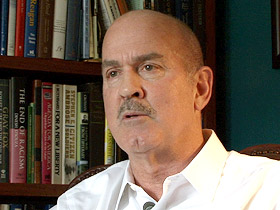 SEVERSON: Woodsmall’s biggest complaint about the imam and sharia law is the meaning of “jihad.”

WOODSMALL: You don’t have to dig very deep before you understand what jihad is, and I think America wakes up, has woken up and understands what jihad is.

SEVERSON: To Woodsmall and many Americans, jihad has a very violent connotation, associated with terrorist groups like al Qaeda and ISIS. The beheadings by ISIS in particular have had a dramatic effect on the American psyche. Safyah Usmani has a very different view. She is a Pakistani master’s student in documentary at Wake Forest, a Fulbright Scholar and a Muslim. Her latest film is about the term “jihad.”

SAFYAH USMANI: The idea is to educate the people about the real meaning behind jihad...

USMANI: It is to struggle. It is to look within and struggle to make your life better, and I feel like I really need to do this. It’s my attempt to sort of reclaim the word “jihad.” 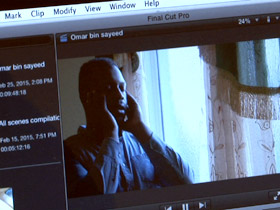 SEVERSON: The film features a Muslim student who embarks on two jihads. One is to educate the community about Islam.

USMANI: And then he’s having his personal jihad, and he was so inspired that two weeks ago he had a baby boy, and he named him Kareem Jihad.

IMAM GRIGGS: The term itself is taken from the root “jihada.” It simply means “struggle.” There are different forms of struggle. In the United States and around the world, particularly in the English-speaking world, jihad has been mistranslated as “holy war.”

WOODSMALL: He has a place of recruitment, he has a position of authority and a lot of influence to recruit more, you know, I’ll call them confused students.

SEVERSON: Safyah says she is definitely not confused.

USMANI: The note that we are ending the film on is that it’s not just my jihad or just your jihad alone, but as a society, a collective jihad to make this world a much healthier, happier, and safer place for our kids to come. 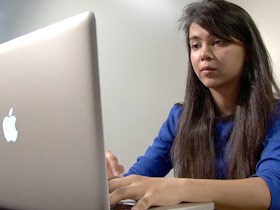 SEVERSON: There was another incident that amplified the fear of Muslims that they are increasingly the target of Islamophobia—this one in February, when three Muslim students at the University of North Carolina in Chapel Hill were shot to death apparently, police say, over a parking place.

Father of victim: "Tell me how my son is. What is the situation? If he is dead, tell me he is dead."

SEVERSON: But the husband’s sister and father are convinced it was a hate crime.

DR. SUZANNE BARAKET: Six weeks ago, I cried tears of joy at my baby brother’s wedding. Today we are crying tears of unimaginable pain over the execution-style murders of my brother Deah, his bride Yusor, and her younger sister and best friend, Razan.

MOHAMMED ABU-SALHA: Each one of these children had a bullet in the head. This was an execution style. This was a hate crime from a neighbor.

SEVERSON (speaking to mayor of Chapel Hill): Do you think it was all about parking spaces?

MAYOR MARK KLEINSCHMIDT (Chapel Hill, North Carolina): No, I don’t believe it was all about parking spaces. 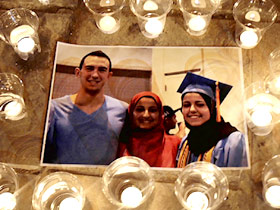 MAYOR KLEINSCHMIDT: I think what we have here is someone who was engaging with people who were different than him, and it was easier perhaps to respond in a violent way than it would have been with other people.

SEVERSON: According to his wife, the suspect, Craig Stephen Hicks, wasn’t targeting Muslims. She said he railed against all religions. The family believes it was a hate crime and that it was because the two sisters were wearing hijabs—head scarves. The federal and local investigation into the shooting is ongoing, but Mayor Kleinschmidt says Muslims in the area are afraid that it was a hate crime.

MAYOR KLEINSCHMIDT: We have folks who worship here in Chapel Hill who refrain from publicizing and making it known where they worship, when they come together. They tell me it’s because they have concerns about their safety.

SEVERSON: At Duke, when the announcement about the call to prayer from the church bell tower was suddenly cancelled, Duke PR explained it this way:

Duke PR web video: Initially the call to prayer was to occur from the top of the chapel. That announcement generated questions and concerns from the Duke community. That led the university to rethink its original plan.

SEVERSON: What the PR film doesn’t mention is that the cancellation came one day after the Reverend Franklin Graham posted this on his Facebook page. It said in part: “As Christianity is being excluded from the public square and followers of Islam are raping, butchering, and beheading Christians, Jews, and anyone who doesn’t submit to their sharia Islamic law, Duke is promoting this in the name of religious pluralism.”

SEVERSON: Duke discouraged professors and staff from speaking with us, saying that the university wants to move on. But Franklin Graham’s post has contributed to the worries of Muslims in this country. Many think his sentiments are becoming more common and leading to increased discrimination and hostility against a people who themselves have been the primary victims of terrorism.

Three North Carolina universities—Duke, Wake Forest, and UNC-Chapel Hill—have experienced sharp divisions and increased tensions over Islamic teachings and the role of Islam in the US. For Muslims in those communities, there are signs of growing anti-Muslim hostility which in some cases has moved beyond angry rhetoric to actual physical violence, such as in the recent murder of three Muslim students in Chapel Hill.