JUDY VALENTE, correspondent: The musical tastes of most twenty-somethings trend along these lines: Beyonce, Maroon 5, and hip hop artist Mark Ronson. But for 28-year-old tenor Gene Stenger there are no song lyrics or musical beats that compare with a Handel oratorio.

GENE STENGER (Student, Yale Institute of Sacred Music): The harmonies are gorgeous, and the melodies are incredible to sing, and I think even the context, the historical context of it is also what interests me.

VALENTE: This is Yale’s Institute of Sacred Music, a place dedicated to turning out the next generation of liturgical composers, choristers, conductors, and organists. 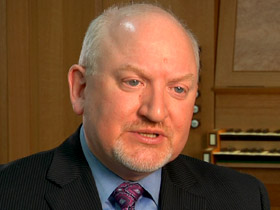 THOMAS TROEGER (Professor of English and Theology, Yale Institute of Sacred Music): There was an idea very popular a few decades ago where people thought we’ve got to extract the religion so that we just have the art, but in recent years, more and more scholars have become very interested in and realizing, wait a minute, that’s a kind of distortion in that you have no idea of the real depth if you take out the theology. 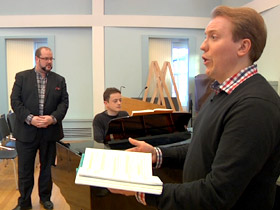 VALENTE: Gene Stenger considers his singing a calling—a way to inspire a sense of the divine in audiences. By the age of 21, Stenger had already performed as a soloist Bach’s Magnificat and St. Matthew Passion and Handel’s Messiah.

STENGER: Any time that I’m performing Handel’s Messiah I feel a very strong spiritual connection, and for me, it’s almost like a form of prayer. To be able to incorporate my passion of music into that is something very special.

VALENTE: Five days a week, class work stops at 10:30 in the morning, and at Yale’s Marquand Chapel, the community gathers for sung morning prayer led by the institute’s students.

MAGGI DAWN (Dean of Marquand Chapel): There is something about the experience of a big group of people singing together and really singing from the bottom of their hearts, and it does something to you that lifts us out of the sort of intellectual pursuits that we do all day long. 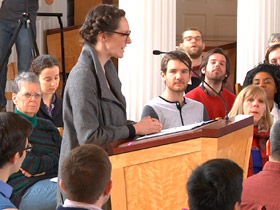 VALENTE: The prayer service offers a variety of sacred music styles. It also showcases the talents of both faculty and students, like Kenyon Adams, who writes and performs his own gospel hymns.

DAWN: I say to them, I’d like you to bring the thing that you do, and we will work the chapel around what you have to bring.

VALENTE: The student body represents a variety of religious traditions, a point of pride for the institute.

JEAN: We admit with an eye toward diversity. We want our students to look different from each other, and that immediately suggests that they’re going to think differently.

VALENTE: Twenty-seven-year-old Edmund Milly was raised Presbyterian and sometimes felt uncomfortable being in other churches until music became a bridge.

EDMUND MILLY (Student, Yale Institute of Sacred Music): That tension becomes less and less relevant to my life as it goes on. We are all there to do the same thing, which is to render this piece of music in the most beautiful and the most affecting way for everyone who is present. 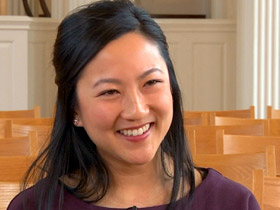 MINDY CHU (Student, Yale Institute of Sacred Music): My Mom is Buddhist, and I actually grew up going to temple. I really like a lot of values in Christianity, too, so I’d say I’m one of those "figuring it out" people.

VALENTE: A major part of the course work is to give students real-world performance experience, like this Sunday evening concert at New York’s famous Saint Bartholomew Church. On the program is Handel’s eighteenth-century oratorio “Judas Maccabeaus,” under the direction of the internationally known conductor David Hill.

JEAN: David Hill is genetically engineered to work at the Yale Institute of Sacred Music. David knows the liturgy like the back of his hands, knows Scripture, knows the psalms, knows the tradition, but he also has the musical skills to teach our very talented music students to be the very best artists they can be.

VALENTE: For the students, the performances often prove to be powerful experiences artistically and spiritually.

STENGER: I really try to think about the character that I’m portraying and the text and what are the important words to bring out and put myself in that mindset of how this character is feeling. 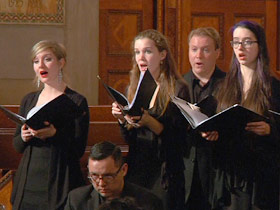 CHU: There was this feeling about singing to a group of people and having music serve as an immediate spiritual function. It’s that connection you have as a singer in sacred music to service to others that’s unlike any other kind of service.

JEAN: The performance opportunities that we give our students are primary laboratories for their learning. Not only do they have to in a sense bury themselves in a practice room to get really good at their skills, they have to share that with the public.

VALENTE: There is also the question about what these students will do with all of this training once they’ve graduated. But don’t even try to suggest to first-year graduate student Jacob Street that his specialty, the organ, doesn’t offer much of a musical future.

JACOB STREET (Student, Yale Institute of Sacred Music): A friend recently compared it to the Wizard of Oz—that you’re seeing, you’re hearing all this sound and fury but you’re not actually seeing it all happen. There’s an incredible palette of colors available to the organist, an incredible array, and it’s different with every single instrument.” 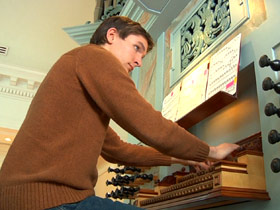 VALENTE: Street, who is 27, currently plays organ for a 60-member choir at a nearby Episcopal church. He knows that job may not last, but he loves the organ and the music written for it, so he refuses to get discouraged.

STREET: I don’t expect to find the perfect job right away. I also don’t know that I’ll be doing any one thing as a full-time job, so I’m very much prepared for doing a lot of different things, to sort of cobble together a lifestyle, and I think that’s part of the fun, actually, of being a musician.

CHU: Being a part of this movement of where classical music’s going, how are we going to change it or alter it to deliver it to contemporary audiences? I’d love to be part of that movement.

VALENTE: Gene Stenger also wants to pursue a career as a soloist. But he says he mainly wants to show audiences that the arts are not merely a means to entertain. They can be a pathway to the sacred, a vital source of spiritual strength and comfort—music especially.

We take viewers to New Haven and New York to hear students and instructors speak artistically and spiritually about the power of experiencing sacred music. Many students who devote themselves to studying religious music and theology at the more-than-40-year-old Yale Institute of Sacred Music feel it deepens their spiritual lives and connects them to a tradition they hope to pass along and make relevant for contemporary audiences. Says institute director Martin Jean: “We exist to integrate theological education and musical education with artistic education.” Institute students study music, art history, the Bible, Christian theology, literature, poetry, architecture, and liturgy—all at the same time.