JOSHUA SALAAM (Native Deen): At times when the Muslims are coming together during the month of Ramadan or Eid celebrations or things like that, we have something that is a service to the community.

ABDUL-MALIK AHMAD (Native Deen): We got a lot of calls for gigs, especially around the world.

NAEEM MUHAMMAD (Native Deen): You go to places like Malaysia, Indonesia, Turkey, and stuff like that where we perform, or even in Egypt, they have big events surrounding this type of devotional music, because they feel it's a part of the whole thing.

AHMAD: Sometimes it conflicts because we want to have time with our families, we want to be connected to our communities.

MUHAMMAD: You have to do things maybe on off-hours that other people wouldn't. You may have to do your things early in the morning or after the shows and after everything is done on a personal level. 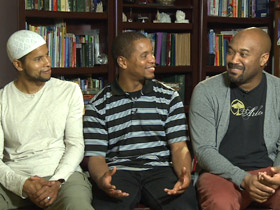 SALAAM: We view it as this is all God's work. Sometimes we want to do this, sometimes we need to do that. But that's one of the ways we deal with it — there's a real purpose and a real need to what we're doing.

MUHAMMAD: They say that from the tradition of the Prophet, that being in service to others, like when you're serving others and looking after others, would be better than spending the last ten nights during Ramadan — they call that itikaf— in the mosque, with the Prophet himself.

AHMAD: During the month of Ramadan, whatever we do we're told that we get ten times the blessing. God is saying, what do you want? I'm here to give you want you want, if it's ok, don't ask crazy stuff like...

AHMAD: I don't know, like a dinosaur to just come alive.

SALAAM: All my interactions with people of other faiths who are not Muslim, when they find out we're in a Muslim band, when they find out we're fasting, it's like the greatest thing like 'For real? Really, are you all Muslim? Tell me about that.' It's like some of them have never heard of this. 'You fast all day?' They want to have a conversation, it becomes engaging. 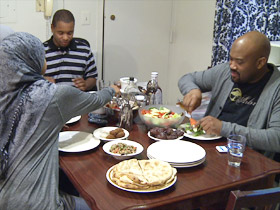 MUHAMMAD: Most people think it's a hunger strike. They don't realize that we start with a meal in the morning, and then we have a meal at night. It's tough, definitely. Most people focus on that when they think of the fasting, the only thing they can think about is, 'so you're not eating anything now?'

SALAAM: That's kind of what I think about. I'm with some super Muslims over here!

MUHAMMAD: We grew up here in the states so when we're fasting here it's just the small pocket of the Muslim community that's fasting, so there's still everything going on. Whereas one time when we went to Turkey during Ramadan and we wanted to, at least me and Abdul-Malik wanted to experience how it felt to fast in a society that's doing it with you.

SALAAM (to MUHAMMAD): How did that go for you?

MUHAMMAD: That went well for us because me and Abdul-Malik did, but Joshua took the advantage of not fasting. 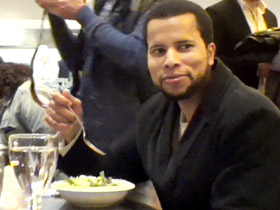 SALAAM: People of faith in general, when you're around your own people and you're doing something, and you don't have time to give an excuse, you get those eyes looking at you. If you are traveling, you don't have to fast when you're traveling, and then you might be eating and then somebody might, 'Hey, is that guy from Native Deen? I saw him eating during Ramadan.' So you have to kind of be more aware. Those are things we didn't really deal with when you're just local.

MUHAMMAD: On the return flight, he got us back because we're fasting going against the sun.

SALAAM: No, you're fasting with the sun.

MUHAMMAD: Oh I'm sorry, we're fasting with the sun. So the sun's not setting for us.

MUHAMMAD: That's like a twenty, twenty plus hour fast, which is unreal. So he's on the plane, eating, drinking everything that he can.

SALAAM: And their eyes are rolled up in their head. 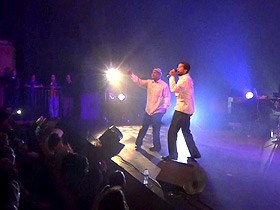 AHMAD: All of the experiences that I have during Ramadan when we're on tour fasting have always been a blessing. There's so many people I feel that would wish that they had the opportunity to be able to perform. To do what they like to do—their art—basically hip hop is our art and to be able to do that in front of an audience and to be able to go around the world doing it. So during the month of Ramadan, I feel that it's my time to say thank you to God, basically, for all these opportunities.

MUHAMMAD: We were in Egypt. When it was time to break fast, they would set up a tent and they would have this long stretch of a table that could go for a city block. Being able to tour in these moments, we get a perspective that many people don't get. We get a perspective to say, “Ok I've experienced it here in Egypt, I've experienced it in Turkey.” They light a cannon, and a cannon goes off, and I'm like 'what?' And then the guy is like “Oh no don't get worried, don't get nervous.' He said “Don't worry, it's just time to break fast.” When we were little we used to just listen to the phone until the time. We would call the time on the phone and listen until that minute and then he says “It's 8:59,” it's like, “Oh yeah it's time!” And then we go break.

We got to pray in Jerusalem, on the first of the last ten nights on one of our last times there, in Ramadan. That was special.

During the holy month of Ramadan, Muslims who are able are expected to fast from sun up to sun down. This can pose special challenges for Muslims in many professions. We talk with members of the Muslim hip-hop group Native Deen about how they observe Ramadan’s strict requirements while on musical tours.