FRED DE SAM LAZARO, correspondent: The Jamia Islamia Clifton madrasa was founded 40 years ago by Mufti Abu Huraira's father—building, he says, on a tradition that goes back 1,400 years.

MUFTI ABU HURAIRA: Madrasas were established and came about right at the onset of Islam. The Prophet established the madrasa and they have played a very significant role in the spread of Islam. 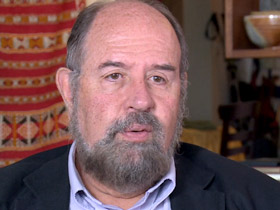 PROF. WILLIAM BEEMAN (University of Minnesota): From medieval time down to almost the current modern period, madrasas in Islamic society was the principle source of education for young people. And they would learn Arabic, of course, in order to be able to read the Quran and say their prayers, but they would also be instructed in mathematics or in literature. In Iran, they might be instructed in traditional classic poetry. That was true also in Arab world.

DE SAM LAZARO: It was also true in India, ruled for centuries by the Muslim Mughal empire. But during the British rule that followed, madrasas retreated to a narrower, Quran-based curriculum and by the late 1800s, Beeman says, they started to become politicized, as they joined the opposition to British rule.

DE SAM LAZARO: The Islamic Republic of Pakistan, created from the partition of India at independence, would be dogged by conflict for decades to follow—directly with India and indirectly from neighboring Afghanistan.

Some madrasas became embroiled in the turmoil, far removed from the original mission, says Abu Huraira. 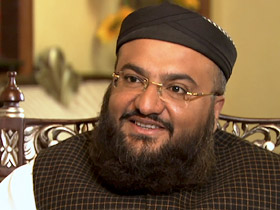 ABU HURAIRA: The role of the madrasa is for the spread of education, to bring about betterment in a person's morals, and a society that is harmonious and peaceful. And one of the first people to raise a voice openly against a deviation from the purely educational aspects was my father.

DE SAM LAZARO: But some madrasas became not just politicized but radicalized, and experts say they proliferated—by some estimates there are as many as 22,000 across Pakistan today—due to many factors.

The madrasa was an alternative to a failing, even absent public school, and poverty. Madrasas provide free food and shelter, though the curriculum, in many cases just rote memorization of Islam's holy book, gave graduates few job skills, says Beeman.

PROF. BEEMAN: They’d even memorize sometimes the whole Quran and not really understand a single sentence of what they were, of what they had learned. And so it was very easy for people to be influenced by interpretations, by extremist interpretations of Koranic verse.

DE SAM LAZARO: Those came primarily from militant Salafism, a conservative Islam prevalent in Saudi Arabia and the Arab Gulf states. Its missionaries were veterans from the Afghan conflict.

PROF. BEEMAN: They really set up shop in what they thought was an area that would be fertile for their kind of message. The rather traditional madrasas became radicalized through the Salafi movement and new madrasas sprung up which also indoctrinated young people in this rather violent movement in Islam and the resistance they had advocated against the West and against other Muslims who didn’t agree with them. 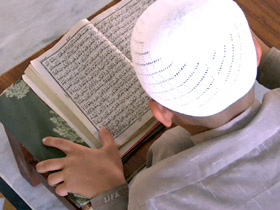 The Quran remains at the core of the curriculum for all 1,500 students spread across six campuses, including two exclusively female ones. We asked but were not permitted to film there during our visit.

HASAN ALI (Student): The first thing in the morning, we learn the Quran sharif. Then after that we learn the regular school subjects, like math and English and computers. And then in the afternoon we are taught how to behave with parents, and other members in society, and how to treat children, and old people—basically the code of a good life.

DE SAM LAZARO: Madrasa leaders say a big part of that is tolerance, critical in a land that regularly sees violence among Islamic sects and church burnings. About two percent of Pakistanis are Christian. Officials here say enrollment is open to all Islamic sects, though the founders and most students are from the Deobandi brand of Sunni Islam. 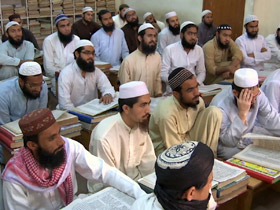 DE SAM LAZARO: The madrasa leaders say their alums have gone not just into clerical but also secular occupations—one reason why students are taught English in addition to Arabic.

DE SAM LAZARO: Jamia Islamia says it is funded entirely by the tithes required of all Muslims. But even as it boasts strong support among Pakistan's faithful, there is sectarian unrest as well, and that presents a constant threat.

HURAIRA: We have a lot a friends who do not like our work. There is so much opposition to what we are pursuing at Jamia Islamia on a daily basis. There are threats to my life. I know that. There's threat to whatever we do here at Jamia Islamia. But for me, it is a mission.

DE SAM LAZARO: A mission to bring an institution into the modern world by taking it back to its ancient traditions that went well beyond the holy book.

For Religion & Ethics NewsWeekly, this is Fred de Sam Lazaro in Karachi, Pakistan.

In recent years, traditional Islamic seminaries, or madrasas, have come under scrutiny and criticism as incubators of terrorism and extremist interpretations of Islam. Correspondent Fred de Sam Lazaro has a report on one school, the Jamia Islamia Clifton madrasa founded 40 years ago in Pakistan’s largest city, Karachi, that is trying to change that image and broaden the scope of what students are taught.