BOB FAW, correspondent: As the glorious sound reverberates though this mini-cathedral, New York City’s Grace Church, these singers know there is more happening here than the artful blending of voices and composition. Just ask Stacy Horn, who says “when I’m singing, I become suspended in a world where everything bad is bearable, and everything good is possible.”

FAW: Attorney John Maclay, who directs this 150-voice choir of volunteers, says singing like this is deeply satisfying. 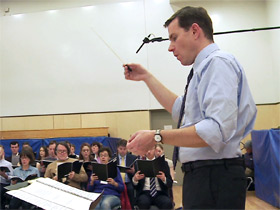 JOHN MACLAY (Music Director, The Choral Society): It really is something that answers a deep-seated need in the soul to be part of something that’s greater than what you can individually can achieve. You both sort of lose yourself and find yourself at the same time in this type of an activity. You are actually using your body to breathe life into the composer’s creation, and that kind of organic experience I think really feeds your soul in a way that your daily life really can’t.

FAW: At home, Stacy practices almost every day. The vocal drills pay off in rehearsal every Tuesday night, where Stacy’s been showing up faithfully since 1982.

HORN: Choir rehearsal is a place where you go to heal. It never fails to make me feel better, so in terrible times I’m not going to avoid it, I’m going to run to it.

MACLAY: Good, and stop. Good. I feel like you're thinking too hard.

FAW: ...coaxing, cajoling, complimenting. Always getting the best out of his singers. 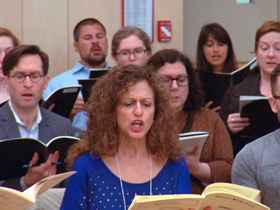 MACLAY: What we do a lot of in rehearsal is that sort of balancing act between the voice types and, frankly, between the different personalities in the group. And it all sort of—creating that unity out of diversity, I think, is the task of making music.

HORN: The pieces that we sing are works of art, that they’re masterpieces, and our voices, our bodies are the instruments that convey those masterpieces. So when I sing, and this is literally not figuratively, that resonance is moving through my body, head to toe.

FAW: What is happening here is more than musical. As they sing, their bodies are literally changed, with the brain producing endorphins which increase pleasure and decrease stress and anxiety. It is engaging and relaxing, says choir member Darren Walker.

DARREN WALKER: There’s a meditative element to it, and the fact that you are giving, and you have responsibility to be somebody who’s contributing a specific line to this group activity—it really focuses you, so that brings about some relaxation.

WALKER: In order to have an engaged sound, it requires a lot of the body. It’s not a passive experience at all. For soft singing especially, but even for loud singing, yeah, that is in essence a controlled scream, a beautiful one, but nevertheless you’re unleashing everything from within.

FAW: In her book, Imperfect Harmony, Horn describes all the joys of group singing which Belmont finds are both physical and mental. 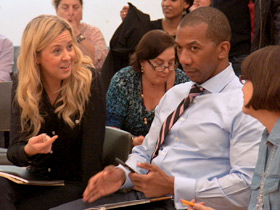 BELMONT: The thing that I was not expecting was discipline and the accountability you have on yourself to make yourself ready to come to rehearsal and not let the other people down.

FAW: And there’s another big benefit in singing in a group like this, namely, the group itself.

HORN: You can’t sing a masterpiece like the Brahms Requiem alone. You have to learn how to put your ego aside and work together with all the voices around you in utter, complete, and equal cooperation. Once you experience the bliss that comes from that kind of cooperation, you are highly motivated to continue.

MACLAY: To me the choir is really a microcosm of what a community ought to be. People are not worried about status within their social position or their family hierarchy. What they are worried about is all together singing D major.

FAW: While this choral society attempts to master and perform only the most difficult choral works, many of them sacred, choir members are not necessarily religious. 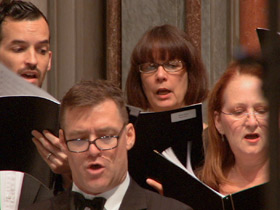 HORN: I can’t help but feel grateful that religion has inspired and nurtured these works of art that have had such a profound effect on my life, regardless of what I believe. The fact that people, regardless of their beliefs, can be comforted by this music—it makes religion in this form a great ambassador. It brings people together rather than pulling them apart.

WALKER: I think it provides a spiritual need, especially for those who don’t necessarily go to services on a regular basis. Yeah, and I think that’s a very important thing to have, something where you’re able to think about forces in life that are greater than you.

FAW: Can you find happiness only when singing in a group? No, says Maclay but it certainly makes it more meaningful.

MACLAY: The simple quality of singing a folksong or singing a song that you’ve heard on the radio—it does that job of kind of releasing the endorphins and making you feel happy. What I think choral singing does on top of that is to add the layer of being the co-creator of a masterpiece and actually serving the other people that you’re singing with as well as you’re serving the music.

FAW: Ultimately all the hard work, the discipline, and sense of community come together in one magnificent sound when the individual benefits are multiplied and why some call group singing the perfect drug: cheaper than therapy, healthier than drinking, and more fun than working out.

Volunteers in the Choral Society at New York’s Grace Church say that choral singing feeds the soul, brings joy, and creates community. “To me, the choir is really a microcosm of what a community ought to be. People are not worried about status within their social position or their family hierarchy. What they are worried about is all together singing D major,” says music director John Maclay.

Read an excerpt from Imperfect Harmony: Finding Happiness Singing with Others by Stacy Horn, who sings in the Choral Society: 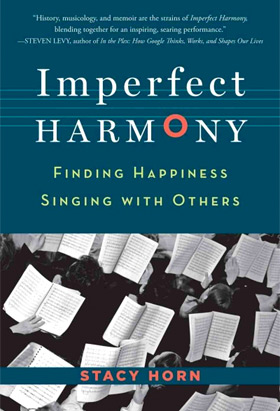 “I believe that all the arts, and especially music, are necessary to a full life,” Ralph Vaughn Williams said. Music will show you what to do with your life.” I’ll take it even further. Music, this choir, in some ways is my life. We all need a way off the couch or the floor; a way to embrace the fall or whatever else life brings. When I joined the choir I was only looking to soothe a broken heart. Instead I found something that invariably transcends every misfortune I’ve faced and makes me happy. Every week, music dependably and effectively silences my roulette wheel of worry and self-doubt, and that is not a small thing. Nor is it the only thing.

“When I think about who my closest friends are,” my fellow soprano Lucia Rivieccio told me, “they are all people I’ve met in choir or met through people in choir…just the opportunity to meet so many different kinds of people. It can be a bit of a ragtag group, some people can be really annoying, others I don’t know very well but like very much, and some I just adore. But I wouldn’t want to lose even one.”

“Ordinary human beings can do extraordinary things,” [Choral Society of Grace Church conductor John Maclay] once e-mailed us. “Belief is necessary—not in any one creed or religion, or in religion at all—but belief in yourself and in each other.”

I believe. I believe in singing. Like [musician and composer] Brian Eno, I believe in singing with other people. I know it won’t last forever. “There are people joining the choir now who were born when we first joined,” Barbara pointed out to me once. One by one we will all be replaced. But I hope that like Frits Menschaar, the bass in our choir who was singing right up until the week he died, I will be able to continue singing until the very end. “How long do you plan to sing with this or other choral groups,” I asked the people in my choir. Nancy Tepper’s simple answer summed it up best. “As long as I can.”