BOB ABERNETHY, host: Kentucky county clerk Kim Davis was released after spending six days in jail for refusing to issue marriage licenses to same-sex couples because, she says, that would violate her Christian beliefs. She was ordered not to interfere with the efforts of her deputy clerks to issue the licenses. Davis thanked her supporters at a rally in her honor just outside the detention center where she had been held: 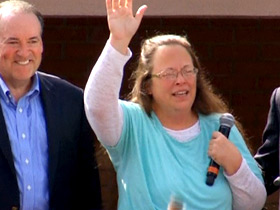 Kim Davis: “I just want to give God the glory. His people have rallied, and you are such a strong people.”

The Kentucky case has raised many issues, among them whether appealing to religious freedom can override a person’s duty to obey the Constitution. Roger Severino is a lawyer and director of the Heritage Foundation’s DeVos Center for Religion and Civil Society. Barry Lynn is an ordained UCC minister and executive director of Americans United for Separation of Church and State. Welcome to you both.

ABERNETHY: Barry, do I have the right to break the law in order to obey what I say is God’s law?

LYNN: If you are seeking a job as an elected official, and you know full well what the duties and the responsibilities of that office hold, then I don’t think in our legal system you can possibly be permitted to opt out of the performance of those duties by claiming that one duty violates your conscience. There are extraordinary circumstances under which people may be able to break the law and claim higher authority, but being an elected official is not one of them. 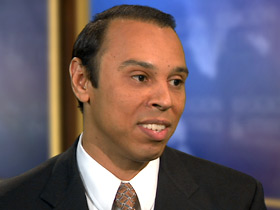 SEVERINO: Well, I think Barry is wrong about the law. The law actually requires religious accommodation where it’s reasonable. It’s part of our traditions, it’s part of our history, and it’s part of our law, specifically in Kentucky. In Kentucky, you can opt out of issuing fishing and gaming licenses if you’re a vegetarian. If you have a moral conviction there, you’re respected. So why not respect the moral convictions of Ms. Davis here and provide an opt-out? All she’s asking for is to keep her name and her title off the license. And the licenses could go out to same-sex couples. And I think it’s a possible solution that should be pursued, and she should not have been thrown in jail. That was unnecessary and wrong.

LYNN: Yeah, of course she chose to go to jail so far for six days, and the difference is there’s no constitutional guarantee that you can fish or that you can hunt. But in the case of Kim Davis, what she’s refusing to do is sign a paper or even allow her name to be printed on a form and have someone else sign it, that involves what the Supreme Court in June called a fundamental right: the constitutional right to choose whom you’re going to marry. So this is a much bigger deal and a much greater insult to the dignity of human beings than saying, “Sorry, I won’t give you a fishing license.”

SEVERINO: North Carolina had a solution. They opted out clerks from the entire process. So people who were willing to issue licenses were issuing them to same-sex couples. Same-sex couples are receiving licenses in Kentucky as we speak. Kim Davis’s name is no longer on them. Now her title is the last thing that’s left. So take off the title, and everybody wins. Why not pursue that option?

ABERNETHY: Are you expecting to see a lot more cases like this around the country? I mean, politics was part of what was going on in Kentucky, wasn’t it? And would you, through this campaign, would you see more attempts to unite these two things?

SEVERINO: Well, this is a result of the Supreme Court’s redefinition of marriage and imposing that on the entire country. Seventy-five percent of Kentuckians voted to preserve marriage as the union of one man and one woman. So these conflicts are going to naturally arise when the Supreme Court takes such a radical step. So we’re going to see these… 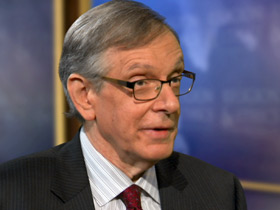 ABERNETHY: But they will also arise because some politicians find it useful, don’t they, Barry?

LYNN: No, they certainly do. We saw just this week two presidential candidates from the Republican Party with Kim Davis at a rally when she was released from her brief time in jail, and I think that everybody is so shocked in the Republican Party that even evangelicals are looking like, at this moment, they are overwhelmingly supporting Donald Trump. When you do that at this stage in the campaign, others who seek evangelical votes, particularly in a place like Iowa, have nothing to do except latch on to the hottest human being, the biggest topic, and that turns out to be Kim Davis.

ABERNETHY: So Roger, just once again, and very clearly, how do we get through this then, in city after city after city, so the same thing doesn’t happen?

SEVERINO: Sure. So we’re moving away from a “live and let live” society to a “winner take all” society, and that’s a mistake. There are ways to compromise. With Kim Davis, she could be allowed to opt out of the process completely. With the bakers and the florists and photographers in other states, they’re providing services, and they want to opt out of participating in same-sex ceremonies. When people can find the services elsewhere, then everybody could be happy. So we could all live and let live, and that’s the society I think we should be aiming for.

ABERNETHY: Many thanks to both of you. To Barry Lynn of Americans United for Separation of Church and State, and to Roger Severino of the Heritage Foundation.

The high-profile case of Kim Davis, the Kentucky county clerk who refused to issue a marriage license certificate to a same-sex couple, has raised questions about law, conscience, and religious liberty. Can exercising religious freedom trump obeying the law? Barry Lynn, executive director of Americans United for Separation of Church and State and Roger Severino, director of the DeVos Center for Religion and Civil Society at the Heritage Foundation, discuss the Kentucky case with host Bob Abernethy.