KIM LAWTON, correspondent: For centuries, the US Episcopal Church has been considered a bastion of American mainline Protestantism. Its new leader, Bishop Michael Curry, is pushing the church to move beyond its institutional confines.

BISHOP MICHAEL CURRY: Jesus of Nazareth really didn’t found an institution. He started a movement. I see us reengaging that movement and living it out, as the Episcopal Church, as a part of that Jesus movement.

LAWTON: Curry was elected the church’s 27th presiding bishop at the denomination’s general convention this summer. He is the first African American to hold the position.

CURRY (in speech): This is the church where I was baptized as a baby.

LAWTON: Curry succeeds Bishop Katharine Jefferts Schori, the first woman to lead the denomination. He says he doesn’t believe either was elected solely on the basis of race or gender. 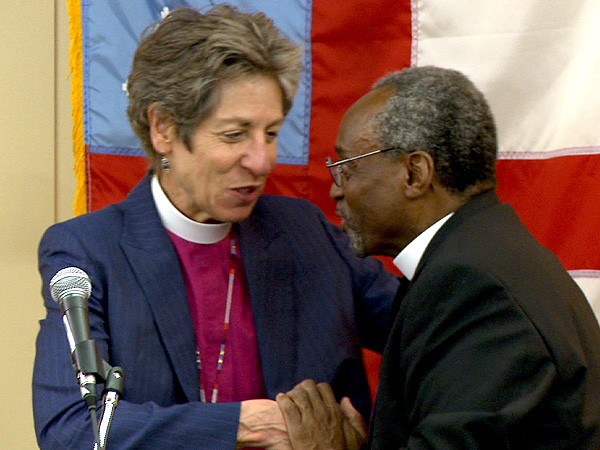 CURRY: Her voice was the voice our church needed at that particular mission moment in its life. That she was a woman was good. But that was an add-on. That wasn't what drove it. It was that she was the right voice. She was the leader we needed. I think that was true with me as well.

LAWTON: Many early Episcopalians were slave owners, and in recent years, the church has apologized for its complicity with slavery, segregation, and racism. Curry says his election is a sign of how far the church has moved.

CURRY: We are learning to begin to look at people for who they are and what they bring, not simply by the color of their skin or their gender or their sexual orientation or their socio-economic background. That we're actually beginning to go deeper, that's an important step, and I think that's significant. It really is significant. But there's more work to do.

LAWTON: Delegates to the church’s convention identified racial reconciliation and evangelism as two critical priorities for the next several years. Curry says one of his biggest challenges may be winning over Episcopalians who are uncomfortable with the idea of evangelizing others.

CURRY: We Episcopalians are very gentle. We are ladies and gentlemen. And I'm not talking about an evangelism that's not us. Evangelism is about helping somebody find their way to God. I think it would be pretty cool if the Episcopal Church was known for that. 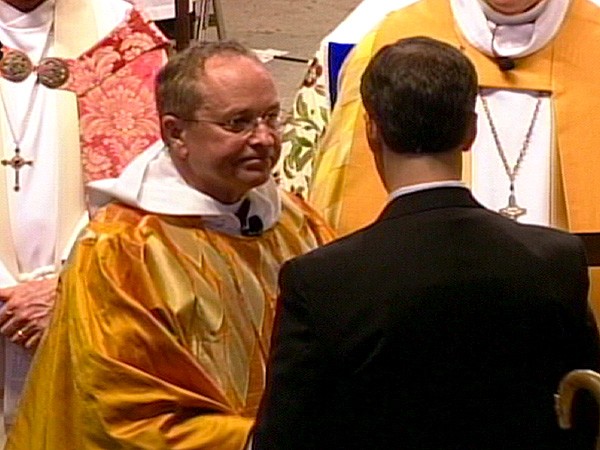 LAWTON: In the last decade, the Episcopal Church has lost about 20 percent of its membership, which now stands at under 2 million members. Part of that decline was generated by the controversy that has roiled the denomination since the 2003 election of Bishop Gene Robinson, the church’s first openly gay bishop. Some theologically conservative congregations have left the denomination, and millions of dollars have been spent on litigation over property. At a news conference after his election, Curry was asked whether he will continue the stance toward the departing churches that was taken under Bishop Jefforts Schori.

CURRY (speaking at news conference): As a bishop, I’m supportive of the presiding bishop and the policies of our church, and I continue that. I can also tell you that that I am committed to the work of reconciliation. I think that is part of our Gospel mandate.

LAWTON: Curry says he wants to wait until he has assumed his new office before he specifies how he hopes to address the divisions. He supports the church’s position in favor of same-sex marriage, but also says any congregation that disagrees is not forced to comply.

LAWTON: Curry asserts it is possible to have unity, even in the midst of disagreements. 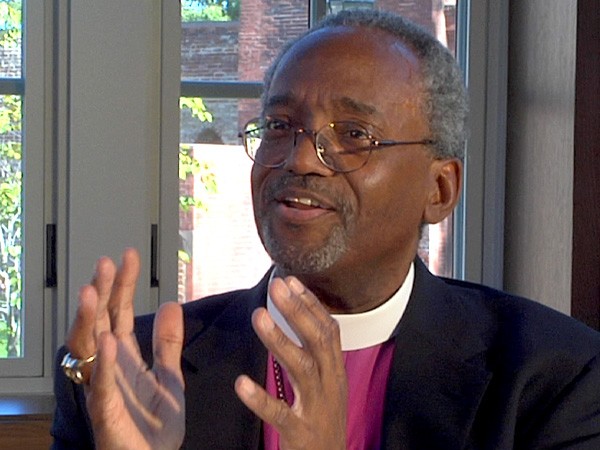 CURRY: We have things that we disagree about. But you know what? Disagreement isn't anything new in the church. Just read the New Testament. The question is not will there be a disagreement, but will there be a deeper unity? And I think part of our challenge now is to call us to that deeper unity and that mission that the world needs right now.

LAWTON: For the last 15 years, Curry has been bishop of the diocese of North Carolina, where he was active in social justice causes. He supported the faith-based Moral Monday protests  at the Republican-led state legislature that highlighted issues including voting rights, immigration, and poverty.

CURRY (2013 interview): If you look at the state budget, and you look at the weight of the tax reform, it is heavily weighted to the wealthy and, to be sure, to the corporations. And the working poor are the ones who are bearing the brunt of the burden.

LAWTON: The 62-year-old bishop grew up in Buffalo, New York, where his father was an Episcopal minister. Curry says it was there that he acquired a love of football. 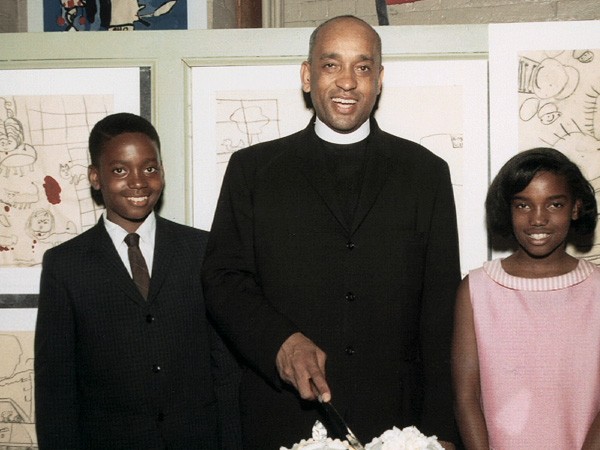 LAWTON: A graduate of Yale Divinity School, Curry is known across the denomination for his humor and his dynamic preaching style. He admits it often can be a challenge for religious leaders to maintain their own spiritual vitality. He tries to go on an annual retreat. In addition to daily prayers and Scripture reading, he says he gets spiritual strength from working out.

CURRY: I go to the gym every morning. It may not look like it but I actually do go to the gym. It's amazing. You can go and work out. And I hate it. I get up at five and force myself to go. I can't tell you how many sermons I've written on a treadmill.

LAWTON: He started taking violin lessons several years ago and says that, too, is a spiritual exercise.

CURRY: I love it. It's the best therapy in the world. It is like if you’ve ever done centering prayer, where you have to focus on one thing, one word, one image, and you just keep coming back to that image even when you get distracted. It's the meditation, you're centering down. The violin's like that because if you start thinking about other stuff, the bow gets out of control.

LAWTON: Curry will be leading the Episcopal Church from the denomination’s headquarters in New York City. He says he wants to see Episcopalians partner with other faith groups to, in his words, move toward becoming the human family of God.

LAWTON: Curry says he caught a vision for the church on a recent trip to Selma, Alabama, when he was staying near the Edmund Pettus Bridge, where civil rights protesters were beaten 50 years ago.

CURRY: I realized that that bridge filled with so much pain in memory also was the crucible of hope, because crossing that bridge was crossing from a painful past into a hopeful future. That's our work. To find ways to be a bridge community that does bring differing people together under the rubric of love.

We talk with Michael Curry, who is being installed as the new presiding bishop of the Episcopal Church at a service on Sunday, November 1, at Washington National Cathedral. The work of the Episcopal Church, he says, is “to find ways to be a bridge community that brings differing people together under the rubric of love.”