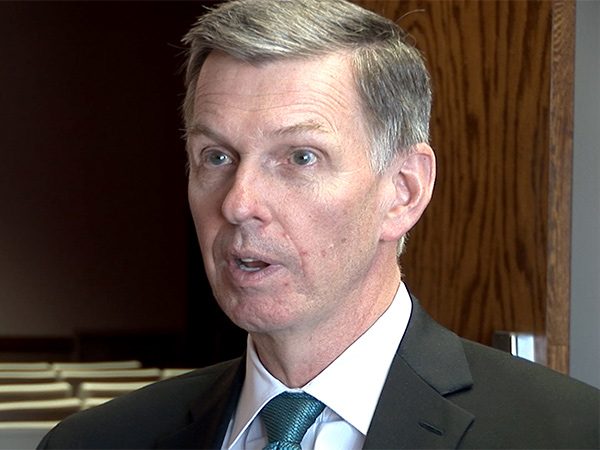 LUCKY SEVERSON, correspondent: From the fields and the orchards to the factories, the canneries, the giant warehouses, hundreds of thousands of people from all over the world: This is the Mormon Church’s welfare system. It is huge, it’s impressive and gets zero funding from the government. The managing director here is Steve Peterson.

STEVE PETERSON: The idea of caring for those who are in need we consider to be a scriptural mandate.

SEVERSON: A mandate Mormons says that comes from the Bible and from Mormon scripture received through revelation to its prophets.

PETERSON: And that’s grown into a wonderful program worldwide that focuses on caring for those in need, to relieve suffering, and to foster self-reliance and give opportunities for service both for those that receive things and for those that are helping out.

SEVERSON: That concept has grown to helping not only members, but nonmembers through humanitarian aid worldwide, and it’s apparently been done very well. This is Richard Humphreys, the manager of the Bishops’ Storehouse. 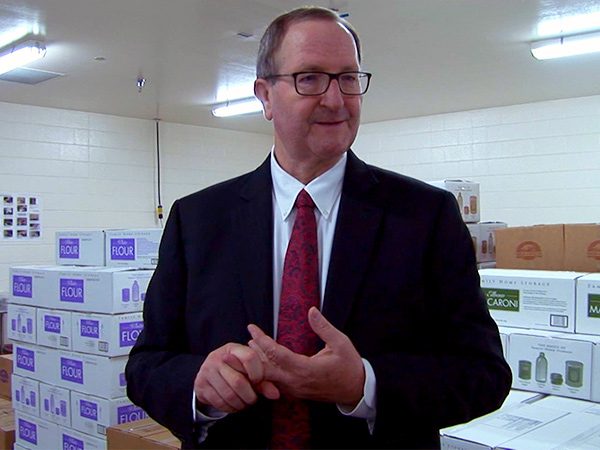 RICHARD HUMPHREYS: We’ve had the Department of Defense, we’ve had the army, the navy, the marines, FEMA. They’ve all come out, and they said wherever we go we’ve been told go see how the Mormons do it, because they’re always the first ones on the site.

SEVERSON: After Katrina smashed into New Orleans, Mormon convoys were among the first to arrive with 450 truck loads.

HUMPHREYS: As that hurricane was circling around in the Gulf of Mexico, we didn’t know where it was going to come inland, so we formed a big semi-circle that ran from Texas to South Carolina. As soon as that hurricane hit New Orleans, those trucks were sent out, and they were there within hours. 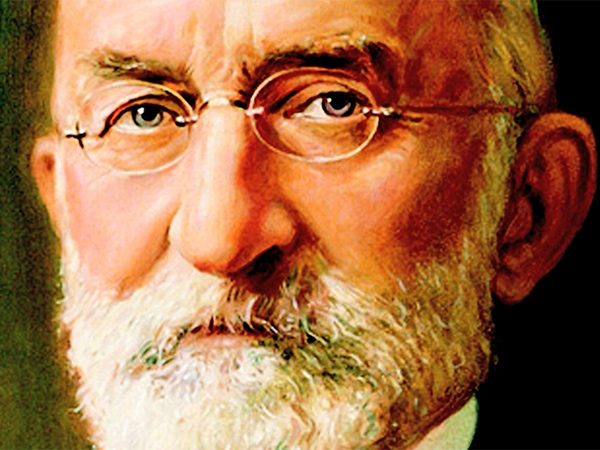 SEVERSON: Those trucks have a bee-hive on the side, a symbol very important to Mormonism. It is said to represent industry, harmony, order, frugality, and the sweet results of toil. And these people are busy bees—on the church’s farms and ranches that are some of the largest in the US, in their canneries and processing plants, and the fruit of this labor is given away. Well, not exactly given. Those who can, are required to work for it. Heber J. Grant, the prophet who started the welfare system during the Great Depression, said it’s purpose was to do away with “the curse of idleness” and help people help themselves.

BISHOP PAUL ROBERTS: Are they taking care of you okay?

SEVERSON: Bishop Paul Roberts is an attorney and a volunteer lay pastor.

BISHOP ROBERTS: Sometimes it helps them feel like they’re worth something. I talk to some people, and they don’t feel like they’re worth anything, because they can’t find a job, they can’t provide for their family, and you ask them to go do some service. They come here, and they help at the storehouse, or you have them go and they sort through clothes at the DI [Deseret Industries]. It is—helps them to understand that they have value, and they can contribute. 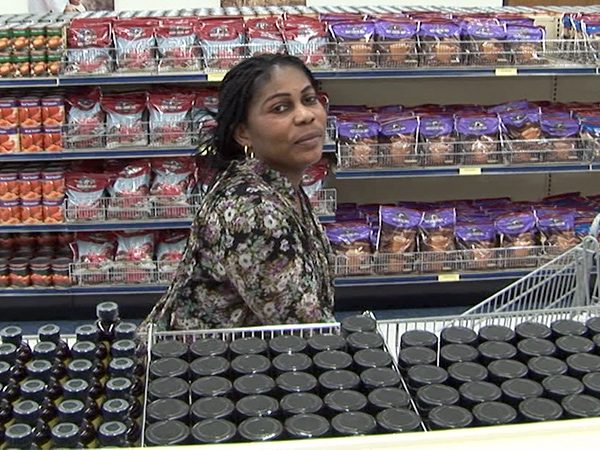 SEVERSON: Betty Mboutou is a refugee from Congo and a convert. She has a job, but the Church helps her with food. Members also come to her home to help her learn English.

BETTY MBOUTOU: I feel good, yeah. They help me for everything. I have a problem, they help me.

CINDY TRISHMAN: They do need to work for what they receive.

SEVERSON: Unless they can’t?

TRISHMAN: If they’re physically unable, or they can’t work for what they receive, well then yeah, we make accommodations.

SEVERSON: Cindy Trishman is a Church Relief Society president, an unpaid appointed position always held by a woman. She volunteers many hours a week helping members and nonmembers get their lives back in order. Here, in the Bishops’ Storehouse, she’s helping a member choose groceries. There are 115 Bishops’ Storehouses around the country. 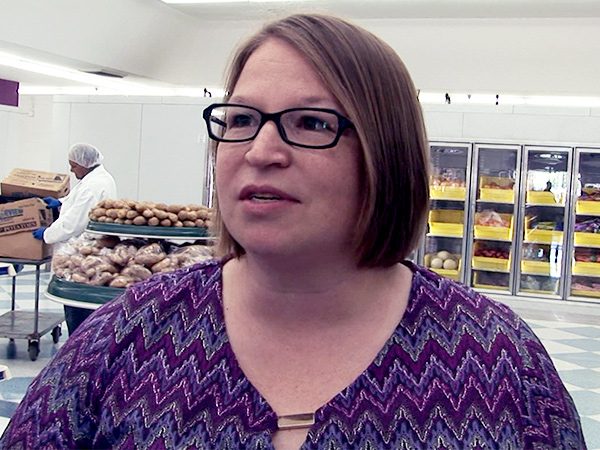 SEVERSON: Other helpers here include Wilma and Devon Scofield. They’re on what is called a service mission which typically lasts a year-and-a-half.

WILMA SCOFIELD: Makes you feel good when somebody comes in, and they get a real small order, and they’re crying all the way out the door because they have something for the night.

SEVERSON: Whether it’s in the bakery, the cheese factory, or the thrift store, volunteers are everywhere. Head of production and distribution Don Johnson:

DON JOHNSON: Just in our production and distribution activities we have over a million-and-a half-hours of volunteer service, and we could not do this without those volunteers 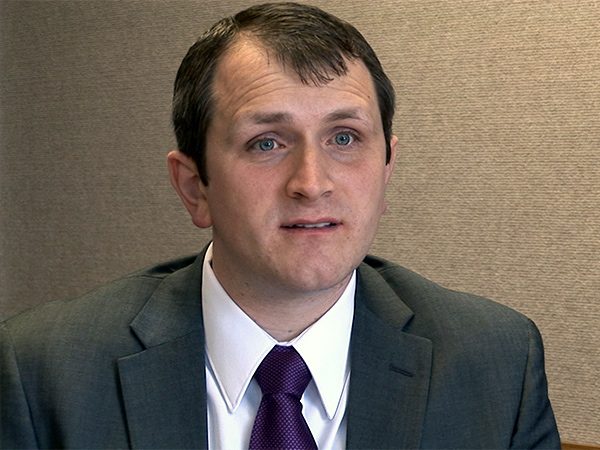 SEVERSON: Lay pastors like Paul Roberts are called bishops. They are the linchpins of the welfare system. If a family needs help, they call the bishop. He’s the man.

ROBERTS: And we work with people to help them get back on their feet. So sometimes they need temporary assistance, like they’ll need a food order, or they’ll need some utilities paid for. We stand ready to help.

SEVERSON: Sonny Cisneros doesn’t go to church much, but with a baby on the way and unexpected medical bills, the bishop stepped in to help out.

SONNY CISNEROS: It’s good food for a whole month or so. So I am very grateful and thankful for it. 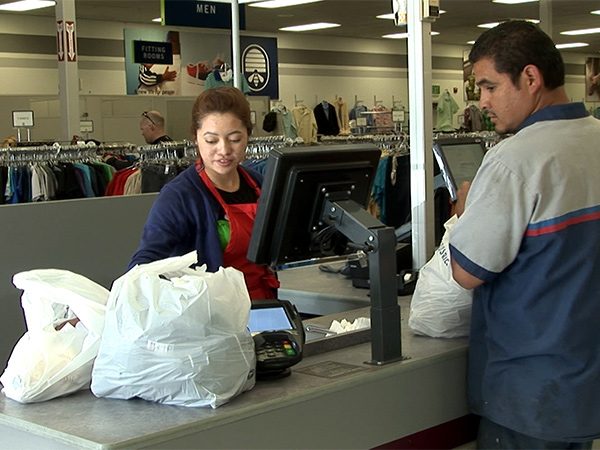 SEVERSON: This is Welfare Square near downtown Salt Lake City. It includes a job training center, grocery story, bakery, and a second-hand story called Deseret Industries. It’s the hub of the program, easy to spot by the towering grain silo.

RICHARD HUMPHREYS: Okay, you see me behind here a grain storage facility which happens to be one of 29 that we have in the Church. This holds our strategic grain reserve. This particular one, which is our oldest facility, holds 16 million pounds of hard red winter wheat.

SEVERSON: Much of the welfare system for members is funded by what are called “fast offerings.” These are donations from families who fast for two meals one Sunday each month and give the equivalent amount of money to the ward bishop. The humanitarian fund comes from separate contributions and is almost always for nonmembers. 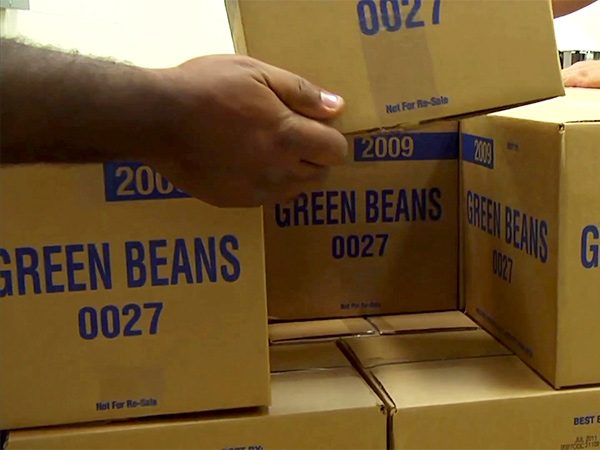 SEVERSON: That would also include local aid to some of the faith-based clinics and homeless shelters in and around Salt Lake City. Laurel Ingham is with the Fourth Street Clinic, funded mostly by the government and intended only for the homeless. The clinic also receives aid each year from the Church.

LAUREL INGHAM: I think the welfare program is truly amazing. Truly amazing. We are really given a gift. It’s very much a donation. Use it where you want. Use it where it can best be used. We have reporting back to them to say this is how much we have used. This is how many people have been served, but beyond that is no strings for us attached whatsoever. 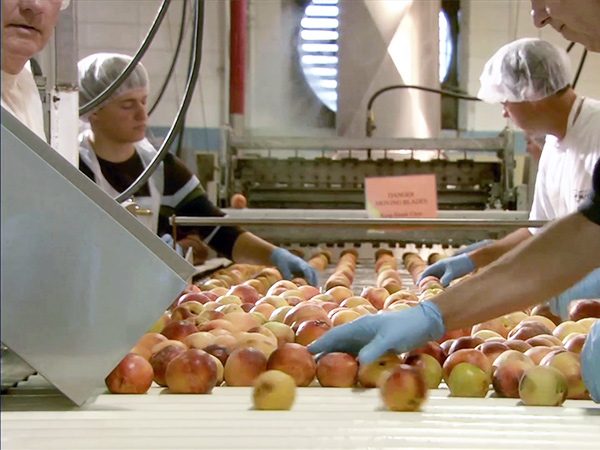 SEVERSON: This is the Bishops’ Central Storehouse. It’s huge, over half-a-million square feet, built to withstand a 7.5 earthquake. Everything goes through here to the smaller 114 storehouses around the country. There are enough provisions to meet the projected demands of members and nonmembers in the US and Canada for two years.

JOHN HOPKINS: When we look at the products throughout this building, 80 percent of the product is produced and packaged by the Church.

SEVERSON: John Hopkins is the manager of this operation. First he takes me through the refrigeration area, which is larger than football field.

SEVERSON: Wow, I believe it.

HOPKINS: What you’re seeing here is meat storage, and it’s about 4 to 6 months of inventory. In this facility we have 65,000 pallet spaces. It’s approximately 2700 truckloads.

PETERSON: There are no strings attached to this. It’s not because they’re members or because we feel some obligation because of their beliefs that we help them. This is aid that we give to anybody just because they’re in need, and we feel that it’s the right thing to do.

SEVERSON: As the Church continues to grow the need will get ever greater, especially since most of the growth is in Central and South America and Africa.

There may be other charities that are larger or more helpful, but the welfare tradition within the Church of Jesus Christ of Latter-day Saints must be one of the world’s best. As correspondent Lucky Severson reports from Salt Lake City, the program supplies food, clothes, and all kinds of care to those in need—Mormon or not. The relief is always free, and the men and women who do the work—growers, packers, distributors, and caregivers—are all volunteers.