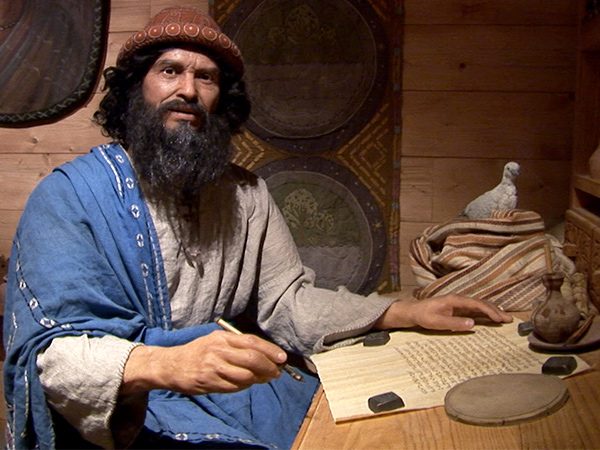 LUCKY SEVERSON, correspondent: This is a robotic version of Noah aboard his ark.

Noah: God said he was going to wipe out all flesh that lived on land. If he was speaking only of a local flood, it seems like God would have told me to move, instead of spending decades building this ark.

SEVERSON: Unlike Noah’s ark, which, according to biblical accounts, may have taken as long as 75 years to build, this one in northeastern Kentucky only took Ken Ham, the CEO of the Ark Encounter, a couple of years.

KEN HAM: This is the most authentic recreation of Noah’s ark in the world, based on the dimensions given in the Bible. And so that translates to 510 feet long, which is one-and-a-half times the length of a football field. 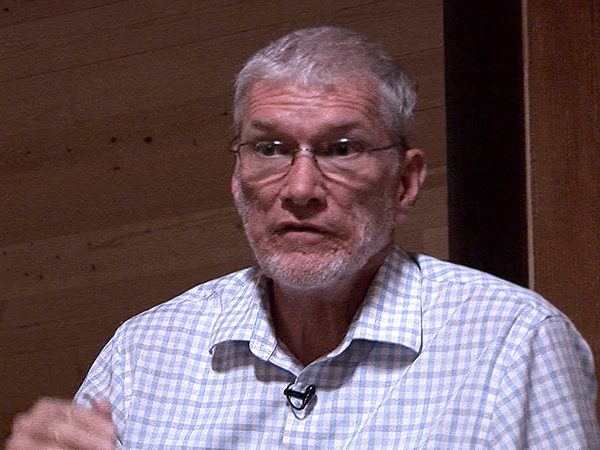 SEVERSON: It’s huge, and since the opening of this for-profit park in early July, over 35,000 people have taken a tour. It’s not cheap [$40 for adults].

HAM: Actually, we’re already seeing people from all over the world. I’ve met people from China, from Uruguay, from Honduras, Mexico Spain, Australia.

JAMIE BAKER: This is a Chamber of Commerce dream, yes. 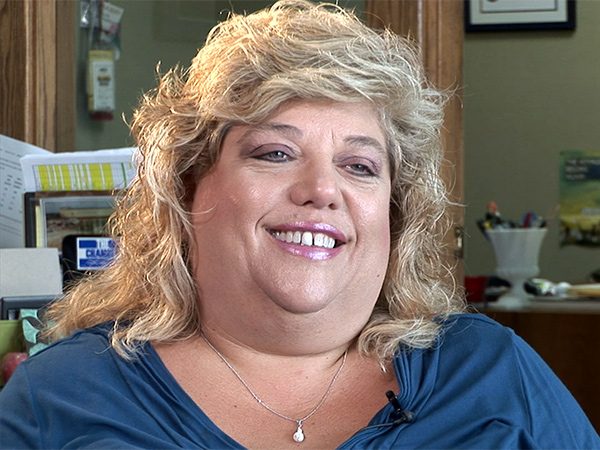 SEVERSON: This is Jamie Baker, the happy executive director of the Grant County Chamber of Commerce. Grant County is the proud home of the Ark Encounter.

BAKER: Oh, my goodness. Literally since the ark has opened the phones have rang off the hook. I took a call today from Louisiana. Took a call earlier from Alabama. They want to bring a 50-person bus tour in.

SEVERSON: Brandon Hudson comes from Indiana. He loves the ark because it supports his belief, and that of Ken Ham, that the Bible should be interpreted literally and that the earth is only 6000 years old and that man and dinosaurs lived together at the same time.

BRANDON HUDSON: And then from the science side it’s been an encouragement to reinforce why we believe what we believe, the biblical world view that we have.

SEVERSON: Joe Phelps pastors a congregation of about 1400 at the Highland Baptist Church in Louisville. 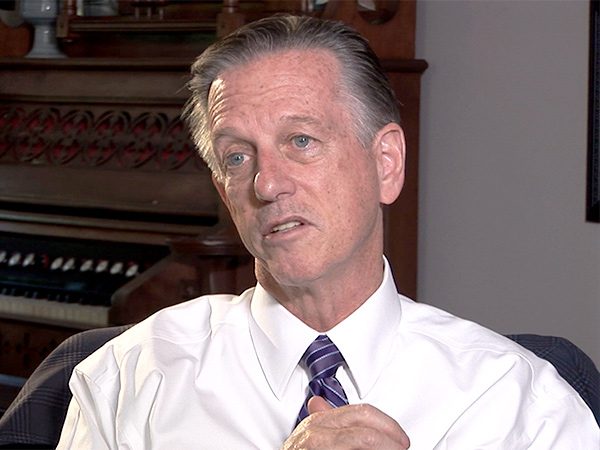 PHELPS: The story of Genesis, at least the way the Ark Park tells it, is we’re better than everyone else, we got saved by God, everyone else is excluded, and oh, by the way, unless you follow this particular trail then God doesn’t love you very much, and what happened in the early days might happen to you.

SEVERSON: The ark has three levels. The bottom holds the cages of animals representing only a small number of the different species Noah may have loaded aboard his ark.

Girl: The animals that they made look like real animals. I kind of mistook them.

SEVERSON: The middle level includes the living quarters for 600-year-old Noah, his wife, three sons, and their wives.

SEVERSON: According to the Bible, Noah and family spent about a year on the ark until the world-wide flood receded. Every other living thing perished because, according to the Book of Genesis, man had turned against God. Ken Ham feels that is what’s happening in the world today. Hence, the Ark Encounter.

HAM: We see increasingly the secularization of our culture, and the church is not really impacting the culture as it once did. So what can we do to make an impact in the world? Well, why not build a Christian-themed attraction that the world is going to take notice of for the purpose of getting people talking about the Bible. 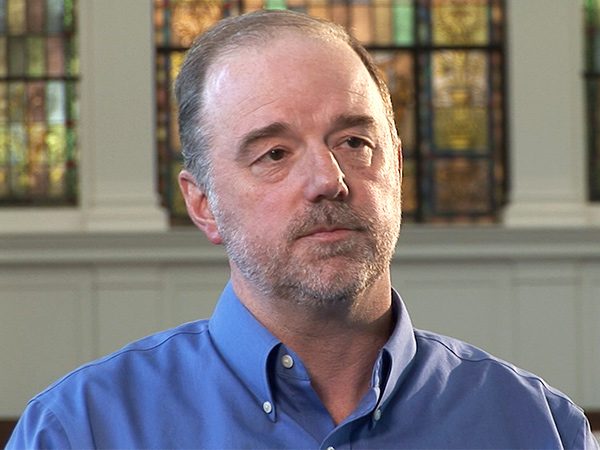 SEVERSON: In the beginning, the state of Kentucky offered Ark Encounter a huge tax break, over $18 million, and then cancelled the offer after learning that the enterprise would hire only Christians who signed a statement of faith. So ark owners sued the state, claiming that their right to free speech had been violated. The judge agreed, and the sales tax rebate was reinstated, which did not sit well with a number of religious leaders in Kentucky. Pastor Chris Caldwell, for instance. He’s the pastor of the Broadway Baptist [Church] congregation in Louisville.

REVEREND CHRIS CALDWELL: They’re very clear that the purpose of the Ark Park is to contribute to their ministry of evangelizing people, converting them to their form of religion, and their very narrow understanding of Scripture, and they very much see it as a vehicle to execute that mission, and I don’t think tax dollars should directly or indirectly support a mission like that.

PHELPS: It’s enormously troubling that they have received state funding but now are going to have a statement of faith that their employees are required to sign in order to work there.

SEVERSON: If you want a job here, you have to sign a statement of faith that says, among other things, that the world was created in six consecutive 24-hour periods. 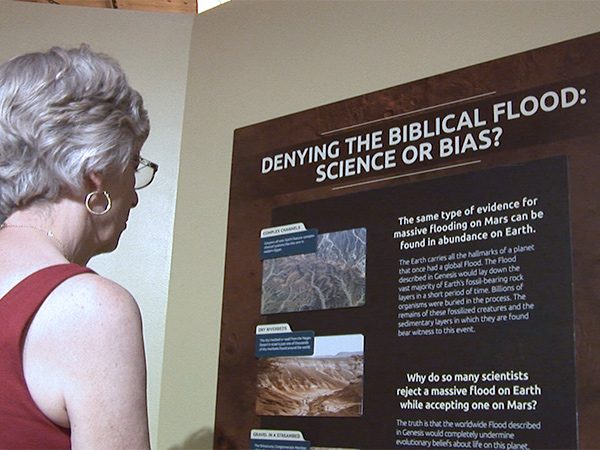 HAM: The law which the judge has already ruled on, the law is that if you are overtly a religious organization then you have every right to have a religious preference in hiring.

SEVERSON: The ark has already provided 300 jobs in a community that really needs them, and Ken Ham has projected ultimately as many as 20,000. Jamie Baker wants those jobs.

BAKER: We have over 80 churches in Grand County. We don’t all agree the same way.

SEVERSON: Wouldn’t a lot of members of those churches not be qualified on this statement of faith?

Noah: Do you have any more questions?

SEVERSON: Is this the end of times, the last days? 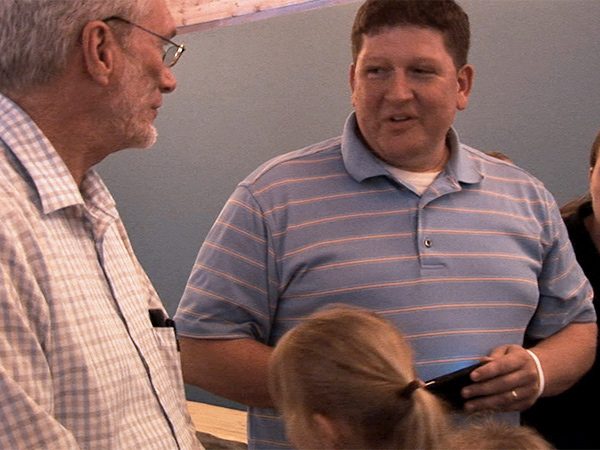 SEVERSON: Ham has projected as many as two million visitors a year. Even if that’s high, there are plenty of people who will make this a pilgrimage, like Brandon Hudson.

HUDSON: What a testimony of God’s grace. I’m blown away, encouraged, highly encouraged. You’ll have to come back. We’re bringing our church with us next time.

SEVERSON: Actually, Ken Ham may be hoping that the last days are a ways away. The Ark Encounter cost a $100 million to build, and he needs to pay back his investors. It could take a while.

Lucky Severson visits Noah’s Ark Park, which opened last month in northeastern Kentucky, and talks to Ark Encounter CEO Ken Ham as well as his critics. His recreation of Noah’s Ark is 510 feet long and seven stories from ground level to the bow. Critics object to tax breaks provided by the state along with the statement of faith required of Ark Park employees, but Ham points to the number of jobs he’s created and the revenue the ark will bring to the area.