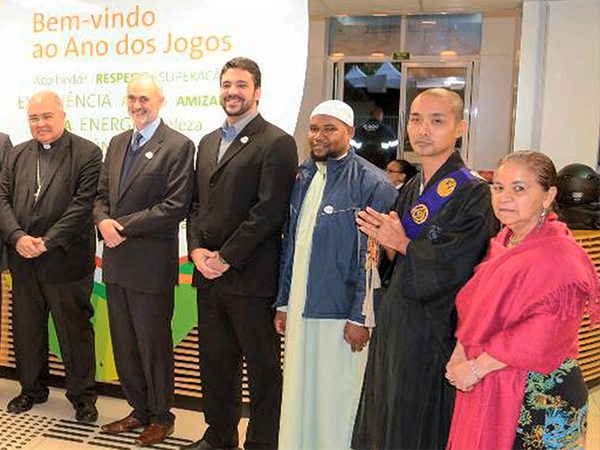 TIM O’BRIEN, host: The 2016 Summer Olympic Games are getting underway in Rio de Janeiro. Kim Lawton reports on some of the many ways religion is playing a role.

KIM LAWTON, correspondent: With the diverse array of athletes and spectators descending on Rio, some observers say this could be the largest interfaith gathering on earth. And in developing the infrastructure of the Games, Olympic organizers took religion into account. Christian, Muslim, Jewish, Buddhist and Hindu representatives met several times to plan how the spiritual needs of the athletes would be met. They consulted on the creation of an inter-religious center inside the Olympic Village, where athletes are able to pray and hold worship services as well as receive spiritual counseling. There are 24 officially-designated chaplains from the world’s five major religions. A special committee also worked on making religious accommodations for athletes, such as helping Muslim women negotiate uniforms consistent with their faith traditions. Fencer Ibtihaj Muhammad is the first hijab-wearing athlete competing for the US. Outside the Olympic Village, many faith-based groups are on site to evangelize or to raise issues of concern. Some religious charities are criticizing Rio for clearing out poor people from the city in what they said was an attempt to hide the poverty that exists in many areas. Other humanitarian groups praised the Olympic Committee for raising awareness about the global refugee crisis by allowing displaced people to compete together under a single flag. The team includes refugees from Syria and Africa. Meanwhile, Pope Francis has also gotten into the Olympic spirit. He released a new video urging prayers that the practice of sports “may contribute to peace in the world.”

The 2016 Summer Olympic Games are getting underway in Rio de Janeiro. Kim Lawton reports on some of the many ways religion is playing a role.