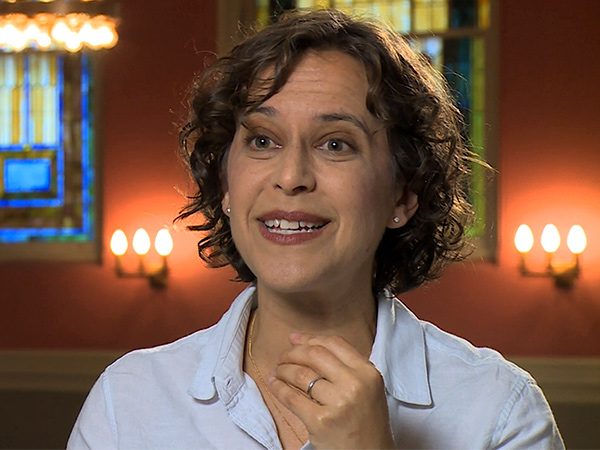 RABBI SHIRA STUTMAN, (Sixth & I Historic Synagogue):The Amidah is considered the central prayer in the Jewish tradition. It is considered the time in the prayer service where we are most open spiritually, and we’re really ready to talk to God. The Amidah is known as a silent prayer. And one of the reasons for the silence is because a person shouldn’t be distracted from the conversation that they are having with God. But actually if you go to a more traditional synagogue during the Amidah, it will not be silent.

The first part of the Amidah is the moment where we reflect on our ancestors, being descendants of Abraham, of Isaac, of Jacob—and of course in contemporary times we also say of Sarah, Rebecca, Rachel, and Leah. And because of their merit and because of the ways that they interacted with God in ancient history, so too may God be gracious to us and protect us and help us live to be our best self.

As we begin the Amidah, we begin by taking three steps backward and then three steps forward as if we are entering God’s kingdom. We begin with bowing before God. We bend our knees, we bow down as we say the words baruch atah, blessed are You, and then we rise up as we say God’s name, believing that it is God or God’s presence that can somehow lift the fallen. You will often see, if you go into a Jewish prayer service, people using their bodies during the Amidah in one of two ways: either they are moving back and forth wildly—we call that in Yiddish shuckling—as if it is a sort of dance that they are doing with God. Or sometimes in some Hasidic traditions they actually stand stock-still.

When we say the Kiddusha, we are actually supposed to rise up on our toes like we are angels. It is an embodied prayer. At the end of the Amidah, we take three steps back, we are exiting God’s kingdom, we bow to the left, to the right, in front of us as we say this prayer for peace, and then we rise up again on our tip-toes as a way of recognition of all the holiness that we have just been a part of. One of the themes that is complicated for a lot of Jews who are saying the Amidah is the theme of the resurrection of the dead. But even the idea of mechayeh hametim, the one who brings the dead back to life, can have meaning even for those of us who don’t necessarily believe in the resurrection of the dead. Because we understand this concept of being broken. We’re talking about those moments that all of us have experience of feeling bereft—the dark night of the soul, some people call it. Those are the moments that God can help resurrect us. This prayer that goes back thousands of years can be changed, and it can also be kept as it is and given new meaning and made eternally meaningful for the Jewish people.

Senior Rabbi Shira Stutman of Sixth & I Historic Synagogue in Washington, DC explains the meaning of the Amidah, “the central prayer in the Jewish tradition.” We also visit a Friday night service at Sixth & I led by Rabbi Scott Perlo and Jewish music pioneer Rick Recht, as well as a prayer service at the Magen David Sephardic Congregation, a modern Orthodox synagogue in Rockville, Maryland, to see the ways the Amidah is prayed.