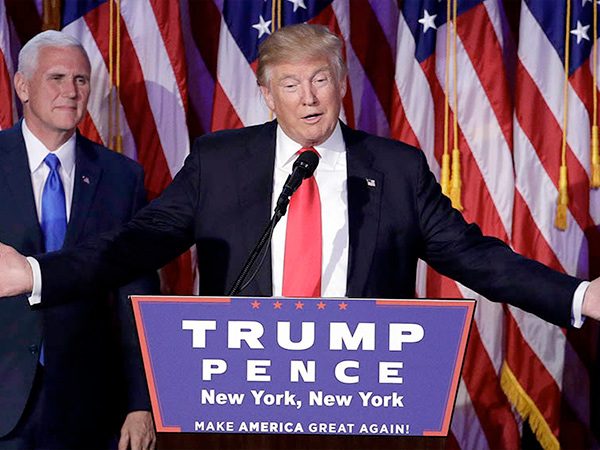 BOB ABERNETHY, host: As Donald Trump supporters celebrated and many of his stunned opponents wept, faith leaders across the spectrum congratulated him on his election and promised to pray for his presidency. Many also committed to holding him accountable on their particular issues.

The deep national divides confirmed by the election were clearly evident among faith-based voters. Evangelicals made up a quarter of the voting public and many experts said their overwhelming support ensured Trump’s victory [….]

Joining me now for more analysis of the election is our managing editor, Kim Lawton, and Jerome Socolovsky, editor-in-chief of Religion News Service. 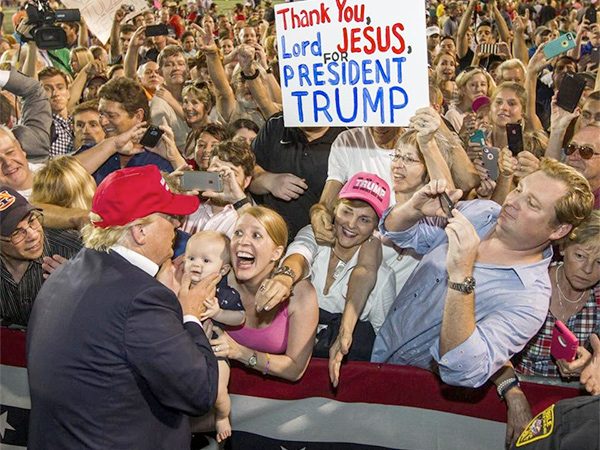 JEROME SOCOLOVSKY: Well, from a religion perspective, Bob, Donald Trump captured 81 percent of the white evangelical vote, as you just mentioned. That was key, because if you take away the evangelical share of the vote, which is about a quarter, Hillary Clinton would have won by a landslide. Now, 81 percent is slightly more than Mitt Romney got, but keep in mind that this time around there were some evangelical leaders who were telling their followers not to vote for Donald Trump.

KIM LAWTON: It was a really interesting debate within the evangelical community. I think there were more debates and divisions than the 81 percent figure would really indicate. But there was a lot of discussion about some of the things that Donald Trump said that women and African Americans and immigrants and others found insulting. And there was concern in the evangelical community about some of his, you know, his morality, his behavior. And people were saying, well, it was the evangelicals who were concerned during the Clinton administration about some of Bill Clinton’s activity. Why did Donald Trump not have the same concern? So it was an interesting conversation. In the end a lot of the evangelicals clearly did vote for Trump, but I don’t think it was a really strong, enthusiastic support for many of them.

ABERNETHY: But Jerome, are the evangelicals now in a position to say to people in government, we got you here, now pay off?

SOCOLOVSKY: They are not only in a position to say that, but they are saying it. I was at a couple of press conferences on Wednesday here in Washington with some of the evangelical political figures who were saying essentially “Donald Trump owes us.” He has to make good on his promises. They may be expecting Donald Trump to do that. I have a feeling they may also be hoping that Mike Pence, who was a choice in their favor, will be whispering in the president’s ear. 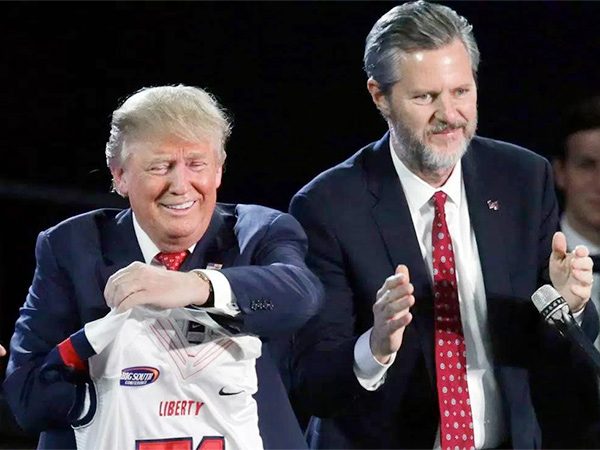 LAWTON: It will be interesting to watch, because we’ve seen this happen in the past before, in other administrations, where the evangelicals came out. This time around there was a big mobilization from some of these groups. The political groups really did a big get-out-the-vote push. But it’s happened in the past, and then the administrations haven’t necessarily followed through or done exactly what they had hoped. So it will be interesting to see if Donald Trump does, especially on some of the issues that were really of top concern for them, like abortion, like Supreme Court justices, and judges, and even gay marriage. But Donald Trump will also be getting pressure from other quarters as well, so I’m going to be watching really closely to see what he does.

ABERNETHY: Have evangelicals discovered from their past experience of the last few years that getting too far into politics can be a big problem?

SOCOLOVSKY: It certainly does turn off a number of people. However, there were a lot of people this time around who heard anti-abortion messages from the pulpit, and that influenced their votes. There were many people who really viewed Hillary Clinton as a “murderer.”

LAWTON: It’s hard to discount the level of dislike for Hillary Clinton in some of these conservative religious communities. Conservative Catholics and evangelicals both, white evangelicals—there was a sense of mistrust of her. They didn’t like her and her abortion stance and some of her other positions. They just had this really deep dislike of her, which is interesting. 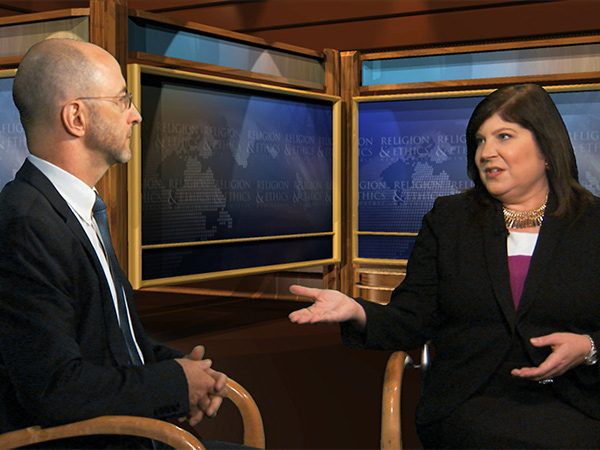 ABERNETHY: But Kim and Jerome, this is part of, the evangelical thing, is a part of a maybe bigger swath of the country that feels that the prosperity of the last few years hasn’t come to them, indeed has hurt them. Factories have closed down, and they don’t have jobs. They really feel like an abandoned minority. And so the vote Tuesday, even though it was difficult for them, that vote was a protest vote, a big protest vote. A demand for change.

LAWTON: I think there is a sense of alienation, economic alienation, but also cultural alienation for some of these religious conservatives feeling that the broader culture doesn’t share their values on things like gay marriage, on abortion, some of the other stuff going on in pop culture. They feel like maybe the government leaders don’t listen to them, they pay attention to other folks but not to them, and they’re worried about their ability to exercise their religion. You know, this religious liberty question that a lot of people talk about was big, so there is a sense of feeling like outsiders. But there are other groups that feel like outsiders who are now worried about being outsiders in the Trump administration as well. Muslims, immigrants, African Americans, and others are concerned as well, and I’m hearing that from the religious community also.

ABERNETHY: I’ve had phone calls and talked to several people who’ve had the same experience, which is a lot of young people, for whom this may have been their first big election, were just devastated because Hillary Clinton didn’t make it. Have you seen that? Heard that?

SOCOLOVSKY: It depends where you look for the young people. Yes, I believe Hillary Clinton got the youth vote, or the 20-something vote. However, there are many young people in rural areas who feel left out, they feel like globalization has not brought fruits to them and their families and the people around them. 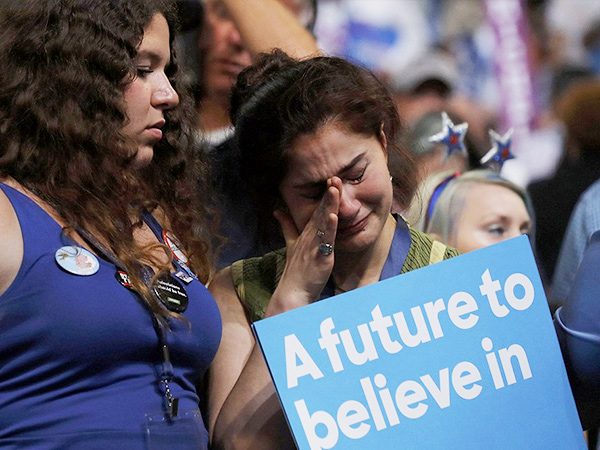 LAWTON: I’m hearing from some of these folks in the faith community that were disappointed, devastated, I’m hearing them commit themselves to wanting to work harder for their values. Many of them are very upset because they had supported Hillary Clinton for a lot of reasons. But I am hearing a lot of them saying this is going to galvanize us to work for the values we care about, to take care of the marginalized, to take care of immigrants and refugees, to take care of “the least of these” is language they use. And so I’ll be watching to see the extent to which they do get involved. How much of this is just the emotion immediately after an election and how much will this encourage people to get involved? To make sure in the future maybe there are candidates they do like. Because you heard so much about people didn’t like so many of the candidates.

ABERNETHY: Kim Lawton, many thanks. Kim Lawton of this program and Jerome Socolovsky, editor-in-chief of Religion News Service. Thank you.