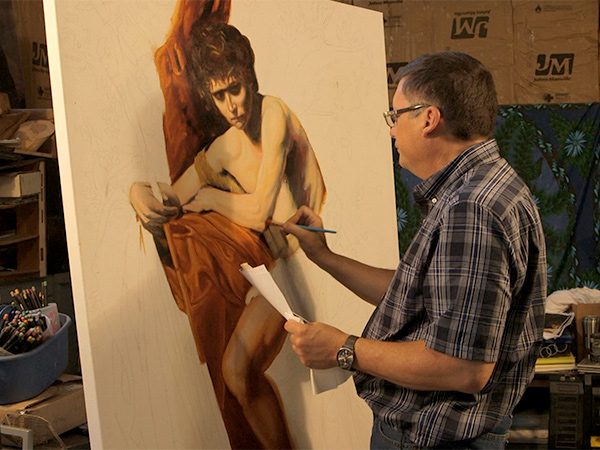 JUDY VALENTE, correspondent: Artist Michael Northrop spends much of his day painting in an old barn-turned-studio on his family’s hundred-year-old farm in southwest Michigan. He specializes in art for houses of worship. A few years ago, Northrop, a former minister in the Church of the Nazarene, seen here in self-portraits he painted, was confined to a wheel chair, stricken by multiple sclerosis, an illness he had battled since his mid-twenties. But these days there’s no trace of the disease in his body—a recovery for which his doctors have no explanation. But Northrop has a theory.

MICHAEL NORTHROP (EarthSong Peace Chamber): This area gave me both the energy, the stability, and community to support that healing in a way I don’t believe I would have had anywhere else. 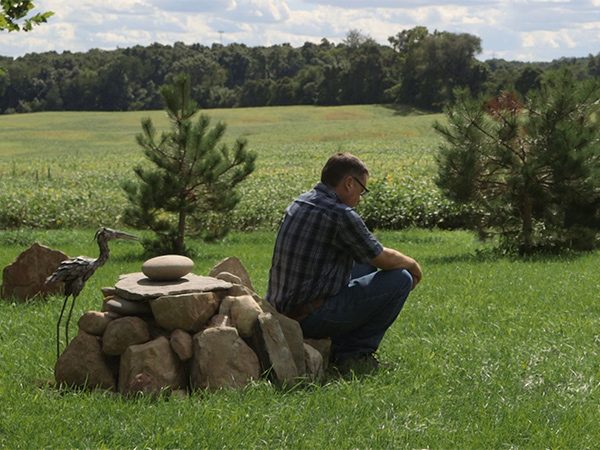 VALENTE: The area is Three Rivers, a rural community at the confluence of three waterways that has been associated with spiritual energy since Native Americans first settled here many centuries ago. Legend has it that the land here is crossed by what are known as “ley lines”—places where for centuries a spiritual energy has seemed palpable to people who visit and that today are still marked on the landscape by stones.

NORTHROP: When we talk about spirit of the land—it’s very personal here. It’s really a part of our story. There’s a sense of a dynamic movement of spirit. I feel a power that comes into me and that is—it’s thrilling. It’s like stepping into that beam of divine power.

VALENTE: It’s perhaps not surprising that Three Rivers is home to five major spiritual retreat centers nestled between woods, wildflowers, hills, and fields, all within walking distance of each other. There is St. Gregory’s Abbey, one of the few Episcopal Benedictine monasteries in this country; the Hermitage, founded by a Mennonite pastor and his wife for people seeking healing and renewal; GilChrist, which bills itself as an ecumenical lay monastery; the Apple Farm Community, where psychological exploration, specifically the ideas of Carl Jung, is used to deepen the inner life; and the EarthSong Peace Chamber, where Native American rituals are celebrated.

Some people come to visit Three Rivers, then stay a lifetime. Nancy Bell had been working in Cambridge, Massachusetts as a medical professional helping the blind live independently when she came to visit relatives in the area. Her car stalled on a hill, and she stopped at a farmhouse to call for help. It was then, she says, she heard a call from God. 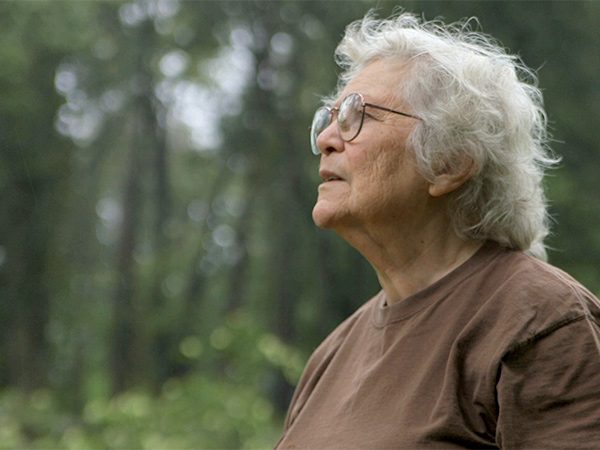 NANCY BELL: It was very clear to me, and I just had this very profound sense that I was to come home and build a nest.

VALENTE: That was decades ago. Bell eventually bought the farmhouse where she had stopped and began receiving spiritual direction from the monks at St. Gregory’s Abbey. She was introduced to the writings of Thomas Merton, the Trappist monk who spent the last years of his life living as a hermit on the grounds of his abbey in Kentucky.

BELL: And, of course, I knew nothing about what a hermit was. I’m Quaker.

VALENTE: Today, Bell describes herself as both a hermit and an anchorite, someone committed to staying in place—in this case, the land she calls a sanctuary infused with ancient Native American wisdom, and practices what she calls “the presence of God.” 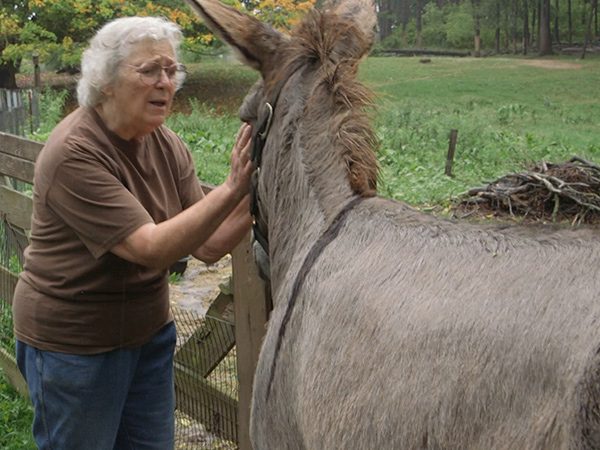 BELL: My hope is that every breath I take, every step is prayer. You know, there are only these two hands here taking care of the animals. Work can be a meditation. And so I try to do what seems to be the thing to do in the moment. Basically I just do simple, everyday things. I guess gratitude probably would be my major prayer. Just being thankful.

VALENTE: She spends a portion of each day in this hundred-year-old chicken coop which she rebuilt. She says it represents the stable where Jesus was born. Bell manages to supplement her modest income by doing housekeeping and guest reception at one of the area’s retreat centers.

BELL: Happy people do what their inner being tells them to do, and when you do that, it doesn’t really matter whether you have very much money or anything. So I’ve come to this life of faith where you’re living in the nitty gritty of it rather than talking about it, you know, in lectures. 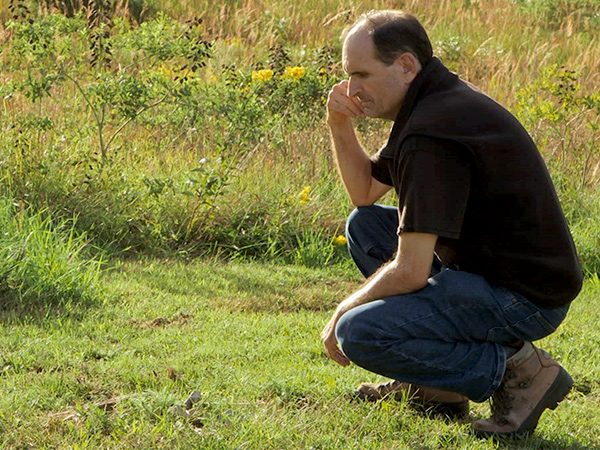 VALENTE: Writer William Allen Baltz was an accidental pilgrim who moved from Chicago to Three Rivers. With its lush, peaceful scenery, he thought it would be a great place for writing, hiking and canoeing. He soon began making regular visits to the five retreat centers, and discovered a new sense of the sacred.

WILLIAM ALLEN BALTZ (Author, Spiritual Nexus: Discovery in America’s Heartland): When you really open up, clear your mind, but open it up for, let’s say, a voice inside you, that’s a very sacred, special thing.

VALENTE: Baltz eventually wrote a book called Spiritual Nexus, about his experiences in Three Rivers—a place he says represents the “intersection of time and the timeless.” 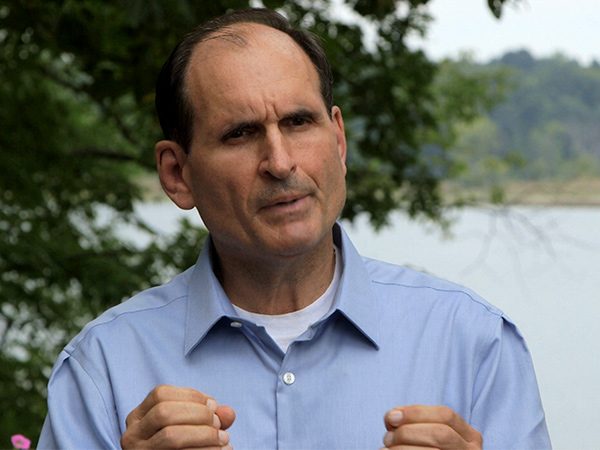 BALTZ: The Abbey is a place where I learned about “The Rule of St. Benedict,” taking time to be mindful of time itself.

VALENTE: Baltz was raised a Methodist and later joined a Presbyterian church, but says something was missing. He felt the need to go deeper, to explore other traditions—something he could do at the Three Rivers retreats.

BALTZ: I met many interesting people, but in the end, you’re taking these steps by yourself. This is now your own journey, as opposed to an institutional one.

VALENTE: Many people seem to discover Three Rivers while in the throes of mid-life decisions. Lynda Hollinger-Janzen, a former Mennonite missionary, says she arrived at the retreat center known as the Hermitage angry, missing the people she knew in Africa, uncomfortable with American culture, and unsure about her future. Her spiritual director at the Hermitage suggested she spend some time alone in a hut in the woods on the property. 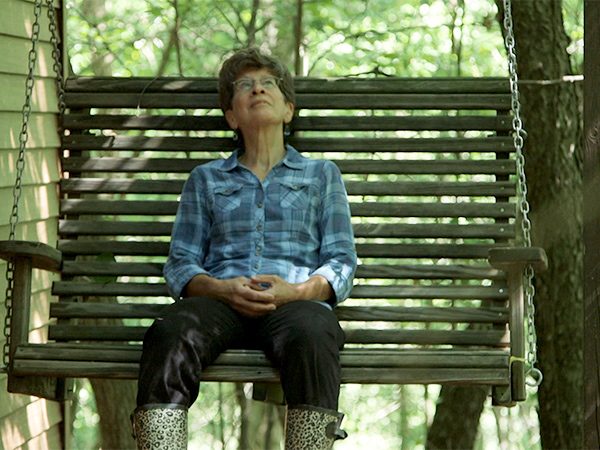 LYNDA HOLLINGER-JANZEN: So I went, and there in the woods there was nothing. I was sitting on the swing. It was a dark, overcast day. What am I doing here?

VALENTE: Hollinger-Janzen was meditating on the Spiritual Exercises of St. Ignatius of Loyola. They call for creating mental images of passages from the New Testament. An unexpected image came to her in that moment.

HOLLINGER-JANZEN: I looked up and I saw Jesus on the cross smiling down at me. And it was so amazing to think that Jesus, in a time of suffering, could smile on somebody as unlovable as I was being the past four days.

VALENTE: Hollinger-Janzen ended up settling in a town not far from Three Rivers and now volunteers at the Hermitage.

HOLLINGER-JANZEN: It’s the one place I feel at home.

VALENTE: Nancy Bell says an increasing number of young people are finding their way to the area.

BELL: I think there are tremendous amounts of young people who have this caring for the place they live and for the earth, and they want to make things better. 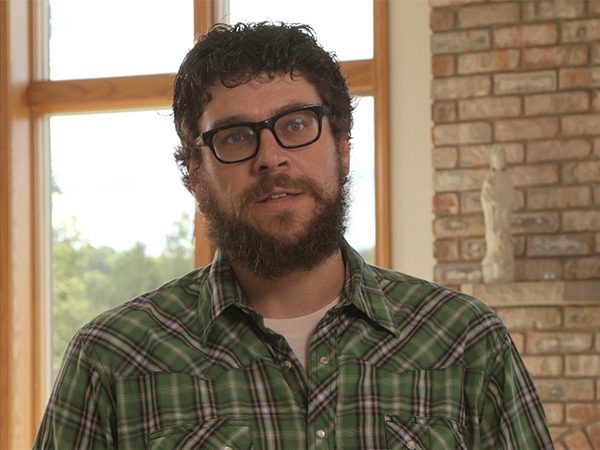 VALENTE: One of them is Rob Vander Gieseen Reitsma. He often goes with friends to the Benedictine abbey and the other retreat centers.

I think one of the big takeaways that students come away with from these communities is the value of silence. Cell phones don’t work very well, and while that’s very uncomfortable at least initially, a lot of students really after several days they will say, “Wow, I found that incredibly valuable.”

VALENTE: The five spiritual centers are all not-for-profits that are supported mainly through private donations and the free-will offerings of people who stay at them. Their calling card is the testimony of those who say their lives changed here. People like the artist Michael Northrop, who say they thrive on the tranquil beauty of these surroundings with their echoes of the eternal.

Throughout history, many people of faith have found spiritual energy in certain remote places around the world. One such place in the U.S. is at the convergence of three rivers in Michigan, where correspondent Judy Valente spoke with retreatants about the spiritual healing they have experienced, and where they told her they are able to practice “the presence of God.”