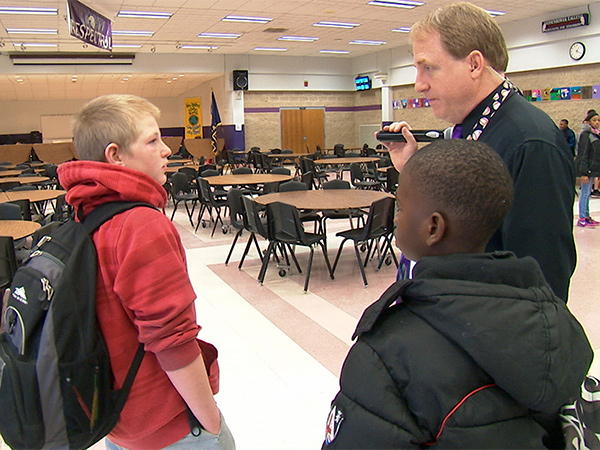 JUDY VALENTE, correspondent: When he first began teaching at Eisenhower Middle School in Topeka three years ago, John Dunegan was astounded at the number of times the school’s sixth, seventh, and eighth graders were sent to the principal’s office for fighting with teachers or with each other, and other disruptive behavior.

JOHN DUNEGAN (Teacher, Eisenhower Middle School): They would go to the office, and they would say don’t do that again and be sent back to class. The kid was still angry. They’d pop off again, and they’d get sent right back out. The unbelievable part about it is that by the end of the year, we’d sent students out of class 5,200 times. Just a non-stop revolving door.

VALENTE: The staff at Eisenhower decided to do something about that revolving door. Now, when behavior problems arise students participate in a conflict resolution circle that includes the teacher, a mediator, and sometimes their parents. In the center of America’s heartland, Eisenhower is part of a growing trend across the nation to help students learn techniques for peacefully resolving conflict. These schools also practice “restorative justice.” It’s a form of mediation that helps students examine and alter their behavior, as opposed to punishing them. 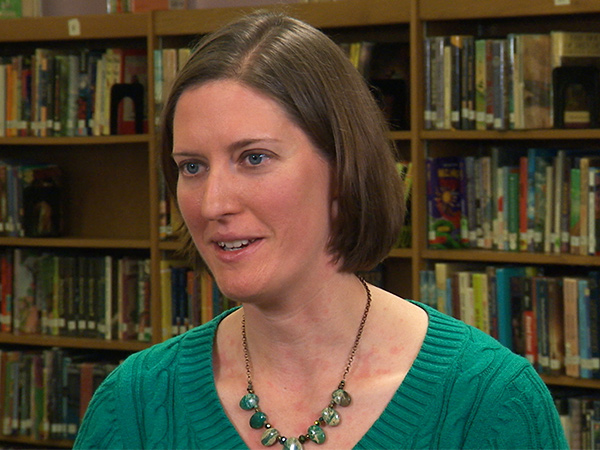 SHARON KNISS (Director of Education and Training, Kansas Institute for Peace and Conflict Resolution): Schools play such a disproportionate impact in our young people’s lives. There’s the family, there’s the community, but how many hours are they spending in schools? And so what happens within the school setting, I think, is that much more important.

VALENTE: Sharon Kniss is with the Kansas Institute for Peace and Conflict Resolution, which trains teachers in restorative justice practices. Restorative justice peace circles have roots in Native American, Quaker, and Mennonite spirituality. But in the public schools, the process is simply called a “circle,” to avoid any religious connotation.

DUNEGAN: This is our talking piece. This is a symbol that we focus on.

So we do have a talking piece. The only person talking is the one with the piece, and the other people’s job is just to listen. That’s what kids want most of all is a chance for their voice to be heard, for them to have a chance to say how they’re feeling, and we believe very much that’s an important thing.

VALENTE: The opportunity for restorative justice comes in when students sign an agreement about how they will resolve the conflict that has arisen, or repair the relationship that’s been harmed.

VALENTE: At Eisenhower and other schools, these practices have replaced zero tolerance policies that result in the suspension or expulsion of students for a variety of infractions.

DUNEGAN: If we know at schools that every time we suspend a child for non-dangerous chronic misbehaviors, that we’re increasing the chance of them ending up in the juvenile justice system or the justice system in general, we’re not doing them any service. 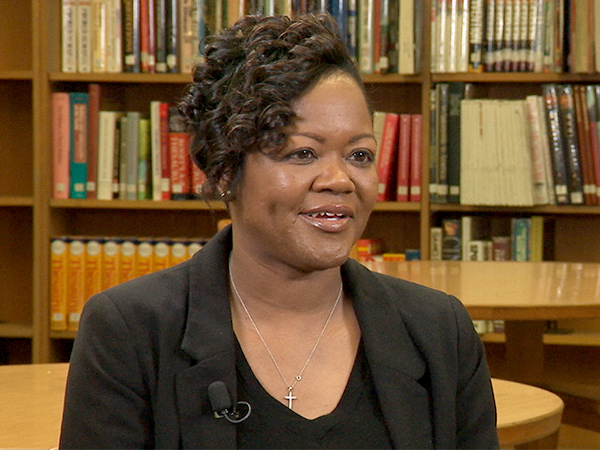 VALENTE: Topeka is a city divided between a more affluent West side and a struggling East side, where Eisenhower is located. About 86 percent of Eisenhower students qualify for free breakfast and lunch. Topeka’s crime rate is higher than that of Kansas and the nation as a whole. Keeping students out of the schools-to-prisons pipeline is a major concern.

LEOSHA GIARDINA (Principal, Eisenhower Middle School): Drugs, weapons, being a danger to our other students—yes, you should be suspended for those. But in that we want to make sure that we’re teaching them something, because just suspending you is not going to get the result. It’s just going to give you the opportunity to do it over again.

VALENTE: Since Eisenhower began using these practices three years ago, the number of fights has dropped dramatically. Attendance is up, and so is academic performance.

DEBORAH BROOKS-PERRY (Parent): I believe it was helpful to know that all his teachers are there for him, and willing to help him and give their time for him.

VALENTE: Seventh grader Dayshawn Perry and his mother both seemed surprised—and pleased—at how things had gone after participating in a circle with Dayshawn’s teacher about his disruptive classroom behavior. 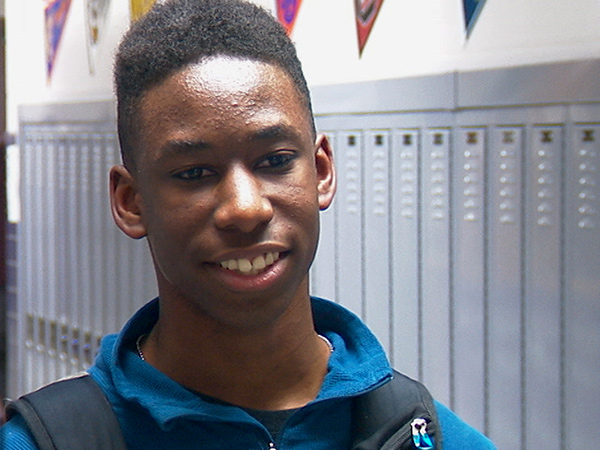 (Speaking to Dayshawn): What about when they said all those nice things about you? How’d that make you feel?

JANET FOX PETERSON, Ph.D. (Wichita West High School): We have known students who have been murdered by guns. We have every challenge that a larger city has.

VALENTE: Expulsions have decreased 50 percent in the past six years at Wichita West. Attendance, tests scores, and enrollment have improved. Now the school uses circles not only for conflict resolution but to foster a better sense of community and help students solve problems before they get out of hand.

STUDENT: Like to make people wanna change, you have to be changed yourself.

VALENTE: As at many schools, incidents of bullying and hate speech spiked at Wichita West just after Donald Trump’s election. Tensions have calmed since then. Fox Peterson says the school is not only trying to improve students’ interpersonal skills, but help them become better citizens as well. 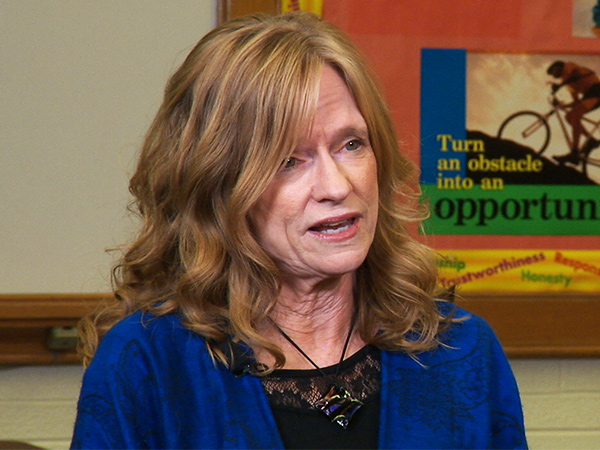 FOX PETERSON: Conflict is a part of the human experience, and teaching about speaking and listening is so very critical. And we’re not working on that very much as a society.

VALENTE: To be sure, the high school still has a fully armed city police officer assigned here throughout the school day.

FOX PETERSON: His role primarily is relationship building, community building, and support of the work we are doing in restorative justice.

VALENTE: The teachers at both Eisenhower and Wichita West say their ultimate aim is to equip students with the tools to make good choices about their lives, inside and outside of school. 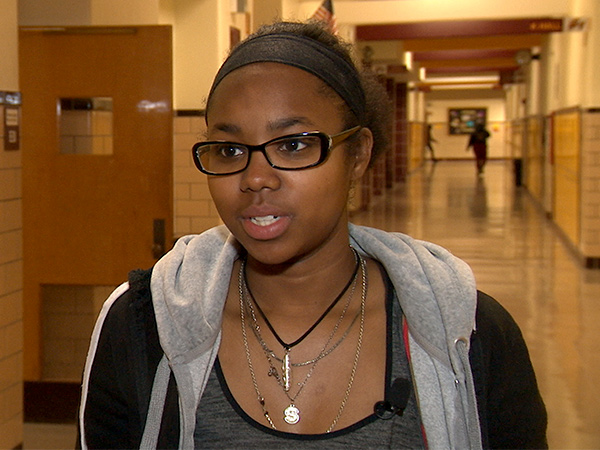 VALENTE: And ultimately it is the students who want to be safe at school and need to feel wanted.

SHAY NICE (Student): I love coming to school. I love, I wake every day in the morning and say, yeah, let’s go to school, let’s do all this and everything, and I’m like, hopefully there’s no conflict between anybody.

VALENTE: As another school day ends, students head out in buses and cars. Their teachers say they hope they will carry with them the skills to be peacemakers, not only in their homes, but also their neighborhoods.

Correspondent Judy Valente reports on conflict resolution circles, a practice rooted in Quaker, Mennonite and North American Indian beliefs, and visits two Kansas schools that use circles to try to end the revolving door of suspension and expulsion of students. Teachers say they hope students will take the peace-making skills they learn at school into their communities.