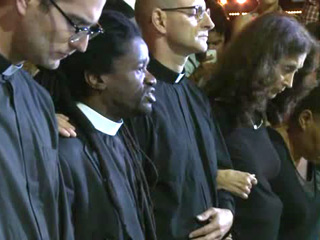 In Ferguson, Missouri, faith leaders were among the dozens arrested while demonstrating against local law enforcement practices. They called it “Moral Monday,” and it capped four days of protests calling for justice in the case of Michael Brown, the unarmed black teenager who was shot and killed by a white officer in August. Tensions have been running high between Ferguson police and the mostly African-American community, with protesters raising concerns about police violence.

Watch our August 22, 2014 conversation with Alton Pollard and Russell Moore on religious responses to Ferguson.