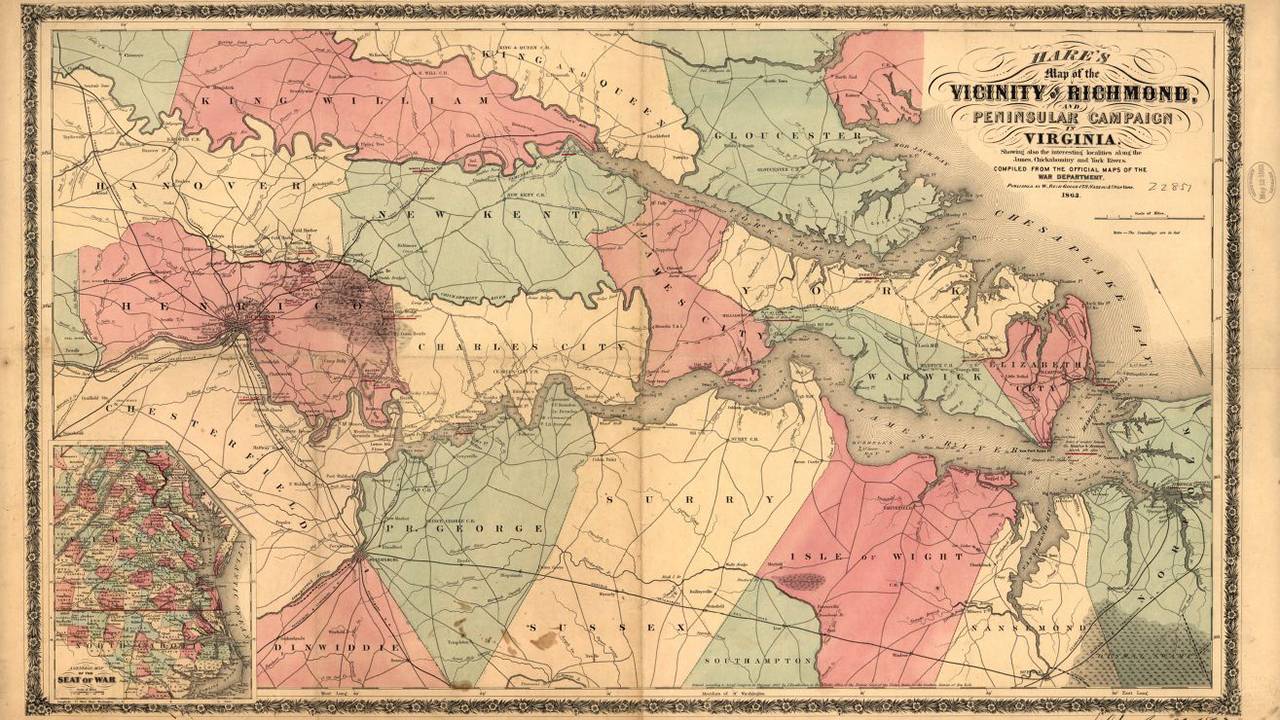 Map of the vicinity of Richmond, and Peninsula campaign in Virginia
Library of Congress

James M. McPherson, Ph.D. is a retired professor at Princeton University, where he taught American history for 42 years. In Mercy Street Revealed's first blog post, McPherson provides background on the Union occupation of Alexandria and the Peninsula Campaign of the American Civil War.

On May 24, 1861, Union troops crossed the Potomac River and occupied Alexandria. The previous day, a majority of Virginia voters had ratified the decision of a state convention five weeks earlier for the state to become part of the Confederacy. Alexandria was thus the first (of many) Confederate cities to be occupied by Northern troops, who remained in control of the city for the rest of the war. Alexandria was located at a crucial strategic site for the defense of Washington, with its frontage on the Potomac south of the capital, and its position as a staging area for Union incursions more deeply into Virginia. The Union army and navy built up supply depots, wharves, and other facilities in Alexandria that played an important role in various military campaigns during the next four years.

One of those military operations came to be known General George B. McClellan's Peninsula Campaign in the spring and summer of 1862. As general in chief of all Union armies from November 1861 to March 1862, and field commander of the Army of the Potomac from March to November of that year, McClellan persuaded President Abraham Lincoln to endorse his plan to transport 110,000 soldiers from Alexandria and Washington down the Potomac River and Chesapeake Bay to Fort Monroe at the mouth of the James River seventy miles southeast of Richmond for a campaign to capture the Confederate capital.

The huge armada of troop transports escorted by warships began leaving the Alexandria area in the last week of March 1862 as McClellan began to build up his force to launch an invasion of the long peninsula of Virginia formed by the James and York Rivers. During the next four months, reinforcements and thousands of tons of supplies went forward from Alexandria to support this effort. Confederate defenders blocked McClellan's force for a month at Yorktown, and then retreated up the peninsula toward Richmond following a bloody battle at Williamsburg on May 5. More battles followed a few miles east of Richmond from May 31 to July 1 that drove back the Union invaders to a new base on the James River halfway back to their starting point three months earlier, at a heavy cost in casualties to both sides.

During the first half of this period, a small Confederate army in Virginia's Shenandoah Valley carried on a diversionary campaign that aided the Confederate defense of Richmond by causing the Lincoln administration to withhold reinforcements from McClellan's army. Many of the wounded from the peninsula and the Shenandoah Valley were transported back to hospitals in Washington and Alexandria, including the Mansion House. In August 1862 the Army of the Potomac was withdrawn from the pensinsula to operate in northern Virginia, and thousands of these troops disembarked at Alexandria at the end of August.