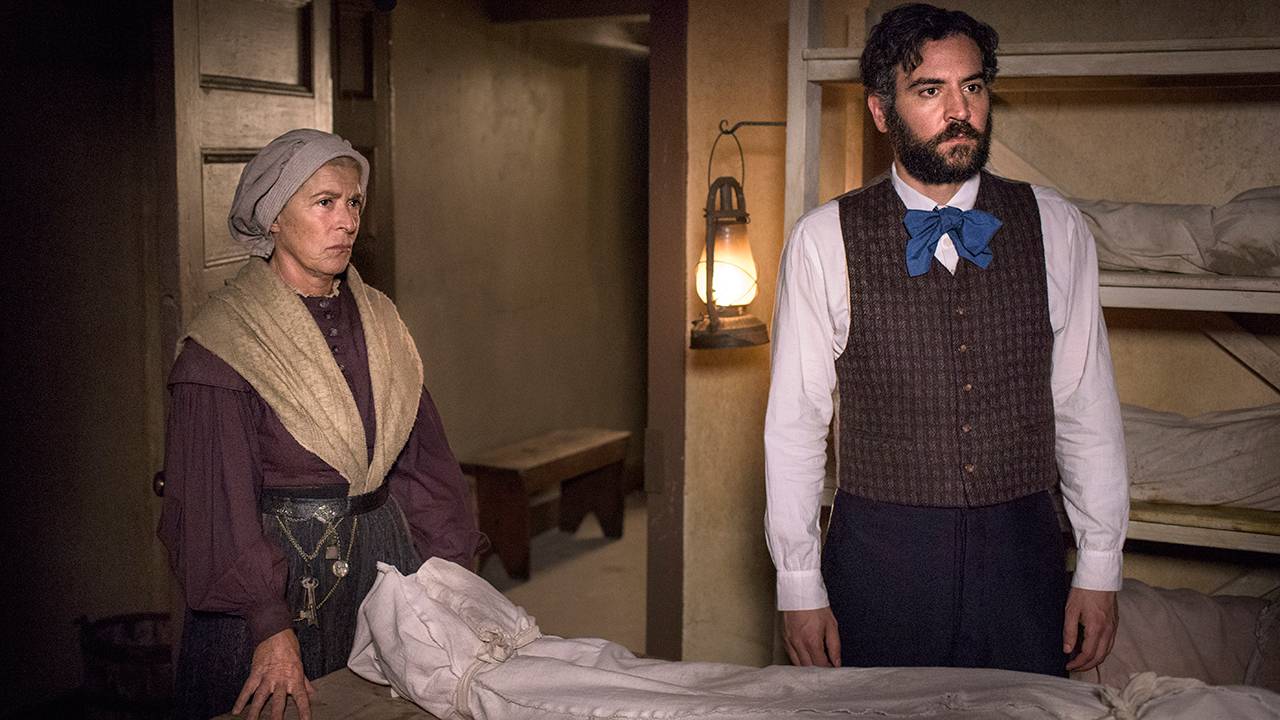 Matron Brannan and Dr. Jed Foster, as seen in Episode 5

Editor's Note: Shauna Devine, Ph.D., is a historian of Civil War and American medicine. She has a Ph.D. in medical history and currently holds a joint appointment as a research fellow at the Schulich School of Medicine and assistant professor in the Department of History at Western University.

In this blog post, Devine details Americans' changing conceptions of death due to the enormous number of Civil War casualties.

Episode Five, aptly entitled “The Dead Room,” takes the viewer beyond the wards of the hospital and into the dead room. The patient, Jeremiah Davis, has succumbed to his injuries and his brothers have come to the hospital to transport the body home for burial. The dead and dying men are vividly pictured in the Mansion House Hospital. The Civil War, as Mercy Street demonstrates, was overwhelming in its scope, and physicians were forced to deal with diseases and injuries that differed both quantitatively and qualitatively from their usual practice patterns in civilian life. Civil War doctors practiced tirelessly in the new general hospitals or the temporary field hospitals; they treated the dying and wounded after horrific battles such as Antietam--where more than twenty-three thousand men were either killed or wounded as a result of the one-day battle.  And, for the larger public, the enormous death toll was a cost that almost seems incomprehensible.

It has long been accepted that 620,000 men died as a result of the conflict but new estimates suggest that far more men died as a direct or indirect result of the war--perhaps as many as 750,000 men a number that would be proportional to 7.5 million people today. Indeed, these estimates, based on the examination of new census records, suggest that 1 in 10 white soldiers died leaving 200,000 war widows. When searching for the larger meanings of the war are these found in ideas about honor, courage, Emancipation, or the "Lost Cause"? Yes of course, on the one hand. But for many Americans the war was completely associated with death--and Americans have long searched for meaning in that loss. Death, in fact, was everywhere and was visible in a way that it had not been before the war. In the process, Americans were forced to reconfigure ideas about death and the Civil War body.

Volunteer nurse Walt Whitman often wrote to his mother about his hospital visits and recorded his experiences, in which he detailed the courage and sacrifice of the young men he met. His diaries and letters provide an excellent insight into how death was perceived during the war as he commented on it frequently and reflectively: "Somehow I got thinking today of young men's death--not at all sadly or sentimentally, but gravely, realistically, perhaps a little artistically."  He found reminiscing about death not gloomy or depressing but rather "soothing, bracing, tonic." He was not shocked by the death he saw but rather admired the bravery exhibited by the men as death approached, "One night in the gloomiest period of the war, in the Patent Office Hospital in Washington City, as I stood by the bedside of a Pennsylvania soldier who lay, conscious of quick approaching death, yet perfectly calm with noble, spiritual manner, the veteran surgeon, turning aside, said to me that though he had witnessed many, many deaths of soldiers and had been a worker at Bull Run, Antietam, Fredericksburg etc., he had not seen yet the first case of a man or boy that met the approach of dissolution with cowardly qualms or terror. My own observation fully bears out these remarks."

Whitman’s diaries and letters also reveal the changing conceptions of death, perhaps acceptance or resignation of impending death that took shape through the course of the war. As one soldier observed in a letter home after seeing a bushel of arms and legs being carried out of the hospital by a surgeon, "one gets used to such seens [sic] quicker than you would think it possible." Indeed, death was so commonplace there was a detachment about it, as Whitman observed of a patient in Armory Square hospital after the Battle of Gettysburg: "Notice the water-pail by the side of the bed, with a quantity of blood and bloody pieces of muslin, nearly full; that tells the story. The poor young man is struggling painfully for breath, his great dark eyes with a glaze already upon them, and the choking faint but audible in his throat. An attendant sits by him, and will not leave him till the last; yet little or nothing can be done. He will die here in an hour or two, without the presence of kith or kin. Meantime the ordinary chat and business of the ward a little way off goes on indifferently."

For many American families it was death without "kin" present that was so different from prewar America where people usually died at home with elaborate death rituals including bathing, grooming, posing, and photographing the corpse. As we see in this episode, there were attempts, where practicable, to have the body sent home, but it was not an easy process. Some families wanted the return of the corpse, if only to see it one last time in a semi-lifelike state, and thus turned to embalmers. Before the war, embalming was used by medical schools to preserve corpses for dissection, but the practice had not been followed in burial for regular citizens; most who wanted to preserve the corpse resorted to coffins on ice. The Civil War, on the other hand, led to an unprecedented demand for embalming. This consisted of a chemical injection (usually through a femoral artery) after which the embalmer would ship the body home. It cost fifty dollars to embalm and send an officer home and twenty-five dollars for an enlisted man. Embalming was used primarily by families with money, a fact not lost on the physician Oliver Wendell Holmes who observed after Antietam that "the slain of higher condition, 'embalmed' and iron-cased, were sliding off on the railways to their far homes; the dead of the rank and file were being gathered up and committed hastily to the earth."

Did American attitudes toward death change during the war then? Interestingly, the war bodies were not hidden; rather, they were very visible through the new medium of photography. As one observer noted, "It seemed that the camera never stopped. Wherever armies went, the Cyclops eye followed. To the battlefield, to the home front, at sea, on the march photographers turned their instruments toward whatever caught their interest." These images depicted the immediacy and realism of war and they were shocking, dramatic, tragic, and shaped the image of the Civil War dead for the American public. As one example, Alexander Gardner's photographs were of particular interest because he focused not merely on the surrounding field or site of battle but rather directly on the dead body. He favored close views, bloated corpses trying to "objectively" demonstrate the destruction caused by the war.  Indeed, of the almost sixty negatives that Gardner and his assistants took after the Battle Gettysburg, three-quarters of the images focused on the dead bodies, dead animals, and mass graves. The images that Gardner and his team produced, simply and provocatively showed the thousands of dead "lying singly" and "heaped in piles" as the casualties were literally "falling in rows." Images like his "Harvest of Death" after Gettysburg, the scene of Lee's defeat in 1863, described by Gardner simply as "devilish!" graphically revealed the dead strewn on the field with shoes removed (for the survivors) and pockets turned inside out, waiting to be buried or claimed by the medical department.  Of such scenes, Walt Whitman would recall "the dead in this war--there they lie, strewing the fields and woods and valleys and battlefields of the south--Virginia, the Peninsula--Malvern Hill and Fair Oaks--the banks of the Chickahominy--the terraces of Fredericksburg--Antietam Bridge--the grisly ravines of Manassas--the bloody promenade of the War department." Whitman lamented the indignity to corpses, which sometimes "floated down the rivers" or "lie at the bottom of the sea"; but perhaps the greatest indignity of all was "on monuments and gravestones, singly or in masses, to thousands or tens of thousands, the significant word Unknown."

The public clamored for these war views and photographs of the dead were displayed widely during the war—in newspapers, journals, at photographic exhibits at various galleries in the Northeast; one of the most popular 1862 exhibits held in New York City entitled, “The Dead of Antietam” drew thousands of visitors. Through this new medium the public was exposed to the stark realities of battlefield wounds, hospital diseases, photographs of embalmed corpses and photographs of medical and surgical specimens which were displayed at the new Army Medical Museum.  Members of the public had few options but to try to understand or come to terms with this new context of death--indignities to the body, vicious wounds and diseases, and often difficulties in organizing a funeral or burial in which the family could attend, say goodbye, and come to terms with the loss. But it was simply not possible to honor all corpses or engage in traditional funerary rites and death rituals during the war, which forced Americans to recast the public image of death.

Walt Whitman, The Wound Dresser: A Series of Letters Written from the Hospitals in Washington During the War of the Rebellion ed. Richard Maurice Bucke (Boston: Small, Maynard and Company, 1898).