Corsets, Crinolines, and the Civil War: The Politics of Women’s Fashions 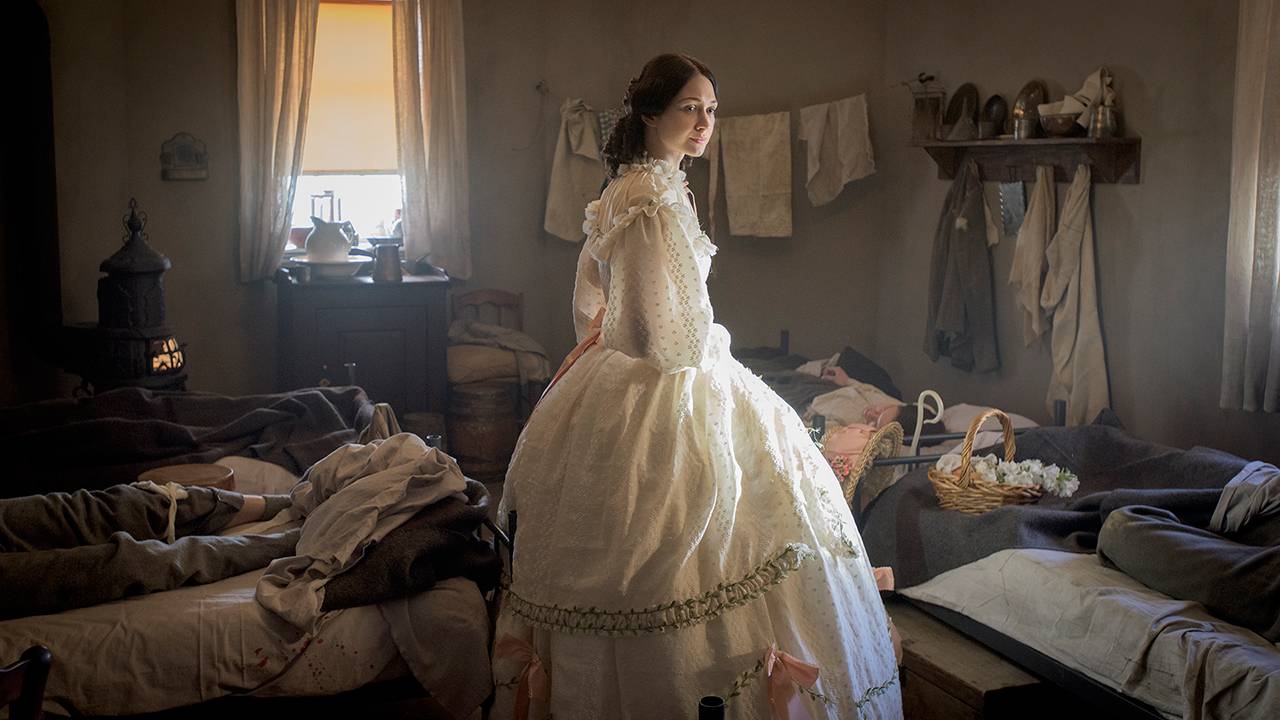 In her first blog post, Jabour explores the history of Civil War-era fashion and why women of that time wore hoopskirts.

The first episode of Mercy Street opens with Emma Green dressing for the day; PBS viewers soon learn that hoopskirts and hospitals don’t mix.  Why did women in the Civil War era sport such attire?  Did anybody object to these impractical and uncomfortable standards of female fashion?

Corsets and crinolines were subjects of public debate in Civil War America. Feminists, dress reformers, and physicians all criticized both the health hazards and the physical restraints of feminine fashions.  Many Americans regarded changing women’s clothing as a necessary precondition to changing women’s lives. Several pioneering women physicians created the National Dress Reform Association in 1856.  These physicians not only advocated doing away with corsets and hoopskirts, but also advocated vigorous physical exercise for women. (Source: Fischer, Pantaloons and Power)

Dress reform was associated not only with physical exercise but also with exercising the rights of citizenship.  Amelia Bloomer, whose newspaper, The Lily, advocated women’s rights, temperance, and other social reforms, popularized a “bloomer costume” consisting of a loose-fitting dress over pantaloons. Prominent suffragists such as Elizabeth Cady Stanton adopted the gender-bending garments and reveled in their newfound freedom. “The whole revolution in woman’s position turned on her dress,” she wrote.  “The long skirt was the symbol of her degradation.” (Source: Stanton, Elizabeth Cady Stanton, p. 173)

Feminist discussions of fashion even pervaded popular literature.  Little Women author and women’s rights advocate Louisa May Alcott, who wrote about her experiences as a Civil War nurse in Hospital Sketches (1863), also wrote a novel, Eight Cousins (1875) in which the heroine recovered her health, strength, and vitality only after giving up her corset.

For most Americans, however, women’s restrictive dress both symbolized and enforced the confines of “woman’s sphere,” and they were as reluctant to loosen women’s corset-strings as they were to relax rules on proper behavior.  Thus, even though Sarah Josepha Hale, editor of the leading fashion magazine for women, had advocated dress reform in the 1840s, by the 1860s the pages of Godey’s Lady’s Book were filled with images of wasp-waisted women whose voluminous hoopskirts—often measuring more than five feet in diameter—made all activities difficult. (Source: Faust, Mothers of Invention, p. 223)  The sheer weight of women’s clothing also posed problems: a fashionable ensemble might weigh as much as twenty-five pounds! (Source: Cunningham, Reforming Women’s Fashion, p. 22)

In the Civil War South, in particular, decisions about dress carried considerable weight—symbolic as well as literal.  While some Confederate women abandoned corsets and crinolines to accommodate the demands of wartime, others insisted on maintaining these trappings of proper femininity and elite class status.  Indeed, the demand for fashionable clothing was so great that blockade-runners smuggled not only military supplies and medical drugs, but also hoopskirts, into the wartime South. (Source: Faust, Mothers of Invention, p. 300)

After all, without fashionable attire to announce their preferred identity, formerly privileged women forced to perform housework without assistance could hardly be distinguished from those they considered their social inferiors. College graduate-turned-chambermaid Georgian Eliza Andrews described her new and unwelcome accessories, an apron and a kerchief, to highlight the changes the war had wrought in her daily life, commenting that so attired, she appeared to be “a proper Bridget”—that is, an Irish-American domestic servant. (Source: Jabour, Scarlett’s Sisters, p. 268)

Clothing choices sometimes reflected the degree to which southern white women continued to conform to conventional expectations of southern womanhood.  Louisiana teenager Sarah Morgan dreamed of adopting both male attire and masculine prerogatives.  “If I were only a man!” she cried.  “Then I could don the breeches, and slay them with a will!” Yet when she had the opportunity to try on her brother’s Confederate uniform, she resisted for fear that her pet canary would witness her in male attire, and when she was forced to refugee in the face of Union troops’ advances in the Summer of 1862, she packed dresses, corsets, combs, toothbrushes, face powder, lace collars, and hairpins in readiness for departure in case of enemy attack and laid out a fresh dress each night so that she could "run respectably." (Source: Jabour, Scarlett’s Sisters, pp. 241, 243)

Other southern women utilized fashion for very different purposes.  African American women used fine clothing and fashionable accessories to challenge racial hierarchies.  White observers got the point, noting that black women “drest in the most outré style, all with veils and parasols,” were among the African Americans who refused to exhibit deference and yield the way to white pedestrians on the sidewalks of southern cities.  Dress also represented freed people’s insistence on defining domesticity and femininity on their own terms.  While white employers complained of black women who “played the lady” and retired from full-time fieldwork to devote time to their families, black mothers insisted on dressing their daughters properly, even when this meant rejecting white women’s poorly fitting—and therefore immodest—hand-me-downs. (Source: Jones, Labor of Love, Labor of Sorrow, pp. 59, 69, 76)

Even Confederate defeat had a fashion dimension.  After he was captured in disguise at the end of the war, political cartoons depicted Confederate President Jefferson Davis in women’s clothing to mock the Confederate president and question his manhood. (Source: Faust, Mothers of Invention, p. 228)

In Civil War America, feminine frills and furbelows were not frivolous; they were expressions of deeply held—and sometimes profoundly radical—political beliefs.