In this blog post, Jabour explains that even though they were denied education in slavery, African Americans were determined to have it in freedom.

After escaping from slavery, Charlotte Jenkins moved to the North and joined the abolitionist movement. Her commitment to advancing African American emancipation soon prompted her to return to the South and establish a school for escaped slaves in the contraband camp outside Mansion House Hospital. “We have to make a change for ourselves,” she declares. Otherwise, she warns, “all we’re going to do is change hands.”

Even with emancipation around the corner, African Americans’ future remained uncertain. Like many of her contemporaries, Charlotte Jenkins believed that education was the key to true freedom for former slaves.

Both northern abolitionists and former slaves regarded education as essential to freedom. Prior to the Civil War, enslaved African Americans had been denied access to education. In many southern states, it was against the law for blacks to learn to read or write.

The legal prohibition of black literacy imbued education with tremendous significance for many African Americans. In his memoirs, Booker T. Washington explained:

I had no schooling whatever while I was a slave, though I remember on several occasions I went as far as the schoolhouse door with one of my young mistresses to carry her books. The picture of several dozen boys and girls in a schoolroom engaged in study made a deep impression upon me, and I had the feeling that to get into a schoolhouse and study in this way would be about the same as getting into paradise.

For their part, northern reformers saw African American education as a necessary prerequisite to wage labor and responsible citizenship. Thus, even before the Emancipation Proclamation took effect on January 1, 1863, African Americans and their allies began to establish schools for contrabands in Union-controlled southern territory, such as Alexandria, Virginia, and the “Sea Islands” off the eastern coastline.

Anxious to demonstrate that emancipated African Americans could become educated and responsible citizens, northern abolitionist organizations raised money to send schoolteachers to the South to teach the contrabands. Although northern teachers also taught adults in evening classes and in Sunday Schools, the majority of their efforts were directed at contraband children. As Maine native Sarah Jane Foster expressed it: “With the children lies the hope of the race.”

While most abolitionist schoolteachers were single white women, educated black women, like Charlotte Jenkins, also participated in the effort to provide education to former slaves. One such woman was Susie King Taylor, who grew up a slave in Savannah, Georgia. Legally barred from learning to read or write, she attended a secret school at the home of a free black woman. To avoid detection, she and her fellow students masqueraded as errand-runners and apprentices, staggering their arrivals and departures to avoid arousing suspicion and wrapping their schoolbooks in paper to disguise them as parcels.

“With the children lies the hope of the race”

Like other African Americans who achieved literacy, Taylor was eager to share her knowledge with others. After escaping to the Union-occupied Georgia Sea Islands during the war, Taylor became one of the few black schoolteachers there. Like Charlotte Jenkins, she met with a warm reception from former slaves. In her memoirs, she recalled that African Americans were “so eager to learn to read, to read above anything else.” 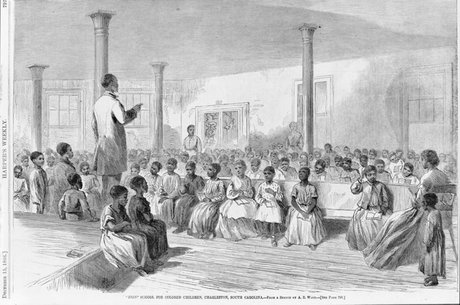 Library of Congress White schoolteachers also observed that African Americans were enthusiastic and capable students. Sisters Lucy and Sarah Chase, who taught contraband children at Craney Island, off the coast of Virginia, in 1863, discovered that their students were eager to learn the mysteries of reading and writing. “I wonder if white children pore over books as my colored little ones do!” exclaimed Sarah Chase. “And I wonder, also, if any white child ever leaped into the mastery of the penmanship of his own name with the agility which characterizes my little children.”

Civil War teacher Sarah Jane Foster concluded that her students’ dedication to learning and their ability to progress in their studies constituted indisputable proof of African Americans’ intellectual equality and potential for citizenship. Foster, who taught first in West Virginia and later in South Carolina, proudly reported that a partially blind boy under her tutelage had “plodded on to the Third Reader,” even though he could see only half a line at a time, and studied both arithmetic and Geography “with the book at the end of his nose.” “Is not that equal to any white person’s application?” she demanded.

The effort these students expended during the Civil War foreshadowed the continuing importance of education for African Americans after the war ended. Enabling their children to attend school was a priority for black parents in the post-war South. Denied education in slavery, African Americans were determined to have it in freedom.

Former slaves regarded education as an essential aspect of freedom: a route to economic success, a guarantee of citizenship, and a badge of equality. At the Colored People’s Convention in South Carolina in 1865 (one of many such conventions in the immediate aftermath of universal emancipation), those in attendance resolved:

Whereas, Knowledge is power, and an educated and intelligent people can neither be held in, nor reduced to slavery ... we will insist upon the establishment of good schools for the thorough education of our children.

Like Charlotte Jenkins, former slaves understood that achieving an education was one way to ensure their freedom. As former slave John Fields—who, like Samuel Diggs, sought higher education to become a physician—observed: “Our ignorance was the greatest hold the South had on us.”

By seeking—and sharing—knowledge, African Americans in the Civil War era were determined to “make a change” both for themselves and for future generations of free black citizens.

Anya Jabour, M.A., Ph.D., has been teaching and researching the history of women, families, and children in the nineteenth-century South for more than twenty years. She is Regents Professor of History at the University of Montana, where she is affiliated with Women’s, Gender, and Sexuality Studies and African-American Studies and has received several awards for teaching and research. She is excited to be sharing her love for the Civil War-era South with PBS.
Read Full Bio | Read All Posts