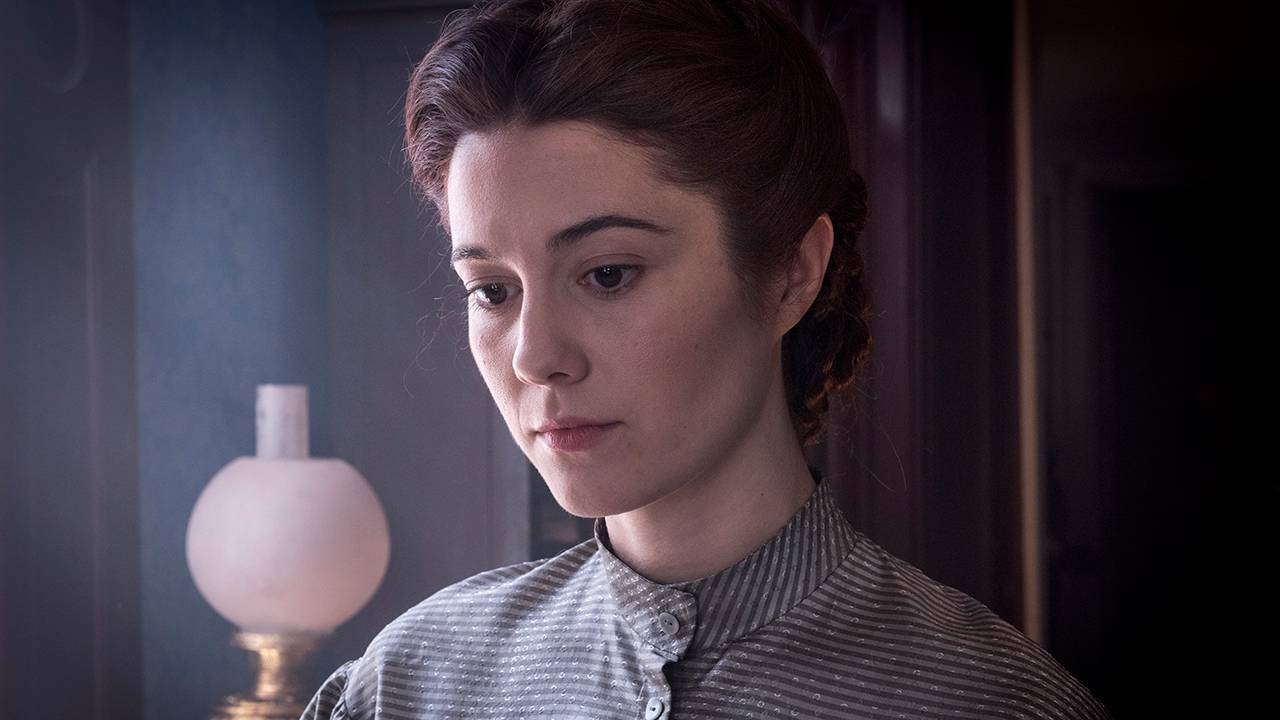 Mary Phinney, as seen in Episode 6

In this blog post, Schultz examines the psychological impacts of the war on nurses, as seen with Nurse Mary in the Mercy Street Season Finale.

By the time we reach the end of Episode 6, Mary Phinney, Baroness von Olnhausen, is a seasoned nurse. She has performed strenuous physical service and has assisted in surgeries and procedures for which she was unprepared, both medically and psychologically. The dream with which Episode 6 begins—of Nurse Phinney’s meeting with Miss Dix in the deserted hospital—suggests the psychological adjustments that relief workers had to make if they were to be of use. On the wards later that day, Nurse Phinney learns that Private Philip Starks, whom Dr. Hale refuses to aid, has deserted because his wife Addie has left him for another man. In a climate where desertion was a crime punishable by death and a deserter’s motives were of no consequence to officials ready to render military justice, Nurse Phinney offers understanding and mercy to a man who chooses to save his marriage ahead of any other consideration.

Despite the hardening process that female nurses inevitably underwent, they could not always let go of patients whose circumstances had touched them in some profound way. The inability to part is visible when Nurse Phinney declares to Dr. Foster at Starks’s bedside, “I can’t leave him!” and then weeps upon his death. Civil War nurses tell us that they could not always avoid tears, and many understood both their cathartic power and the need to control their flow. Early in her service at Mansion House, the real Mary Phinney von Olnhausen wrote about the difficulty of separation when a soldier’s death was imminent: “I never leave a man to sleep or to eat when I think he will soon die; it seems at least as if a woman ought to close these poor fellows’ eyes; no mother or wife or sister about them. I feel that I must be all to them then, and the last words of many dying men have been thanks for what I have done….Everybody said when I first came, ‘Oh, you’ll get over this after a while and be hard just like us,’ but I never can.  If possible, I feel more than then.” And like the dying Starks, who mistakes the cinematic Nurse Phinney for his wife Addie, soldiers in the last throes of living projected their own familial delusions upon their caregivers. Eliza “Aunt Lizzie” Aiken, 44 years old when the war began, was flagged down by a delirious 19-year-old evacuated from Vicksburg in 1863, who believes that she is his mother. His comrades help Aunt Lizzie play the role by instructing her to call him “Tommy,” while Tommy urges her to join him in singing a favorite hymn of his sister’s. As the young soldier nears death that night, losing sight, he calls out, “Mother, are you here, don’t let me die alone.” Aiken laments that Tommy’s mother does indeed arrive late the next morning, when he has already passed away. The surgeon in charge cannot bear to deliver the bad news himself, calling upon the nurse to do it—a last resort, which physicians, unable to absorb the emotional residue of such scenes, often left to their female staff. When Aunt Lizzie escorts the bereaved mother to the dead house, where thirty other soldiers lie, she is astonished by this woman stranger’s intense emotional gesture. Declaring her undying love and friendship and embracing Aunt Lizzie, Tommy’s mother completes a sacred circuit: the attendant who sees the beloved pass into the afterlife symbolically offers the family its closest link to eternity.

Jane Stuart Woolsey, one of seven daughters of the New York clan known for wartime nursing, wrote about the bonds that caregivers inevitably developed with their charges: “Seeing the men constantly, learning their fancies and home habits, noticing the changes in their condition from day to day, gave real assistance in the special business of feeding them; and talking with them, writing for them, helping them invent occupations and amusements.” Soldiers’ gratitude might take the form of physical contact, like that of the patient aboard the City of Alton steamer in February 1863, who grabbed Emily Parsons’ hand and would not let go. One of the few women who sought nurse training before entering the service, Parsons, who left her Cambridge home to attend courses at Massachusetts General Hospital in Boston, noted that men of the rank and file also extended sympathy and reassurance to one another: “I saw one poor fellow assisted on board by his comrade; he helped him to his bed, and then the two rough men put their arms ’round each other, and with the tears running down their cheeks, kissed a goodbye as tenderly as two children.” Louisa May Alcott explored the same phenomenon in Hospital Sketches. Such displays of emotion on parting were as common among men as they were between women and men in an era when men’s tears did not translate into a loss of masculinity.

Attachments that grew in medical settings during the war sometimes extended well beyond it. Illinois’ Mary Anne “Mother” Bickerdyke was still receiving letters from the soldiers she had cared for at Pittsburg Landing and Fredericksburg three decades after the war, and Fannie Oslin Jackson, a Georgia woman who devoted herself to a Union hospital near Resaca, corresponded for fifty years with the family of an amputee whom she had attended. Harriet Eaton’s diary provides one of the more fascinating examples of the endurance of the nurse-patient bond and its maternal (and potentially romantic) hold. Devout widow of a Baptist minister, Eaton made the acquaintance of Maine Private Nathaniel Jaques at City Point in 1864 and oversaw his conversion to Baptism. So thrilled was she by the success of her proselytization that she wrote to Jaques daily after his return to his unit and even sent him gifts. So long-lasting was her regard for him that, after the war, she opened a hardware store in Tioga County, New York—five hundred miles from her home in Portland—and made Jaques her chief employee.  The 1870 census showed them living in the same Tioga County boarding house.

The bonds of sympathy that hospitalized soldiers exchanged with their caregivers spoke to the embodied impact of their suffering. Pain and discomfort made them childlike and utterly dependent on the people who reminded them of ministering mothers, wives, and sisters—if they were fortunate enough to be quartered in a hospital where women served.  In turn female relief workers reacted with pity and pathos at the sight of men’s physical vulnerabilities. The ones who in time earned the designation “veteran” understood the integral relationship between physical and psychological pain; how protracted physical suffering led to depression and feelings of interminable regress. In this sense, as the war droned on to a second, third, and fourth year, hospital staff witnessed the emergence of a medical war that held all of its combatants prisoners.