The Bricks We Stand On
Douglas A. Blackmon shares how the project Slavery by Another Name evolved. 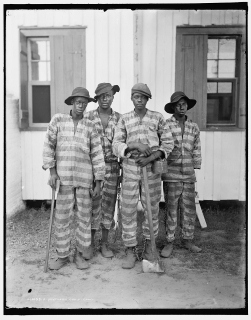 Slavery by Another Name “resets” our national clock with a singular astonishing fact: Slavery in America didn’t end 150 years ago, with Abraham Lincoln’s 1863 Emancipation Proclamation.  Based on Douglas A. Blackmon’s Pulitzer Prize-winning book, the film illuminates how in the years following the Civil War, insidious new forms of forced labor emerged in the American South, persisting until the onset of World War II.

“It is rare to have the opportunity to bring to television a story that, outside of academic circles, is virtually unknown,” says tpt National Productions’ Catherine Allan, executive producer of the 90 minute documentary for PBS.  “In telling the story of what happened to African Americans over the 80 year period of “neo-slavery”, we hope to add a significant new facet to America’s ongoing discussion about race.”

While to most Americans this is entirely new history, for journalist Blackmon, the film explores a very familiar—and personal—topic.

“It feels like I have been writing about race and America's tortured struggles with it for all of my life,” said Blackmon. “I grew up in a little town in the Mississippi Delta in the 1960s and 1970s, a place where the country's racial turmoil was playing out very vividly and locally.”

“The book in some respects began with an essay I wrote in the 6th grade about a farm labor strike on the outskirts of my town in the mid 1960s. I was intensely aware of what was happening, and the stakes involved, and began trying to understand how such a scrambled set of circumstances had come to pass. “

Blackmon’s lifelong quest for reasons behind America’s struggles led to his bestselling book.  And as the book was translated into a documentary, Blackmon served as the film’s co-executive producer.  “Making the film was a thrill,” said Blackmon.  “In the book I tried so hard to treat the victims of enslavement as three-dimensional, real people, with complex, valuable lives that had been wrecked by these terrible injustices.”

“But there is only so much you can do with the printed word. Seeing those characters portrayed by actors and giving voice to their words from a century ago was really powerful.”

The film, shot on location in both Birmingham and Atlanta, is built on Blackmon’s extensive research, as well as interviews with scholars and experts about this historic period.  It also incorporates interviews with people living today, including several African American “descendants” of victims of forced labor who discovered their connection to this history after reading Blackmon’s book.

“As I’ve traveled, discussing the book and meeting readers, a stream of African-Americans have related to me how the book made them reassess their own family histories,” said Blackmon. “So many people tell me they were uncertain about accounts passed down by forebears which seemed to suggest that families were still being held as neo-slaves in the 1940s, 1950s and 1960s. Then they read the book and realized that in fact the old stories are very likely to be true–that thousands of people were living in a state of involuntary servitude well into the lives of millions of Americans who are still alive today.”

“Doug’s book really made this topic explode out into the open, so we could see how the subjugation of African-Americans was systematically accomplished, through the state governments and through the lack of federal involvement, after Reconstruction and up to the beginning of World War II,” said producer/director Samuel Pollard.  “We’re in this wonderful unique opportunity with Slavery by Another Name to again go back and understand the African-American experience in the South from a perspective that hadn’t really been defined.”

In addition to descendants of forced laborers, Blackmon and the filmmakers also explored the “aftershocks” experienced by those whose family heritage features purveyors of the brutal practices.  Cristina Comer, the great-great-granddaughter of Alabama governor B.B. Comer, learned that her family members were active participants in the brutal system.  Comer described her reaction to this information, and her ongoing emotional struggle: “Everything that I looked at had a connection to the privilege that I had experienced, which came at the cost of many black people’s lives. And the sorrow and the deep grief that I felt over that– I can still feel today.”

The film was written by Sheila Curran Bernard, engaged from preproduction through editing to help transform the 400-page book into a powerful, 90-minute movie.  ”The book’s overall argument and the depth and scope of its research, obviously, gave me a tremendous head start,” said Bernard.  “You play to the strengths of the medium and trust that the film is part of an overall project, which in this case includes not only a best-selling book but also a range of newly-created, web-based resources.”

“In total, the documentary took three years from first optioning the book to broadcast on PBS,” said executive producer Catherine Allan. “It has been an enormous—and very worthwhile—experience.”