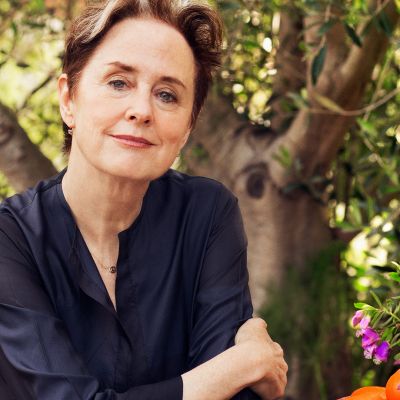 Alice Waters
Chef
Born: Apr 28, 1944
KNOWN FOR
Farm-to-Table Cuisine
QUOTE
"I'm just convinced that having this understanding about food will change the way we live in this world."
AMERICAN MASTERS FILM
Alice Waters and Her Delicious Revolution
(Mar 2003)
Directed by Doug Hamilton

Alice Waters lies in bed at night worrying about what to feed you. She knows that she can make you happy. She also knows, in her hidden heart, that if she can find the perfect dish to feed each person who comes to her door, she can change the world.

Alice didn’t set out to change the way America eats. She just wanted to feed her friends. Having been to France, she had seen the way a good bistro could become the heart of a neighborhood, a place where people went for comfort and sustenance. She was not a professional cook, but she enjoyed feeding people, and she envisioned a cozy little café, which would be open every day for breakfast, lunch, and dinner, a place where everyone from the dishwashers to the cooks would be well-paid, a sort of endless party where everyone would have fun. Reality soon set in. Faced with financial ruin, Chez Panisse was forced to become a real business. Still, the dream did not die. It just changed.

“I was more obsessed,” Alice explains. If she was going to have a restaurant, it was going to be the very best one she could possibly manage. Even if that meant rethinking the whole concept of what a restaurant might be.

She began with the ingredients. Every chef dreams of great produce, but most make do with what is available in the market. Not Alice. Disgusted with the fish that was sold in stores, she bought a truck and sent someone down to the port to find fishermen as they docked their boats. When she could not find the baby lettuces she had loved in France, she tore up her backyard and grew her own. She found foragers to hunt for mushrooms. She persuaded farmers to let their lambs run wild through the hills. She demanded better bread. Before long, she had developed an entire network of people producing food just for her.

The results were electric. Chez Panisse served only one meal a day, but people reserved months ahead of time and took their chances. You would find them shaking their heads over the menu, wailing, “Chicken? I’ve come all the way from Maine for chicken?” Then the dish would arrive, and they’d look down with dismay and say, “It’s just a piece of chicken,” as if they had somehow expected the poor bird to turn into a swan as it cooked. But they’d waited months for the reservation, so they would take a bite of the chicken and a sort of wonder would come over their faces. “It’s the best chicken I have ever tasted,” they’d whisper reverently. “I never knew that food could taste so good.”

And Alice, walking by, would smile her secret little smile. Because once again, she had done it. She had given them food that they would remember, a taste that would linger long beyond that night. And they would know, ever after, how a chicken raised in the open air, fed on corn, and cooked with care, could taste.

She knew that they would carry that flavor away with them, and that every time they ate a chicken, no matter where it might be, they would remember.

There is only one Chez Panisse. In this age of multiple restaurants, the restaurant has no clones in London, Las Vegas, or Tokyo. Because Alice Waters has more than money on her mind. And she has now turned her attention to the next generation. Her latest project? Feeding the children. She wants every school in America to have a garden and every child to have an opportunity to discover the taste of fresh food.

Her fight goes on. Her revolution continues. She knows that all it takes is one taste. It just has to be the right one.

This essay has been excerpted from AMERICAN GREATS, by Robert Wilson and Stanley Marcus (The Perseus Books Group, 2000).

Major funding for Alice Waters and Her Delicious Revolution is provided by Feast it Forward.

More From Alice Waters and Her Delicious Revolution (5)