John Muir in the New World

This documentary delves into John Muir's life with reenactments throughout the majestic landscapes he visited: Wisconsin, Yosemite and the Sierra Nevada, the Alhambra Valley of California, and the glaciers of Alaska. This Scottish American is remembered as the father of the environmental movement. John Muir in the New World airs nationally Monday, April 18 at 9 p.m. (check local listings).

Preservationist, naturalist, author, explorer, activist, scientist, farmer, John Muir (4/21/1838 – 12/24/1914) was all these things and more. Nearly a century after his death, this Scottish American is remembered and revered as the father of the environmental movement and the founder of the Sierra Club, the oldest and largest grassroots environmental organization in the United States. American Masters continues its 25th anniversary season with John Muir in the New World, airing nationally Monday, April 18 at 9 p.m. (ET) on PBS (check local listings or watch the full film online) in honor of Earth Day (4/22) and John Muir Day (4/21). Explaining his impact then and now, this 90-minute documentary delves into Muir’s life and influences with reenactments filmed in high definition throughout the majestic landscapes he visited: Wisconsin, Yosemite and the Sierra Nevada, the Alhambra Valley of California, and the glaciers of Alaska. Placing our nation’s most important natural assets in a cultural and social context, John Muir in the New World is a timely reminder of America’s unique and, ultimately, threatened eco-systems.

“It’s incredible what we owe to John Muir and, in our era of Katrina and oil spills, how very much we should revere his message today,” says Susan Lacy, series creator and executive producer of American Masters, a seven-time winner of the Emmy® Award for Outstanding Primetime Non-Fiction Series. The series is a production of THIRTEEN for WNET — one of America’s most prolific and respected public media providers.

A lover and champion of the American wilderness, Muir believed that it was our responsibility as citizens to protect our natural surroundings. Through his tireless advocacy and his writings, Muir helped preserve the Yosemite Valley, led the fight against the Hetch Hetchy dam – the first nationwide battle of the environmental movement – and was the force behind the creation of the National Park Service. John Muir in the New World explores the influence of his Calvinist father, Daniel; the writings of Alexander von Humboldt and Ralph Waldo Emerson; his friend and mentor Jeanne Carr; marriage to Louie Strentzel; and friendship and work for Robert Underwood Johnson, editor of The Century Magazine; to illustrate how Muir developed his ideas about nature and became a respected scientist, writer and “publicist for nature” during a critical period in U.S. history.

Emmy-winning Director/Producer/Writer Catherine Tatge conveys Muir’s passion for and spiritual bond with nature through reverential reenactments of his life-changing journeys: his 1,000-mile walk from Indianapolis to the Gulf of Mexico, his years living in the Yosemite Valley wilderness and climbing the Sierras, his continued study of glaciers in Alaska, and his life as a farmer with his family in Martinez and the Alhambra Valley. Mountaineer Joe Butler portrays the young Muir; photographer and mountaineer Howard Weamer, the winter caretaker of Yosemite’s Ostrander Lake Ski Hut, portrays the older Muir; and Patsy Fulhorst, a school teacher in Yosemite, avid trekker, naturalist and hiker, portrays Jeanne Carr.

“I enlisted a team of experts to ensure the accuracy and integrity of everything we captured on film, right down to every plant specimen and bird call,” explains Tatge about the exhaustive research that went into making John Muir in the New World. Among them, Emmy-winning sound recordist and international acoustic ecologist Gordon Hempton provided the film’s natural sounds based on Muir’s Yosemite writings, which were integrated with the original score by Garth Neustadter, and Bob Roney a.k.a. “Yosemite Bob” served as a consultant and guide. Narrated by Jane Alexander, the film also features readings from Muir’s journals and articles, as well as interviews with Allison Chin, President of the Sierra Club (2008-2010), environmental historians, scholars, and others.

John Muir in the New World is a co-production of Global Village Media and THIRTEEN’s American Masters for WNET. Catherine Tatge is producer, director and writer, Leslie Clark is producer and writer, Bob Elfstrom is director of photography (recreations), Dan Kowalski is director of photography (nature footage), Tom Haneke is editor, and executive producers are Peter Evans and Steve Boyd. Dominique Lasseur is executive producer for Global Village Media. Susan Lacy is the series creator and executive producer of American Masters. Major funding for John Muir in the New World has been provided by the National Endowment for the Humanities.

American Masters is made possible by the support of the National Endowment for the Arts and by the Corporation for Public Broadcasting. Additional funding for American Masters is provided by Rosalind P. Walter, The Blanche & Irving Laurie Foundation, Rolf and Elizabeth Rosenthal, Cheryl and Philip Milstein Family, Jack Rudin, The André and Elizabeth Kertész Foundation, Michael & Helen Schaffer Foundation, and public television viewers. Major funding for this program was provided by the National Endowment for the Humanities. Additional funding for this program was provided by The Russell Family Foundation, Roger Jordan Fund of the RSF Global Community Fund, Wisconsin Humanities Council, Walter Henry Freygang Foundation, Billings and John E. Cay III, and Craig McKibben & Sarah Merner. 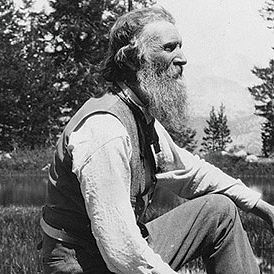 John Muir
Preservationist, Activist, Writer
Apr 21, 1838 - Dec 24, 1914
VIEW MASTER COLLECTION
QUOTE
"When we try to pick out anything by itself, we find it hitched to everything else in the universe."