The scene represents a Sunday Fair in Paris. There is a traveling Theatre, and three Music Hall turns are employed as Parade. There are the Chinese Conjuror, an American girl, and a pair of Acrobats. Three Managers are occupied in advertising the show. They tell each other that the crowd in front is confusing the outside performance with the show which is about to take place within, and they try, in their crudest fashion, to induce the public to come and see the entertainment within, but the crowd remained unconvinced. After the last performance, the Managers make another effort, but the Theatre remains empty. The Chinaman, the Acrobats, and the American girl, seeing that the Managers have failed, make a last appeal on their own account. But it is too late.

BY SHERI CANDLER
Robert Joffrey had an affinity for preserving the works of ballet masters. One of the masters he truly appreciated was Leonide Massine. Massine was a Russian born dancer who trained with the Imperial Theater School and performed both with the Bolshoi and as an actor with the Maly Theater. He was chosen by Sergei Diaghilev to become part of the Ballet Russes in 1913 as a possible replacement for Nijinsky and by 1917 had become a principal dancer and choreographer with the company.

Robert Joffrey first encountered Massine in 1940 during his very first experience on a professional stage in Michel Fokine’s Petrouchka with the Ballet Russes de Monte Carlo. While Joffrey had a non dancing role, Massine played the title character. In Sasha Anawalt’s book The Joffrey Ballet: Robert Joffrey and the Making of an American Dance Company, Joffrey said, “I remember Massine dancing so brilliantly, and he became my idol. I thought he was wonderful. And his career-he was a choreographer, then he was a director-all of that sort of made me want to do things.”

In 1969, Joffrey was ready to seek out Massine, reconnect with him and revive some of his work. He was especially interested in one of Massine’s most ambitious collaborative pieces, Parade.

Created for the Ballet Russes in 1917 from a scenario by Jean Cocteau and music by Erik Satie, Parade was subtitled “a ballet realiste” for it showed the grayness and dullness of big city life and commerce against the color, excitement and playfulness of the circus. It symbolized modern man’s loss of his inner creativity among more industrialized pursuits.

The elaborate sets and costumes were designed by Pablo Picasso. His costume design would showcase cubism as a new direction in modern art. Massine choreographed and dance the leading role of The Chinese Conjurer. For Satie and Picasso, it marked the first time either had worked with a ballet. It was also the first time that “noise making” instruments were featured in a classical score, giving the sense of a real city. Milk bottles, typewriters, pistol shots, sirens and a fog horn were all heard within the piece. Some have called this the first multimedia art ballet in that the collaboration included a writer, a modern art painter, an avant garde music composer and a dance choreographer. It was an unique collaboration for its time. Massine’s choreography also mixed in every day movements and simple acrobatics with classic ballet technique, something Joffrey and Gerald Arpino would also freely mix in their own choreography.

By 1973, Joffrey was ready to revive this 30 minute piece which had only been seen 9 times since its premiere and never in America. He said at the time, “sometimes in striving to create only new ballets, we overlook certain ballets that were very important historically in dance. One was Parade.”

Joffrey had received the blessings of both Picasso and Massine, but not without extensive persuasion. Massine viewed this masterpiece as the work of an inexperienced choreographer and did not want it revived. Finally, he relented, but only on the condition that the Joffrey Ballet first include two of his other works into their repertoire.

Joffrey was committed to bringing the piece back to life as authentically as possible. He assembled a top notch design team for the recreations of the set and costumes. Picasso’s elaborate set pieces were reconstructed by Kermit Love (creator of Big Bird for Sesame Street), costumes and decor were researched and duplicated by Willa Kim and Edward Burbridge.

Massine worked with the Joffrey Ballet on the two conditional revivals of his work, Le Tricorne in 1969 and Le Beau Danube in 1972–so the dancers were well acquainted with his style and unique communication skills when it came time to start on Parade. In the film, principal dancer Gary Chryst describes how Massine gave explanations for the facial expressions Chryst should use while dancing the role of The Chinese Conjurer: “I have to say, we thought he was out of his mind because he was asking us to do strange things with our face. Flex your cheekbones…What? What does that mean? And you swallow an egg and you make your eyes disappear. He [the Chinese Conjurer] was a magician. So the images were things of being able to make fire come out of your mouth; grabbing it out of the air and then [miming it] to come out. Taking an egg and swallowing the egg and then making it come out of the foot. I mean the imagery was wild.” 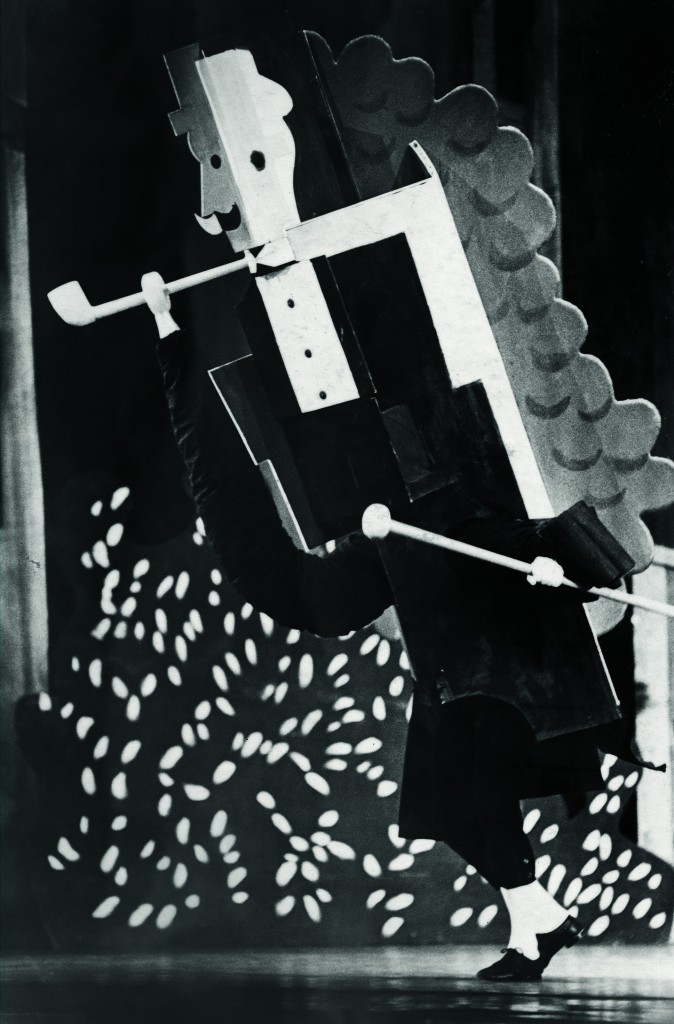