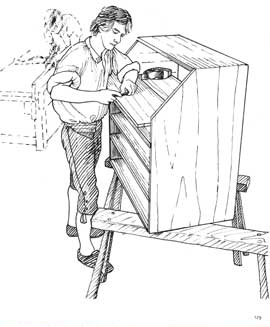 CabinetCabinetmakers seem like such nice people, but who cuts the walnut’s crotch and exposes its storm-stressed flames in a window of polished shellac? Who stuffs balls into the claws of beasts and makes them into a chair leg? Even the gnarliest burl is helpless as they saw it into slices, level it with toothed scrapers, and choreograph the pieces into a symmetrical dance. Cabinetmakers capture wild natural beauty and cage it within classic geometry — yet they hide their own sweat within secret joints that show nothing of the inner connections. In Georgian cabinetmaking, the sightly effect was to reveal the wood but Conceal the joints. Contemporary cabinetmaking comfortably reveals both. Dovetails give you that choice. They can be fully exposed, half-hidden, or kept secret. Dovetails are fundamental to cabinetmaking, but wood is wood, and the mechanics of joining it spans all the trades. Now, the multiple-dovetail joint has transcended even its functional identity to become the icon of handcraft in wood. 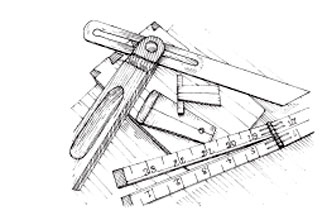 Dovetail markers and a sliding bevel. But the mechanics never go away. When you pull out a drawer, you see splayed dovetails on the sides and trapezoidal pins on the end grain of the drawer front. You certainly could make a dovetailed drawer with the tails on the front and the pins on the sides, but such a construct would orient the weakness of the joint in the same line as the greatest load. Dovetails are the strongest of joints, except in one direction.

So, first, consider mechanics, even if you let aesthetics make the final decision. Second, how much joint do you want exposed? A Charleston desk joined with secret miter dovetails shows no joint at all. A Shaker desk with through dovetails shows joints at all corners. In their drawers, however, they all look the same, both pieces joined with half-blind dovetails. We’ll take each of these joints in turn, starting with a through dovetail for a chest.