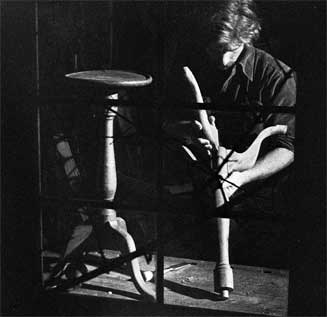 It snowed and snowed, the whole world over, snow swept the world from end to end. A candle burned on the table, A candle burned. Boris Pasternak, Dr. Zhivago (1958)

One February a few years back, terrible ice storms savaged the county, taking down a lot of well-loved trees. One elderly neighbor in town lost a huge walnut tree that fell and crushed her garden shed. The loss must have upset her, as she and the tree had grown up together, but practical as ever, she had one of the neighborhood kids fetch me and offered me the wood in exchange for cleaning up the mess and making her a little something from it. There were some fine logs in the tree, but we both knew that no sawmill would touch it for fear of the costly damage the buried nails and sundry spikes that often inhabit yard trees could do to their saws. It was a good deal for us both.

I get most of my good timber in trades of this sort. One of the best trades for walnut, cherry, or good maple logs is an arrangement that begins, "Let me have that dead tree and I'll make you a candle stand out of it." These classic and useful tables can be made in just a few hours by hand and foot power, so both parties do well in the bargain.

The basic candle stand consists of six parts—three legs, a pedestal, and the top and its supporting block. The stand that I make is in the Queen Anne style, with cabriole legs (meaning they are shaped like the leg of a leaping goat) and a lathe-turned, classical vase-shaped pedestal or column (for instructions on making a candle stand without using a lathe, click here. The connection between the legs and the column is formed by sliding dovetail joints. These joints are a neat trick: the legs slide up into the column from the bottom in a clever puzzle arrangement that is not hard to do but is very satisfying. The top and its supporting block are also turned out on the lathe, and there's a bit of a trick to them too.